The situation of disabled Egyptians is not improving and may further deteriorate with the prime minister’s decision to affiliate the National Council for Disability Affairs with the Ministry of Social Solidarity. 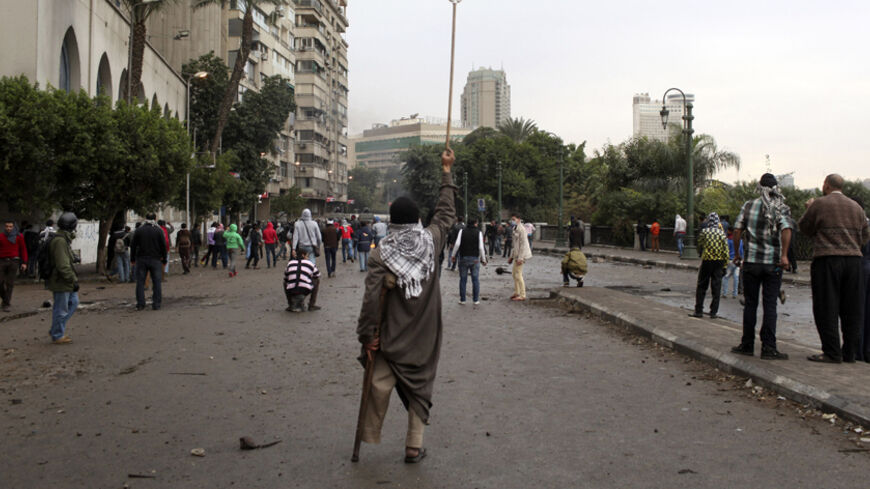 CAIRO — Egypt's 2014 constitution granted its more than 10 million disabled citizens numerous rights. Some of them, however, think the state has not taken any new steps to improve their condition. Others believe that progress is merely slow, while some hold that their condition is actually getting worse.

In September, Prime Minister Ibrahim Mahlab decided to affiliate the National Council for Disability Affairs (NCDA) — tasked with supervising and controlling government services for people with disabilities — with the Ministry of Social Solidarity. Like most specialized councils, the NCDA was previously under the prime minister's authority.

Hossam al-Massah, secretary-general of the NCDA, submitted his resignation in protest and criticized the decision on a television program, where the discussion devolved into an argument between him and Minister of Social Solidarity Ghada Wali. The prime minister subsequently accepted Massah's resignation.

The decision raised the ire of many disabled people, who protested at the NCDA, leading Mahlab to retake control of the NCDA but entrust the minister of social solidarity with overseeing NCDA affairs. According to the decree, the minister shall enjoy all the powers that the prime minister had with respect to the disabled, including coordinating with other ministries to meet their needs.

Sameh Fahmi, an activist in the field of disabilities and chairman of the Disabled Committee in the Tahya Masr movement, told Al-Monitor that the state has always ignored the disabled, including under the rule of President Anwar Sadat. In 1975, the state had approved Law no. 39, which stipulated the right of the disabled to 1% of available jobs, later amended to 5% in 1982. “Under Sadat and [President Hosni] Mubarak, the state failed to comply with this quota. With the rampant corruption of the Mubarak era, some paid bribes to [employees] at the Rehabilitation Department of the Ministry of Social Solidarity to obtain certificates saying they were handicapped and get a job without being brought before medical committees,” Fahmi said.

Imran Khalifa, spokesman for the Independent Association of the Disabled, told Al-Monitor, “The state took advantage of the disabled. It received foreign aid worth tens of millions of dollars to improve the conditions of the disabled without spending this aid on them, knowing that they were suffering from poverty and had no place to sleep.”

“Under [President Mohammed] Morsi, the state ignored the [mandated] appointment of disabled people in 5% of the available jobs. It instead gave the chance at government jobs to those affiliated with the Muslim Brotherhood, so that they could get more control over the state. This prompted us to form the association to defend our rights,” said Khalifa.

During the transitional period after June 30, 2013, Ahmed El-Borai, then minister of social solidarity, decided to disqualify disabled persons from social security pensions if their caregiver earned an income of 600 Egyptian pounds ($84) or more per month, Khalifa said.

Hassan al-Sibai, head of the Egyptian movement to empower people with disabilities, told Al-Monitor, “People with disabilities were marginalized, especially under the constitution of the Brotherhood. But the current constitution grants the disabled 80% of the rights that they dreamed of, and the current government started activating the rights of the disabled by granting them 5% of the job opportunities. The Ministry of Social Solidarity announced a recruitment process to select those disabled candidates most qualified for vacant jobs at the Ministry of Education. There were about 1,500 jobs available, in addition to about 400 opportunities in the private sector.” Fahmi said that not everything announced by the Ministry of Social Solidarity is correct and that there is a lot of conflicting data regarding employment opportunities and application of the 5% quota.

The current issue consists of defining the relationship between the NCDA and the Ministry of Social Solidarity. Sibai said that there is a difference between tasking the minister of social solidarity, instead of the prime minister, with overseeing the affairs of the council and affiliating the NCDA with the ministry. He explained that the NCDA is still independent administratively and financially from the ministry, and that having the prime minister or minister of social solidarity take over its leadership is a temporary measure, until the election of a new parliament, which will oversee the NCDA.

Nabil Salem, vice president of the International Paralympic Committee, told Al-Monitor, “Transferring responsibility for the NCDA from the prime minister to the minister of social solidarity will complicate some measures. It is better that the prime minister takes care of the NCDA, as this gives the council greater authority. Better yet, the NCDA should be affiliated with the president of the republic. When Jehan Sadat was the head of the al-Wafa’ Wa Amal [Faith and Hope] Rehabilitation Center for the disabled, she managed to provide cars and job opportunities for the disabled as she was the wife of the president of the republic.”

Al-Monitor sought comment from the minister of social solidarity and the ministry official spokesman for this report, but received no response.

Sibai said there has been improvement in the situation for the disabled and that it will keep improving with the restructuring of the NCDA and with the election of the next parliament. The legislature includes a quota of eight elected seats for the disabled along with appointments to two additional seats by the president of the republic. Sibai added, however, “This improvement is weak because of the crises plaguing the state.”

Khalifa said, “The condition of the disabled has not improved, and neither the NCDA nor the government have offered anything except for attempted appointments of well-known faces in the management of the NCDA to exploit them in obtaining foreign aid that wouldn’t ultimately be spent on improving our affairs. The NCDA has no clear authority.”

Fahmi said that the condition of the disabled will be determined after the election of the parliament, which will enact constitutional articles concerning the disabled into laws that defend their rights and improve their condition.

Khalifa said, “The case of the disabled will not progress unless a supreme council with real powers is created or a ministry is formed for a few years to take care of the disabled until their conditions improve.”