Can women, Copts make it to parliament without the quota?

Women and Copts have been marginalized in the Egyptian political scene, as their representation in parliament has not always been fair. 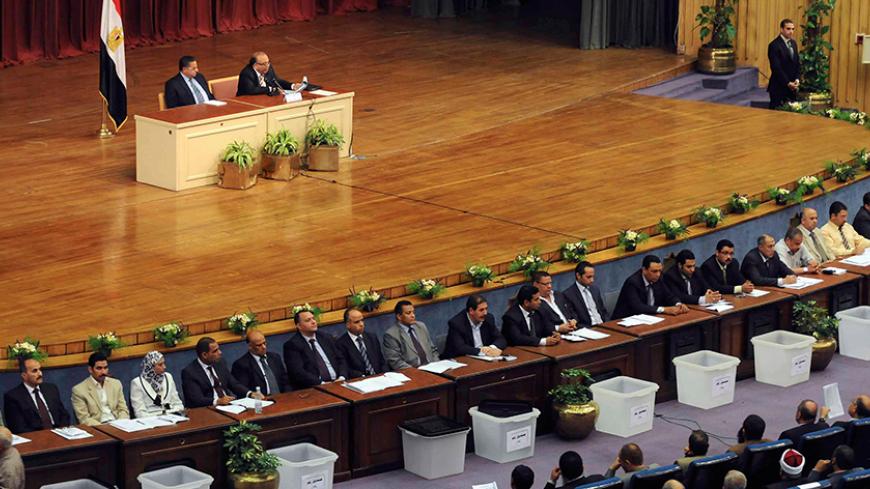 A general view of the two chambers of parliament meeting to elect the 100 members of the constituent assembly in Cairo, June 12, 2012. - REUTERS/Stringer

The current elections in Egypt are shedding light on segments of the population that are unable to compete for a large number of seats in parliament. A new electoral law is providing these groups with special representation in one-third of the parliament that is elected based on electoral lists. Among these categories are Coptic Christians, women, the disabled and youth.

Perhaps the term “marginalized groups” does not apply to women and Copts on economic and social levels, but it has been engrained for decades in the political arena. Despite that view, there had been no political moves to improve their integration into the Egyptian parliament except through a percentage set by the president in the quota system.

The 2015 parliamentary election law dedicated 24 seats for Copts and 56 seats for women. However, the real test is what was achieved outside the framework of these seats.

The successes can be explained by the fact that many of the Copts — like Wissa Wassef and Makram Ebeid, who were famous Christian politicians under the Kingdom of Egypt — belonged to the Wafd Party, which was the most popular among Egyptians and won the majority in most elections in which it participated from 1924 to 1952.

The Copts' party affiliation could also explain their declining representation in the two elections the Wafd Party boycotted: in 1931, when Copts got four seats out of 150 (2.67%), and 1945, when they got 12 seats of 264 (4.55%). Party affiliation also explains the elections in which the results were forged and manipulated by the king, the government of Mohamed Mahmoud Pasha and competing parties to keep the Wafd Party from winning the majority. One example of such election-rigging, according to a 1940 study by historians Ibrahim White and Tawfik Habib, is the race of 1938, when Copts got only six out of 264 seats (2.27%).

Bahaa al-Maghawiri, a political science teacher at Cairo University, agrees that those factors are probably behind the weak representation of Copts. He told Al-Monitor, “Perhaps minorities and marginalized groups need a strong party to support them.”

Maybe the political administrations during the days of Nasser, Sadat and former President Hosni Mubarak did not care about integrating Copts in the electoral process and that is why they were only appointed to 10 parliamentary seats that the president specified. There were no elected Coptic members of parliament in 1957 (the first parliamentary elections in Nasser’s days), in 1976 (the second parliamentary elections in Sadat’s days) and in 1995 (the fourth elections in Mubarak’s days). The highest representation they achieved under the eras of those three presidents was 1.34%, in the 1987 parliament.

The political administration’s disregard toward the Copts’ accession to parliament applies, to some degree, to women. However, the administration did try to improve women’s chances in some elections. In 1979, the first parliament stipulated the quota system for women and made it possible for them to have at least 30 seats. In 1984, the parliament was elected through the proportionality list.

In 1987, the Supreme Constitutional Court announced it was eliminating a quota for women, dismissing it as sexist. Nevertheless, the election of the majority of parliament members through the proportional electoral system supported women’s presence in parliament and they occupied 14 seats in the 1987 election without the quota.

With the elimination of the lists system in 1990, women suffered marginalization once again, only to re-emerge strongly in the 2010 parliament thanks to the quota, which reached 64 seats. But their representation declined again in the 2012 parliament. The highest representation for women in the Egyptian parliament without the use of quotas and electoral lists was 2.29% in both 1964 and 1971 and 2% in 2012, but two-thirds of this parliament was elected by electoral list.

Political experts and observers see the 2015 elections as a golden opportunity for women and Copts, with the absence of the Muslim Brotherhood movement and the Sunni Islamist's Gamaa Islamiya, and with the weakness of the Nour Party and the remaining Islamist currents.

The weak competition of the two categories for independent seats until 2015 must be explained, especially in terms of Copts who registered a high score in the parliamentary elections from 1924 to 1950. Maghawiri said, “The political Islam currents, mainly the Muslim Brotherhood, managed since the late 1940s to gain wide popularity after participating in the 1948 war against Israel. Their popularity surged when they claimed that they were persecuted by the authorities who succeeded them when [Egyptian Prime Minister] Mahmoud Fahmi an-Nukrashi disbanded the Brotherhood in 1948 and when Abdel Nasser arrested their leaders in 1954. This allowed their popular thought to take root, including their ideas that reject women’s and Copts’ participation in political action. The Brotherhood only allowed women and Copts to participate in their lists in the 2012 elections out of fear of being accused of sectarianism or misogyny.”

Based on the above, it seems women and Copts are unlikely to get high representation without quotas in the second round of the current parliamentary elections. But women's and Copts' accession to the parliament through the quota system could help them make political gains that would push citizens to support them in the next parliament, without quotas.