In an interview with Al-Monitor, Free Egyptians Party's acting President Essam Khalil discusses the party’s plan following its victory in the first and second stages of the parliamentary elections. 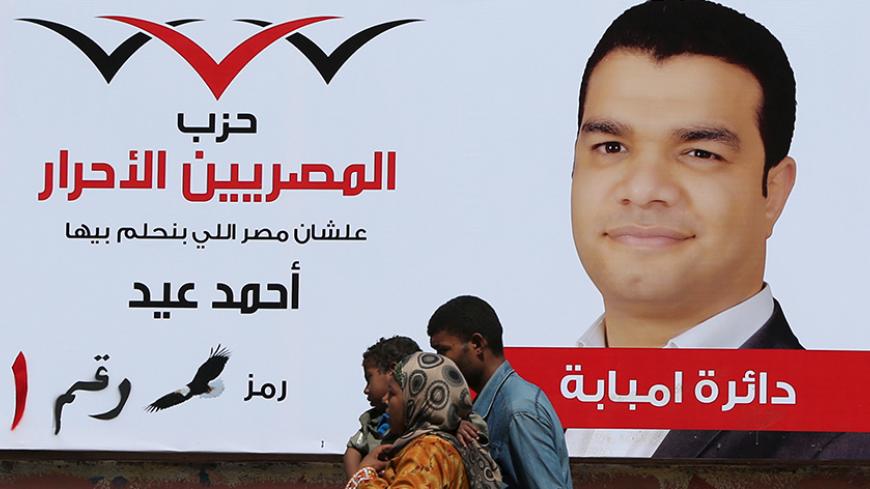 People walk in front of an election poster for a parliamentary candidate of the Free Egyptians Party in the Warak district of Giza, Egypt, Oct. 13, 2015. - REUTERS/Mohamed Abd El Ghany

CAIRO — The Free Egyptians Party (FEP), a liberal party established in the wake of the January 25 Revolution by Egyptian businessman Naguib Sawiris, came in first place in the first stage of the parliamentary elections, held Oct. 17-28, after securing 41 seats. According to preliminary results from the second stage that took place between Nov. 21 and Dec. 2, the party also dominated this round, reportedly securing an additional 65 seats. Al-Monitor spoke with the FEP’s acting President Essam Khalil, who revealed the party’s agenda in the parliament, and discussed legislative priorities and the party’s stance toward calls for the amendment of the current constitution.

Khalil repudiated claims that the party is trying to take over the parliament in order to control the country, denying that the party resorted to the sectarian vote to win.

Al-Monitor:  How was the FEP able to secure a victory in the first round of parliamentary elections?

Khalil:  The FEP’s secret of success for winning the first round is that we have been preparing for the elections for over a year now. We have carefully selected the candidates who would represent the FEP in the elections. To this end, we collaborated with the Egyptian Center for Public Opinion Research (Baseera) to conduct a poll in all constituencies and find the most popular candidates who also met the party’s standards of popularity, good reputation and hard work in each constituency.

Al-Monitor:  Last year saw many crises and a series of resignations, notably including the FEP’s former President Ahmad Said (Sept. 19, 2014), after which Osama al-Ghazali Harb was appointed in his place. Did that affect the party’s plan in the elections?

Khalil:  Well a crisis is usually a problem that leads to failure. However, the party emerged victorious in the first round of elections, which means it was not affected and we shall forge ahead to achieve our goals.

Al-Monitor:  In the 2012 parliamentary elections, the party came in fourth following a coalition with the Egyptian Bloc, while the Freedom and Justice Party — the political arm of the Muslim Brotherhood — came in first place. Has the absence of political Islam made room for the FEP to gain advantage?

Khalil:  The absence of political Islam from the elections was irrelevant to our success. Back in the 2012 elections, the party had been newly formed and was only three months old, which explains these results. But with time, we have gained much experience in politics and the party succeeded in reinforcing its presence in Egypt.

Al-Monitor:  Some claim that the FEP did not succeed thanks to its cadres and accuse the party of bribing non-members to stand as candidates after persuading them to run for the elections under the FEP banner.

Khalil:  There’s no such thing as bribing a candidate. This discourse serves no other goal than fighting our success in the elections. Many candidates refused to join the party and opted for running in the elections independently. We used to suggest that the candidates join two years prior to the elections so that they engage in party activities and get the opportunity to learn about the principles. The majority of candidates currently assume senior and executive positions in the party. As for relying completely on party cadres in the elections, the process takes years.

Al-Monitor:  How do you respond to allegations suggesting that the party is using the sectarian vote by relying on the votes of the Copts, especially after the emergence of a voice recording leaked in late October 2015 attributed to Bishop Boula, bishop of Tanta, calling on the people to vote for the FEP?

Khalil:  We did not totally rely on the sectarian vote, as our Muslim candidate faced an independent Coptic candidate in a run-off in one of the constituencies, and the result was in our favor. However, we refuse to categorize our candidates according to religion because we believe in citizenship. We also avoid categorizing voters in the same manner. A successful candidate is one who can garner the majority of votes in his or her respective constituency regardless of religious views.

As for Bishop Boula’s leaked voice recording and his call for voting for the FEP, further details concerning the context of the leak are needed to understand the reasons behind this call. In fact, the Coptic Church never interferes in the election process, let alone that it is very hard to influence Egyptian voters in the aftermath of the January 25 Revolution. Furthermore, the party’s popularity stems from its belief in separating religion from politics. Therefore, how can we abandon the main reason behind our popularity?

Al-Monitor:  What would be on top of your legislative agenda should the party win the majority in the second stage?

Khalil:  The party’s priorities in the parliament consist of approving the laws that were enacted during President Abdel Fattah al-Sisi and Counselor Adly Mansour’s terms following the June 30 Revolution. This will be to prevent further disruption in the country. We will also propose laws related to administrative structuring within the government as well as laws on investment and anti-corruption laws.

Al-Monitor:  What is your response to the accusations against the party, claiming the founder and funder, the famous businessman Naguib Sawiris, wants to control the parliament in order to be able to control the state and impose his agenda on the Egyptian government?

Khalil:  Mr. Sawiris is a patriotic businessman who supports the party financially and ideologically. He is not looking to control the parliament to control the state as some would like to suggest. He is an internationally renowned businessman who enjoys great economic clout in the world. He established the party because he felt the urgency to help the country stand on its feet again and protect the national economy to serve Egyptians and eradicate poverty.

Al-Monitor:  Will the party call for a government change?

Khalil:  We have not reached a final decision regarding the current government. But we will give it the chance to present its program in the parliament, and accordingly, the party will decide whether to give it trust or not.

Al-Monitor:  Is the party planning on forming a new Cabinet if it wins the majority?

Khalil:  The constitution dictates that we cannot form a Cabinet alone. But we would like to participate in any future government so that we could implement the party’s principles and national agenda.

Al-Monitor:  What is your position concerning calls to amend the present constitution?

Khalil:  I’m surprised by these calls, because the constitution has yet to fully come into effect. How can we demand an amendment in this case? But should there be any articles that require amendment, then we don’t mind as long as the goal serves the greater good of the country.

Al-Monitor:  Does the party plan on allying with any political power in the parliament?

Khalil:  The picture will be much clearer after the elections, but I think the future parliament will not see full coalitions, as existing ones are based on common political interests. In other words, if the FEP concurred with another party on a specific law, then there will certainly be room for alliance and coordination about it.

Khalil:  We participated in For the Love of Egypt list because it sought to represent marginalized groups such as women, Copts and the youth. However, the list does not have a clear agenda and it is only a coalition between parties and public figures. Therefore, it is hard to determine our stance toward [remaining in the list] now.

Al-Monitor:  What is the fate of the For the Love of Egypt list, which won the first stage of the elections?

Khalil:  According to the constitution, member parties should form an independent parliamentary committee, but nothing is clear yet.