Egypt’s parliamentary elections are tainted by allegations that voters were paid to cast ballots for certain candidates. 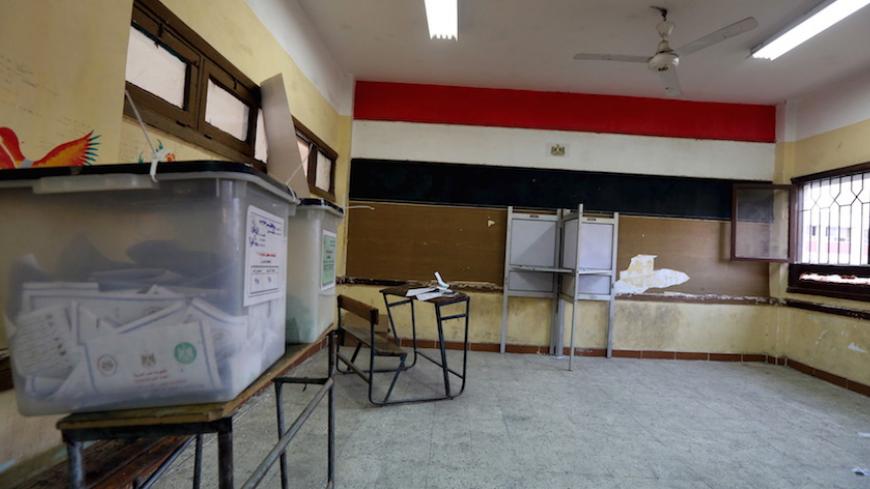 An empty polling station is seen during the second round of parliamentary election at Shubra area in Cairo, Nov. 23, 2015. - REUTERS/Mohamed Abd El Ghany

CAIRO — The Egyptian parliamentary elections, held in two phases during the months of October, November and December, were marred by numerous accusations of bribery.

The Parliamentary Elections Observatory, affiliated with the Maat Foundation for Peace Development and Human Rights, documented bribes made to voters to cast ballots for particular candidates.

A report issued by the foundation Nov. 24 during the second phase of the parliamentary elections stated, “The electoral process was marred by financial and in-kind bribes paid to voters to cast their votes [for a particular candidate]; a phenomenon that was observed in the majority of districts to varying degrees.”

Maat released video footage showing voters lining up and taking cash to vote for a candidate in Bulaq district in Cairo.

The website of the Wafd Party also reported Nov. 22 on electoral bribes offered by one of the candidates in Hadaiq al-Qubbah district. The portal said, “The electoral vote price reached up to 150 EGP [Egyptian pounds],” around $19.

Ayman Akil, the director of the Maat Foundation, told Al-Monitor, “We reported dozens of cases of bribery during the two electoral phases and we filed about 200 reports to the High Elections Committee.”

Medhat al-Sherif, a member of parliament for Masr Al Jadidah and al-Nuzha, told Al-Monitor, “While bribes may be the reason behind the victory of some candidates, they are few in number. Some districts disqualified candidates who paid bribes and made exaggerations in their electoral campaigns.”

“As the number of voters decreases, bribes become more influential. When I was running in the elections, there were brokers offering to pay money to voters to cast their ballot in favor of specific candidates, both partisans and independents,” he said.

Akram Elfi, a political researcher in parliamentary affairs who closely followed up on the election, told Al-Monitor that in his view bribes had no significant influence during the parliamentary elections, arguing that other factors determined the results. He sid that “the lower the number of seats contested by candidates, the less the influence of electoral bribery.”

Elfi said, “In Upper Egypt, electoral bribery had a very weak impact since tribal society rejects bribery as a shameful act.” According to his estimate, some “6% of MPs made it to parliament by direct electoral bribery. Parties, however, did not resort to bribery, even if some candidates of some parties individually resorted to this maneuver.”

The Free Egyptians Party (FEP), which was founded by Egyptian businessman Naguib Sawiris, won more parliamentary seats than any other party, finishing with 65.

Essam Khalil, FEP’s acting chairman, attributed the party’s success to the fact that it is “institutionalized and fights the electoral battle by using scientific methods.”

During a phone call made to "Hona Al-Asimah" ("This is the Capital") program airing on CBC satellite channel Nov. 22, the head of the Wafd Party's operations room, Mamdouh Riyad, accused the FEP of paying electoral bribes during the second electoral phase.

Shehab Wajih, a spokesman for the FEP, told Al-Monitor, “We have heard accusations of bribery, but we did not get involved in this matter. There is no single piece of evidence that proves that one of the party's candidates paid an electoral bribe. On the contrary, the party was combating this problem during the two electoral phases.”

He added, “During our monitoring of the elections, we found that other candidates had paid electoral bribes, but most of those who used this maneuver did not make it to the parliament.”

In statements made to EgyNews in early December, Judge Omar Marwan, a spokesman for the High Elections Committee, said, “We referred a number of facts relating to cases of electoral bribery to the public prosecutor to take the appropriate legal measures.”

Marwan did not announce the total number of cases of bribery during the two electoral phases and did not respond to Al-Monitor’s request for comment about the matter.

On whether electoral bribery represented a threat for the new parliament and could lead to the disqualification of some members of parliament, Elfi said, “There is no threat, simply because no one has evidence and it is difficult to legally prove electoral bribes. No bribing party, bribed party or intermediary will ever confess.”