An overview of Egypt's upcoming parliamentary runoff elections and results. 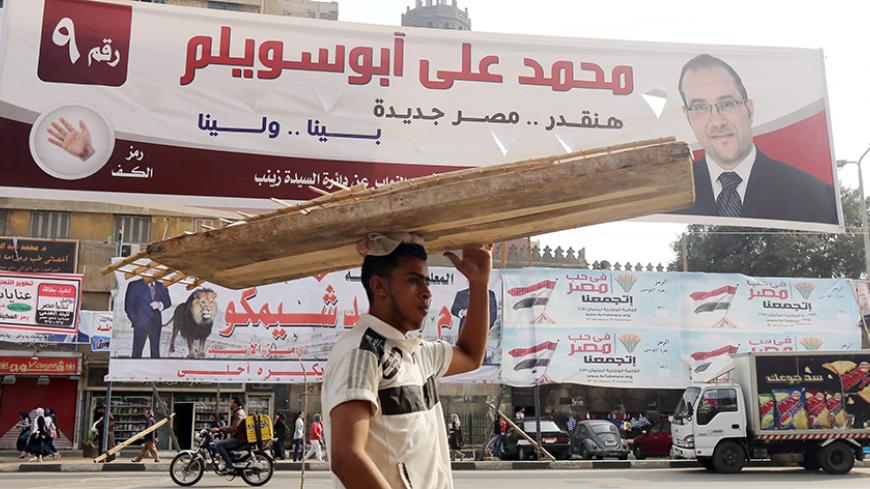 A street vendor walks under election campaign banners in downtown Cairo, ahead of the second round of parliamentary elections, Nov. 19, 2015. - REUTERS/Mohamed Abd El Ghany

CAIRO — Results of the second round of parliamentary elections held Nov. 22-23 painted the features of the Egyptian parliament’s political composition with the emergence of coalitions and alliances associated with the political regime. These coalitions and alliances are expected to back the regime inside Egypt’s parliament, particularly in the absence of a political party linked to, or representing, President Abdel Fattah al-Sisi in the legislature.

According to final results announced by the Supreme Electoral Commission on Nov. 25, 29.83% of eligible voters participated in second-round electoral districts. The governorates of the Sinai Peninsula, Kafr el-Sheikh and Dakahlia registered the highest rates, for reasons that observers linked to clan and family mobilization in favor of particular candidates in those districts. The Cairo governorate recorded the lowest percentage, despite the momentum engendered in the capital’s electoral districts by the candidacy of a number of public figures with media fame.

On the other hand, voting for the 222 individual seats saw victories achieved by only eight candidates in the second round of elections, most of whom are businessmen and media personalities, such as political analyst Samir Ghattas, businessman Talaat al-Suweidi and former Cabinet minister during Hosni Mubarak’s reign, Ali al-Mseilhi.

Thus, candidates from three political parties will have runoff elections to fill the remaining 214 seats: 55 candidates from the Free Egyptians Party, 50 from the Mostaqbal Watan Party (Future of a Nation), 43 from the Wafd Party and only eight candidates from the Salafist Nour Party. These candidates, who are contesting the runoff round from Nov. 30.-Dec. 2, included 100 candidates associated with the dissolved National Democratic Party in addition to 12 women and 14 Coptic Christians.

In that regard, parliamentary affairs researcher Yosri al-Azbawi told Al-Monitor, “Second-round results were heavily skewed in favor of parties, due to the fact that major political parties attempted to entice and attract the most influential candidates. The Free Egyptians Party, the Mostaqbal Watan Party and the Wafd Party will continue to dominate the political scene due [to] their parliamentary representative strength; while leftist parties suffered major setbacks due to various reasons — most importantly their lack of financial resources and inability to compete in a battle mainly ruled by political money.”

Al-Azbawi added, “Despite the influence of political money in deciding the outcome of a large number of seats, the process of buying votes was unsuccessful in many districts. Among them Nasr City east of Cairo, where a Coptic candidate won, despite competition from a number of businessmen there.”

The political money phenomenon saw a strong resurgence in the second round when compared to the first round of elections held from Oct. 17-28, with 1,000 Egyptian pounds ($127) paid per vote in some electoral districts, as monitored by the Joint Local-International Election Observation Mission.

The Supreme Electoral Commission, however, contented itself with issuing a decision on the first day of voting Nov. 22, barring the taking of post-voting cellphone photos of ballots, which was the method used by candidate representatives to ascertain how people voted prior to paying them money.

The first-round results that were announced Oct. 30 pointed to a pre-runoff landslide victory by candidates and parties not known for opposing the regime. Since then, preparations began under the leadership of the For the Love of Egypt list, which won a majority in the four nationwide electoral districts, to form a majority coalition of 300 parliamentarians, as Maj. Gen. Sameh Seif al-Yaza, the General Rapporteur of the said list, announced in press statements Nov. 26.

Despite the fact that nine Mostaqbal Watan candidates won as part of the For the Love of Egypt list, the unexpected successes of this newest party to the political scene amplified the ambitions of its representatives in parliament. In that regard, the party’s spokesperson, Ahmed Hassan, told Al-Monitor, “We shall not take part in any parliamentary coalitions, but shall form our own coalition therein. The party’s success in winning the largest number of seats in the face of long-established political parties is proof of our party’s great ability to gain the confidence of voters. It is also largely due to the presence of a young popular base that mobilized to achieve the results seen.”

In this context, the Salafist Nour Party is the biggest loser in this electoral battle, having vacillated between participating or withdrawing from the elections after its leadership’s unexpected defeat. This is despite it being a key element of the prevailing political scene on June 30 and its support of the army in the overthrow of the Muslim Brotherhood’s regime.

Shaaban Abdel Alim, the party's assistant secretary-general, told Al-Monitor, “The party fell victim to a fierce disinformation campaign by official and private media outlets, in keeping with the agendas of state intelligence institutions and businessmen. Electoral bribery and voter reluctance to participate were additional reasons for the party’s electoral failures. Yet the party’s lackluster parliamentary representation does not equate to the end of our work on the political scene, and is not indicative of weakness. The results may have been disappointing, but we shall examine the underlying reasons and endeavor to strongly return to the political arena.”

The instability in north Sinai continues, particularly after the killing of two of the judges overseeing elections in a suicide attack that targeted their headquarters in el-Arish on Nov. 24. A number of judges had received anonymous threats, warning against their participation in the first round of elections. In light of this, the Supreme Electoral Commission reaffirmed the holding of runoff elections in four of the governorate’s districts.

The electoral race will rage on until the second-round runoff elections ends on Dec. 2, to be followed by the swearing in of a new parliament, which is expected to be less vocal against, and more acquiescent to, the government and political regime, with the political scene dominated by symbols and parties loyal to the president.