Egyptians prepare for elections ... but do they really matter?

Egypt's parliamentary elections start Oct. 19, with a focus on individual candidacies as opposed to those sponsored by political parties. 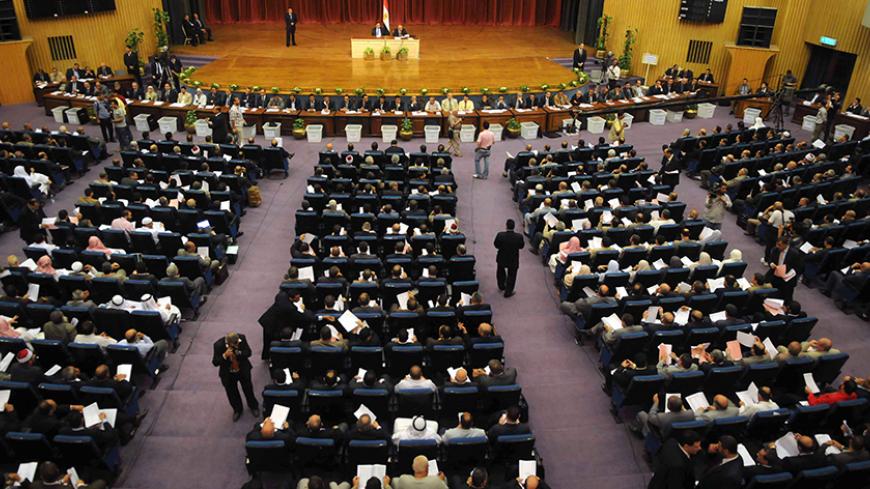 A general view of a meeting with the two chambers of Egyptian parliament, Cairo, June 12, 2012. - REUTERS/Stringer

CAIRO — Egypt’s 2015 parliamentary makeup is taking shape as elections officially get underway to form a long-awaited Council of Representatives. This achievement, seen as the electoral culmination of a road map announced July 3, 2013, is taking place in the absence of most of the post-January 2011 revolution political and partisan figures, who gradually disappeared from the political arena during the past two years.

In that context, the electoral scene is dominated by some pro-regime symbols and affluent supporters of the Hosni Mubarak regime, known as "feloul" ("remnants"), after the January 25 Revolution. There are some political parties timidly participating through the nomination of a few candidates, in keeping with the Egyptian Elections Law that limited opportunities for political party candidates to reach parliament, as opposed to individual candidates.

Despite political bickering between the regime and the multitude of political parties and movements that reject the elections law, and the cancellation of elections in March after a decision to that effect by the Supreme Constitutional Court — which found those laws in breach of constitutional provisions — President Abdel Fattah al-Sisi again approved the law in July after the Cabinet made minor amendments to the provisions dealing with individual candidacies. Still, this failed to satisfy political movements that rejected the draft bill from its inception.

Furthermore, in its decision No. 65 in August, the Supreme Electoral Commission called on eligible citizens to exercise their political right to cast their ballots in the upcoming parliamentary elections, organized pursuant to the 2014 Law on the Exercise of Political Rights, the amended 2014 Council of Representatives Law and the amended 2014 Electoral District Law, in two stages. The first stage would be held in 14 governorates Oct. 18-19, and the second in 13 governorates Nov. 22-23.

Parliamentary elections are to be held in 205 districts, pursuant to the amended Electoral District Law, and voters will choose their individual representatives out of a total number of 5,936 candidates. In addition, four districts have been formed where candidates from electoral lists will be elected to represent Greater Cairo, Upper Egypt, the West Delta and East Delta. There will be 448 candidates elected on an individual basis and 120 elected from lists. Sisi also will be able to appoint up to 28 members of parliament.

Noteworthy after the final list of candidates was announced is the fact that no political or partisan faction appeared to have an edge in the elections, as was the case following the January revolution in 2011, which led to the dominance of the Muslim Brotherhood. Also noteworthy is the emergence of a number of political figures affiliated with the Mubarak regime’s disbanded National Democratic Party, who are seen as heavy favorites in the same electoral districts that the party represented in the 2005 and 2010 parliaments.

The number of candidates known for their close affiliation with the Mubarak regime is estimated at 200 — they form part of what is called the return of the disbanded National Democratic Party’s representatives — with signs indicating their chances for success are rising due to their coordinative abilities and the services they provide in their respective districts. Most prominent among those figures is Shahinaz el-Naggar, the wife of renowned businessman Ahmad Ezz, who held the post of organization secretary in the National Democratic Party and who was a close associate of the former president’s son, Gamal Mubarak. Other figures include Haidar Baghdadi, a former National Democratic Party member of parliament in 2005 and 2010; Ali al-Mseilhi, minister of social solidarity under Mubarak and a leadership figure in the party; and Hani Srour, a former member of parliament accused and acquitted in 2010 of providing defective blood bags to the Ministry of Health.

On the opposite side of the fence, some parties have submitted a number of nominees in a variety of districts, with about 250 candidates representing the New Wafd Party, 250 representing the Egyptian Patriotic Movement, 227 nominated by the Free Egyptians, 194 by the Nation's Future Party, over 200 by the Nour Party and about 100 by the Egyptain Social Democratic Party. The Justice Party nominated two candidates and the Constitution Party failed to nominate anyone.

The Free Egyptians Party, financed by prominent businessman Naguib Sawiris, topped other political parties in the quality of its publicity material and financial spending, with candidates almost completely relying on Sawiris’ money and economic clout to finance their electoral campaigns. In that regard, Mahmoud al-Alaily, a member of the party’s supreme leadership committee, stated to the press that “Sawiris’ achievements in the investment sector give us great credibility.”

Support and intervention by businessmen is not limited to Sawiris, as other personalities have also come to the forefront, such as Al-Sayed al-Badawi, who owns Al Hayat television network, as well as Akmal Kortam, who owns a number of print publications and newspapers and Mohamed Abu el-Ainain, the owner of the Sada Al Balad channels. All these media outlets have launched campaigns and television programs to promote their respective candidates in the upcoming elections.

In addition to the elections for individual candidates, parliamentary balloting also will be held for 120 seats through lists in four electoral districts. There will be 45 candidates elected from lists to represent northern, southern and central Upper Egypt, which collectively encompass 11 governorates, and 45 more from the Southern and Central Delta (Greater Cairo) made up of six governorates. There will be 15 candidates elected from lists seeking to represent the Western Delta's three governorates, and 15 more in the Eastern Delta's seven governorates.

The competing lists were formed through negotiations behind closed doors by businessmen, state officials, and some parties and figures that support the current political regime. Most prominent among the lists is the For the Love of Egypt list, formed by Sameh Seif Yazal, which pledges total allegiance to the current regime. Other competing lists are Egypt, the Nour Party, the Call of Egypt, the Egyptian Front Coalition and the Independence Movement.

The For the Love of Egypt coalition is the strongest among the groupings competing for list-based seats. It is led by political figures that are pro-Sisi, and encompasses seven political parties, such as the Egyptian Future Party of Mohamed Badran, nicknamed in political circles “the spoiled boy close to the president,” as well as the Wafd, Free Egyptians and My Homeland Egypt parties.

For the Love of Egypt is the only coalition with lists in all four electoral districts; its electoral list already has won by default in the Eastern Delta for a lack of competing lists after the High Elections Committee disqualified, for administrative reasons, the Egypt list.

The second strongest grouping is the Egypt list, which includes the Egyptian Front Coalition and the Independence Movement. It has fielded three lists for the Western Delta, northern and central Upper Egypt and Greater Cairo. The Salafist Nour Party is participating with two lists, in Greater Cairo and the Western Delta, where it is expected to win as a result of its large Salafist popular base.

As candidate lists — affiliated with financial affluence and supporters of the current political regime — compete over parliamentary seats, the electoral scene remains devoid of opposition political symbols or figures with legislative or oversight experience. This may herald the election of a parliament limited to providing services rather than exercising its true, constitutionally determined powers.

The constitution, approved in a 2014 referendum, contains 38 articles, from Article 101 to Article 138, that pertain to the exercise of legislative powers, and organizing the activities of parliament, starting with the adoption of state general policies, economic and social development plans, public budgets and oversight of the executive branch. Those articles further give parliament broad powers that supersede those of the president — such as placing restrictions on the president’s right to relieve the prime minister and other Cabinet members of their duties, or ordering a Cabinet reshuffling without the approval of a parliamentary majority. They further give parliament the right to level charges against the president if the latter is found to have breached constitutional provisions, as well as the right to withdraw confidence from the president and conduct early presidential elections.

These broad powers were highlighted by Sisi, who, on more than one occasion, stated that “the next parliament may pose a great threat to national security if its members are not carefully chosen.” Sisi went even further to criticize the constitution and its provisions that set out the powers of parliament and said, “Many of the constitution’s provisions were written in good faith, but, the country cannot be governed by good intentions, and the next parliament shall either be a hindrance or a blessing.”

In the absence of parliament, Sisi issued 263 laws in 420 days — most of which focus on economic, military and security affairs; the organization of the judiciary and criminal procedures; and the addition of new categories of military tribunals. On the other hand, there are laws that may be deemed unconstitutional, such as the Maximum Wage Law, as well as the issuance of the Suez Canal Certificates, and the Long Live Egypt Fund. For, under Article 156 of the constitution, all these laws are subject to review and approval by parliament during the latter’s first 15 days in session, and are considered to be retroactively null and void if they are not deliberated and discussed.

But political pundits played down the possibility that parliament, in its projected form and in view of the candidates’ agendas and affiliations, would be able to perform these ascribed tasks, while considering that said tasks would be limited to delivering public services and providing the regime with political cover, thus complementing the semblance of democratic rule, without any actual exercise of parliamentary oversight and legislating powers.

“Primary responsibility for this situation lies in the electoral laws that were passed by the state without effective participation by the parties, leading to parliament being emptied of its political substance. The candidates included on electoral lists have neither the political nor the legal ability to legislate. President Sisi will correct this problem by appointing 5% of members of parliament possessing such abilities, and entrust them with reviewing and resubmitting pieces of legislation that he had circulated.”

Hassan Nafehah, a professor of electoral sciences, told Al-Monitor, “The electoral scene may be boisterous, but there is no hope for the political factions that led the January 25 [2011] or June 30 [2013] revolutions to regain their status; the main competing forces now are those that predominantly lean toward Mubarak’s regime. Electoral lists do not reflect the real roles played by Egyptian political parties, which number around 100, as most of those lists have been imposed by security agencies.” Commenting on the state of individual candidates, Nafehah said, “Political money, partisanship, clan affiliation and personal interests prevail.”

Amid slogans raised by the state to fight terrorism and embark on huge national projects that receive wide popular support with the help of pro-regime media promotion, Egypt awaits the election of a domesticated opposition parliament that does not significantly derail the regime while placating international questions concerning the tardiness of this third milestone on the road map announced on July 3, 2013.