Egyptian President Abdel Fattah al-Sisi has called for unifying Egypt’s political parties under one banner to run for elections, but could this be a viable option amid Egypt’s current political instability? 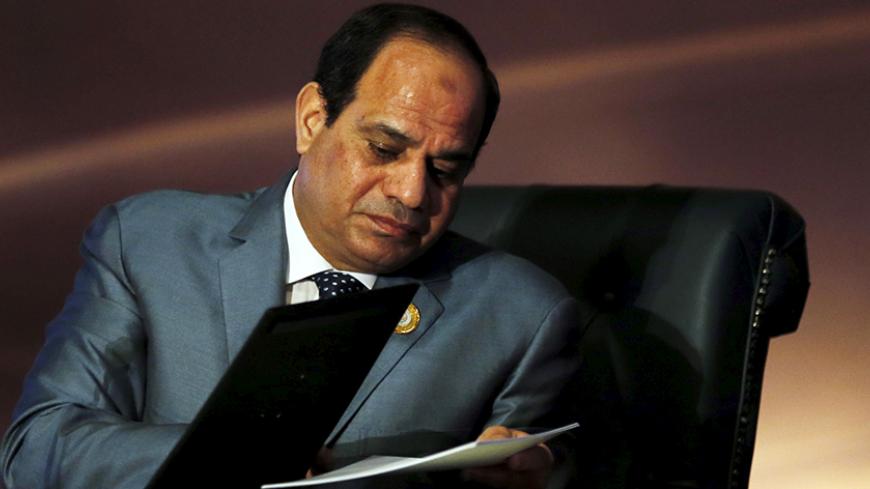 CAIRO — Egyptian President Abdel Fattah al-Sisi addressed his frayed relations with political parties May 27 by stating, during a meeting with them, that the presidential institution stands at an unbiased and equal distance from all political forces. The president proposed — and promised to support — a unified list of all political parties and forces that are to participate in the upcoming parliamentary elections, which the government is keen to hold this year.

Egyptian political parties have had strained ties with the presidency since April, because of the laws regulating elections, which were deemed unfit for a healthy political life. The laws also threatened the coming parliament with unconstitutionality, which could lead to its dissolution, as happened in 2012. Party leaders like Mohammed Anwar al-Sadat, president of the Reform and Development Misruna Party, expressed his opinion.

The For the Love of Egypt Alliance, which comprises several political parties and is reportedly supported by the state, drew the ire of many parties that were already against the government's controversial and unpopular law on the right to demonstrate.

Several parties submitted a memorandum to the Supreme Constitutional Court to demand expediting the case challenging the constitutionality of the protest law, including the Democratic Alliance parties (Communist Party, Dignity Party, Justice Party, Masr al-Hurreya and the Egyptian Popular Current); the Egyptian Social Democratic Party; and the Bread and Freedom Party. Some members of the Committee of 50, which prepared the constitution, signed the memorandum. The parties pointed out that the right to protest has been ratified by the constitution, but the protest law violated this, as it led to the incarceration of hundreds of young Egyptian men and women.

Hassan Nafiah, head of Cairo University's economic and political science department, told Al-Monitor, “The idea of grouping all political parties under a unified list is not realistic at all, as it is in direct conflict with the nature of the electoral process, which is based on competition. This proposal would kill the spirit of the electoral process, as voters will no longer have the choice to vote for many candidates and to choose the ones that represent them the most. Should all parties be included under one list, the election results would be a foregone conclusion.”

Nafiah noted that these districts are spread over wide areas and that they require money and effort that exceeds the capacities of the parties, which were drained by previous canceled elections. Practically, the parties coordinating with the state in the electoral process have better chances, since the state has several employees in the administrative corps. The latter can be mobilized in favor of certain candidates, as was the case in Hosni Mubarak’s days. Sisi is aware that challenges lay ahead. The People’s Assembly has acquired many privileges. For instance, parliament cannot be formed without its approval, nor can it be dismissed. The People’s Assembly can also withdraw confidence from the president and accuse him of treason.

“If we assumed that a unified list comprising all parties is possible, which [is a very difficult task], then it is very unlikely for the parties to coordinate with regard to the rest of the individual seats, numbering 448,” Nafiah said.

Nafiah said that Sisi’s call to unify the list aims to alleviate tension in political life and discredit those who claim that the state is backing one single list, which angered political forces. "Sisi’s call to unify the electoral list is further proof of his concern over the coming elections, as he has a military background and not a partisan one, which lessens his chances of being backed by a specific party," Nafiah said.

Although many political parties are trying to obtain Sisi's support, the president does not wish to be linked to any group, as this would suggest a direct loss for him on the political field. All these developments reflect the confusion plaguing Egyptian political life, leading to the postponement of elections that should have been held within six months of the ratification of the constitution on Jan. 9, 2014. "I believe they will be delayed more than once in the future, while Sisi stresses they will be held by the end of the year,” Nafiah added.

Wahid Abdul Magid, a political analyst at Al-Ahram Center for Political & Strategic Studies, told Al-Monitor, “The main goal of political parties is to compete, not to unite and become one entity, like railroad cars all heading in one direction. Each group has its own inclinations and agendas that differ from the objectives of other groups. The goal behind this competition is to serve and uphold society. Alliances between certain parties could be established according to political interests to defeat other political forces in the electoral process. However, unifying all parties under one list has never been done in any country before.”

Abdul Magid demanded that restrictions on the political situation be loosened and that new modern electoral rules be implemented to encourage competition. This would facilitate the growth of a healthy political environment that would help parties rotate power according to the voters’ will. Today, the entire political scene in Egypt is crippled because of restrictions on political and electoral competition.

Tahani al-Gebali, former vice president of the Supreme Constitutional Court of Egypt and current head of the Republican Alliance Party, told Al-Monitor, “The president’s call is a call for a national lineup and for keeping unity at a time when the Egyptian state is leading a war at the political, security and economic levels."

Gebali added that Sisi has realized, from a national perspective, that the members of the dissolved National Democratic Party are coordinating among themselves to return to parliament, while the political right wing, led by the Muslim Brotherhood, is mobilizing support to win seats in the next parliament.

Thus, Sisi called on all political parties, including individual candidates, to coordinate among themselves so as to protect the next parliament against the enemies of the national and civil state.

Gebali said that many of Egypt's 103 political parties do not represent anyone but their own members and are more of a burden on the state than an actual political movement. According to Gebali, political parties should also know that the Egyptian state is currently in a foundational phase, which requires the concerted efforts of all the concerned parties to move to the next democratic level, “which we all are aspiring to.”

It seems difficult for Egyptian political parties to unite under one list because there are three conflicting orientations vis-a-vis this possibility. One is represented by religious parties, another by parties supporting the old Mubarak regime and a third by parties seeking a modern democratic state. It does not seem like these orientations will converge soon.