While Egyptians voted this week for members of the newly created Senate, many experts say the elections will not bring about change in Egypt’s political sphere as most candidates have the approval of President Abdel Fattah al-Sisi. 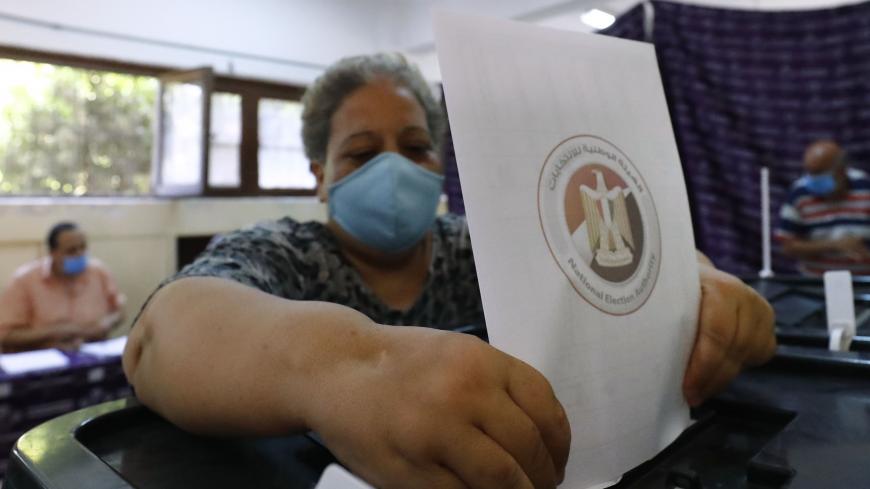 An Egyptian woman, mask-clad due to the COVID-19 coronavirus pandemic, casts her vote at a polling station on Aug. 11, 2020, for the new Senate. - KHALED DESOUKI/AFP via Getty Images

CAIRO — Egyptians went to the polls Aug. 11-12 to vote for members of the newly created Senate, the upper house of parliament that has only an advisory role, with restrictive measures in place to stem the resurgence of coronavirus cases.

Alaa Ashry, like many other Egyptians, was more preoccupied with his daily affairs than casting a ballot. “My vote will not change anything. There is no real competition between the candidates to elect an ineffective advisory council,” Ashry told Al-Monitor.

But Fatima Mohamed, a woman in her 60s, stood in front of a polling station in al-Sayeda Zainab district in downtown Cairo, where a DJ was playing national songs on loudspeakers and others raised candidate banners. “I insisted on voting so we can lead by example for the young people. It is our duty to support our country. There is no room for a faltering stance,” she told Al-Monitor.

Constitutional amendments approved in April 2019 strengthened the power of Egyptian President Abdel Fattah al-Sisi, allowing him to remain in power until 2030, and reinstated the second chamber of parliament, which had been abolished in 2014. The Senate is an advisory body without legislative powers.

Polling stations took precautions against COVID-19, and voters were requested to wear face masks; masks also were handed out. Egyptians abroad voted Aug. 9-10, via mail and online in 124 countries around the world. At home, Egyptians went to the ballot boxes Aug. 11 and 12. The vote is supposed to select 200 members (100 from a closed list that includes parties close to the regime and three opposition parties and 100 from individual lists), while the remaining 100 will be appointed by the president.

Amr Hashem Rabie, deputy head of Al-Ahram Center for Political and Strategic Studies, told Al-Monitor, “The Egyptian Senate will be an advisory body without real powers. The elections were held as per the closed list system, which stripped them of any sense of competition, with low voter turnout. Many voters considered that the election results are almost a foregone conclusion.”

A survey on the Senate elections by the National Center for Social and Criminological Research published Aug. 6 showed that 64% of those polled had not followed news of the Senate elections, and that 83% did not know how many members will represent their constituencies.

At the closing of the polls, initial data emerged on voter turnout; it was 7.5% in Dakahlia governorate, for instance. But then the National Election Authority warned the media not to publish any results or data related to the elections before the official announcement Aug. 19.

In a statement to the Middle East News Agency, Lashin Ibrahim, the head of the National Election Authority, threatened those who abstain from voting with a fine of 500 Egyptian pounds (about $31). However, such threats are rarely carried out.

In recent years, elections have not been of much interest for Egyptians, particularly young people. “This is the result of the amount of hypocrisy prevailing in the Egyptian political sphere,” Rabie said. The elderly and women have been mainly at the forefront in polling stations since Sisi came to power in 2014, as women in particular have sought a more active role in politics.

Farid Zahran, the head of the pro-opposition Egyptian Social Democratic Party, which participated in the elections, told Al-Monitor, “The low voter turnout in the Senate elections is because of two reasons. First, Egyptians were reluctant to vote as they believe the political elite have ruined political work and political parties.

“Second, people feel frustrated as the democratic forces failed to achieve their demands of change following the January 25 Revolution in 2011.”

Since he entered office in 2014, Sisi has tightened his grip on the country amid accusations from the opposition that he has been stifling political diversity, targeting partisan leaders and pro-opposition activists and blocking websites that attack the regime. The government denies such claims, saying those arrested have violated the law.

Thus, opposition parties, including the Civil Democratic Movement, the Free Egyptians Party and the Conservative Party, decided to boycott the Senate elections. Medhat Zahid, a leader in the Civil Democratic Movement, told Al-Monitor, “The Senate is a legislative addition without powers. It has no role in oversight or legislation. It is an additional burden on the state budget.”

“The regime wants to satisfy businessmen and figures loyal to it by making them Senate members, which would give them diplomatic immunity and prestige,” he added.

But Yasser Omar, a leader in the pro-government Nation's Future Party, told Al-Monitor, “The Senate elections in Egypt are not always popular and with low turnout. This time, however, a good number of voters showed up. The Senate will play an important role in drawing up public policies and helping parliament produce legislation that is up to the Egyptian people’s aspirations.”

He said his political party is not the president’s party but does support the Egyptian state. The Nation's Future Party “prepared a unified list of 11 parties, including pro-opposition ones such as the National Progressive Unionist Party, the Egyptian Social Democratic Party and the Reform and Development Misruna Party,” Omar said.

The Egyptian Social Democratic Party's participation in the elections under the same list with pro-government parties caused major disagreement within the ranks of the Civil Democratic Movement, which was established in 2017.

Egyptian Social Democratic Party head Farid Zahran recognized the deep differences in views within the movement. Yet he said, “Running in elections alongside pro-government parties would secure seats [in the Senate] to express our vision, in addition to other organizational, political and electoral gains.”

“We have received promises from these parties saying they will open up the public sphere [for political work], which is what we want and hope for,” Zahran added, adding, “We did not abandon the principles of the movement and demands to end this state of political siege and the release of political prisoners.”

Hassan Nafaa, a professor of political science at Cairo University, said the Senate elections were just for show, and were run by the Nation's Future Party working for the security services under a flawed electoral law that cannot produce forces representing different political groups and movements.

“If the regime wanted to hold real elections, it would not have held them in this exceptional time when the nation is facing the threat of the coronavirus. There will be a Senate, but it will be without any spirit or content, and will abide by what Sisi wants,” he said.