The Muslim Brotherhood is seeking political allies in time for parliamentary elections slated for November 2020. 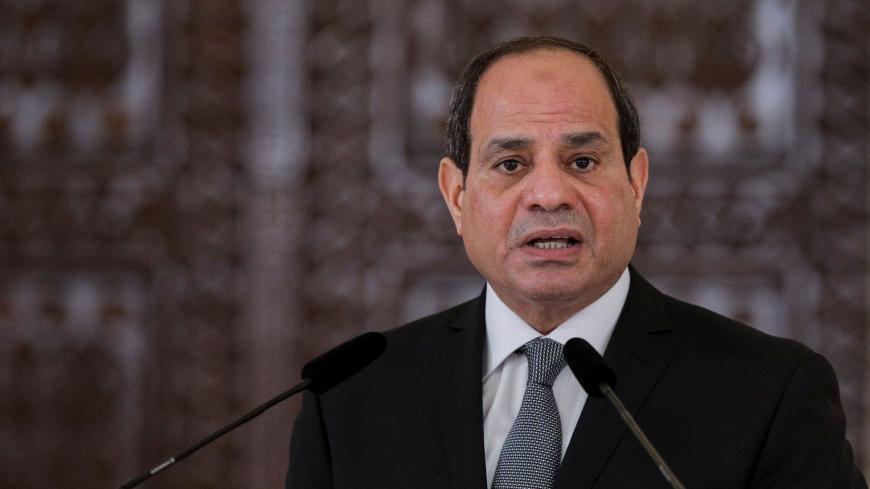 A correspondent in Egypt
December 2, 2019

CAIRO — Egyptian security forces arrested June 24 several politicians and activists in what they described as the so-called Hope Coalition, which they said is a conspiracy to use illicit Muslim Brotherhood funds to stir violence in the streets in a bid to topple the state.

Among those arrested were lawyer Ziad al-Elaimy, founding member of both the liberal Social Democratic Party and the January 25 Youth Revolutionary Coalition, young Nasserite leader Hossam Moaness and socialist journalist Hisham Fouad, all of whom were arrested on charges of belonging to a “terrorist group with a clear goal to destabilize Egypt.”

The political party leaders who took part in the “Hope Coalition” meetings dismissed these charges and explained that the name of the coalition was a temporary name for an alliance of seven pro-opposition political parties, including those within the Civil Democratic Movement such as the Dostour Party, the Social Democratic Party, the Popular Socialist Alliance Party, parliament's opposition 25-30 bloc and others concerned with public affairs and politics. They were preparing to contest in the parliamentary elections scheduled to be held in 2020.

A senior Muslim Brotherhood source, who declined to be named because he was not authorized to speak to the press on this topic, told Al-Monitor through the secure communication platform Wire, “The Muslim Brotherhood is ready to coordinate with any political faction in Egypt in an attempt to confront the repressive regime that is trying to eliminate all aspects of democratic life.”

The source, who fled to Turkey at the end of 2013, said, “In recent weeks, there have been new channels of communication with some political leaders in Cairo to discuss the revival of the idea of forming a political alliance with the civil forces to run in the elections under one list.”

“Some political parties in Egypt see an alliance with the Muslim Brotherhood as a great loss, especially following the yearslong distortion of the group’s image and political project. We totally understand that. But if we were to face repression in Egypt, we have to put all the mistakes that happened under the Brotherhood’s rule behind us,” the source noted.

“We already admitted our mistakes. We said we will embark on a new chapter and announced our intention to come to power after the fall of Sisi’s regime. We also decided to dissolve the Brotherhood and be integrated into other political parties. This shows the group’s true intention to cooperate with all parties,” he added.

In June, the Muslim Brotherhood announced a new strategy to deal with the political life in Egypt, by not demanding power and coordinating with the leftist and liberal political forces in Egypt, and to engage in any political action by forging alliances and not doing so independently.

Egyptian parliament Speaker Ali Abdel Aal announced Nov. 23 that the elections are to be held in November 2020, after weeks of controversy over the election date during the parliament's current session.

Amr Hashem Rabie, deputy director of Al-Ahram Center for Political and Strategic Studies, said it was very unlikely for any political parties to join hands with the “terrorist” Muslim Brotherhood.

“The basis of any alliance or political rapprochement between any parties for the sake of elections is to have convergent points of view and similar ideologies to form a strong coalition that would be in favor of the political process in Egypt. There can’t be any coordination between civil and Islamic forces, especially since the latter is rejected by the broader Egyptian society,” he told Al-Monitor.

In December 2013, the Egyptian government declared the Muslim Brotherhood an outlawed terrorist group, banning all its activities and confiscating all its funds.

A senior source in one of Egypt’s civil parties said any coordination with the Muslim Brotherhood is out of the question, especially with the increasing anger toward the group.

The source, who refused to be named, told Al-Monitor, “We seek to form a strong political alliance that could serve an effective opposition bloc in parliament in the face of the current regime. Therefore we cannot join hands with a group that would make us lose popularity in the street.”

The source stressed that political action is open to all Islamic or civil organizations, provided that it is peaceful.

Muslim Brotherhood leader Murad Ghorab, who fled to Turkey in 2014, said that the Brotherhood is working to be back on the Egyptian political arena.

Ghorab told Al-Monitor via phone, “We are not only getting ready to toss our hats in the ring for the parliamentary elections but also the Senate and local elections. We will run independently in the local elections should we fail to reach an agreement with other political parties.”