Egyptian activists arrested as Cairo cracks down on critics

Egyptian authorities arrested activists and lawyers in predawn raids June 25, claiming the men were part of a Muslim Brotherhood conspiracy to stoke violence against the state. 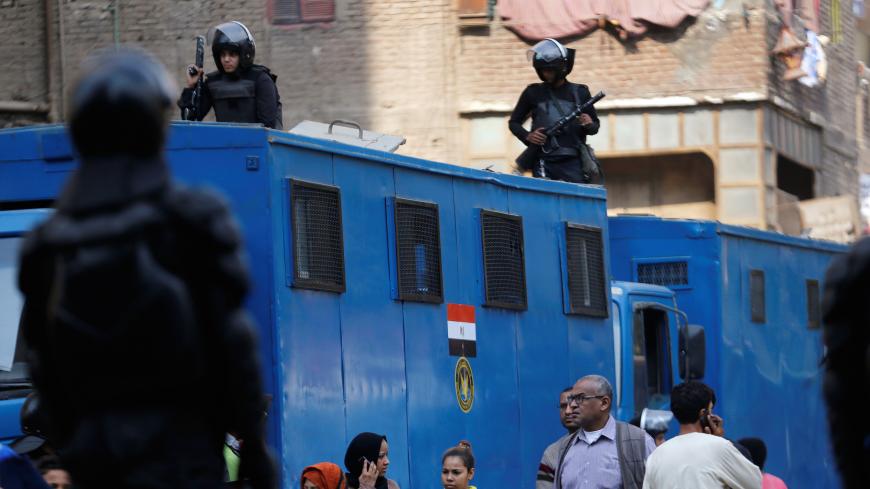 Lawyer Ziad al-Uleimi was walking to his car in the Cairo residential suburb of Maadi in the early hours of June 25 when he was abducted. Witnesses say the former member of parliament was taken by National Security officers. Uleimi resurfaced hours later at the State Security offices, where he had been detained pending an investigation.

Uleimi was a founding member of both the liberal Social Democratic Party and the January 25 Youth Revolutionary Coalition, which negotiated the way forward for Egypt with the Supreme Council of the Armed Forces during and after the 2011 uprising that ousted Hosni Mubarak. Now he faces charges of "helping a terrorist organization further its interests" and "spreading false news," according to independent newspaper Mada Masr. Prosecutors ordered on June 26 that Uleimi be detained for 15 days after he was questioned about his political affiliations and his plans to form a new coalition.

The Interior Ministry released a video online shortly after Uleimi's arrest, accusing him and seven other secular activists and government critics — arrested in predawn raids on their homes June 25 — of "entering into a conspiracy alongside exiled Brotherhood leaders aimed at toppling the state and its institutions." The video, widely circulated on social media, shows security forces raiding company offices and confiscating computers and cash.

The video claimed that illicit financial inflows, allegedly transferred by exiled Brotherhood leaders, amounted to 250 million Egyptian pounds (around $15 million). The funds would have "financed activities against the state" to coincide with the anniversary of the June 30 protests, according to the Interior Ministry.

June 30 marks the sixth anniversary of the military-backed protests that overthrew President Mohammed Morsi, who hailed from the Muslim Brotherhood.

Two journalists, Hisham Fouad and Hossam Moa'ans, are among those detained in the latest "wave of arbitrary arrests" targeting government opponents, according to Amnesty International. Magdalena Mughrabi, Amnesty International’s North Africa director of research, described the arrests as "the Egyptian authorities' systematic persecution and brutal crackdown on anyone who dares criticize them."

Fouad is a member of Egypt's Revolutionary Socialist movement, who, through his journalism, helped mobilize "support for the workers' movement, including the independent unions which emerged in the late 2000s," according to the UK-based Socialist Workers Party, which is calling for his release. The state froze Fouad's assets in 2015 during a campaign to seize the assets of Muslim Brotherhood leaders and members following the group's designation as a terrorist organization in 2014. A court ruling reversed the decision to freeze Fouad's assets in October 2016, affirming there was no evidence of his affiliation with any terrorist group.

Moa'ans​, meanwhile, is a spokesman for the youth-dominated Popular Current party, created in September 2014 by socialist politician Hamdeen Sabbahi, the sole candidate to contest the 2014 presidential election that brought Abdel Fattah al-Sisi to power. Moa'ans​ also managed Sabbahi's 2014 election campaign, a move that, not surprisingly, earned him the wrath of the security services, who have thrown their weight behind Sisi.

Economist and professor Omar el-Shenety was also arrested June 25 and faces similar accusations of having links with a terrorist group. A private equity investor, Shenety's popular Alef bookstore chain was overtaken by the state in August 2017 "to ensure that the bookstore's shareholders are not members of the Brotherhood," according to an Alef staffer.

Aqabawy was not home when police raided his house; his 19-year-old daughter, Moawada, was arrested instead, a move that prompted him to hand himself in to security forces. His daughter has not been released and her whereabouts remain unknown. State security denied she was arrested, according to lawyer Ahmed Saad.

Media reported that an aide to Ahmed Tantawy, a member of the largely oppositional 25-30 parliamentary bloc, was arrested. Tantawy is a vocal critic of government policies, including the controversial constitutional amendments that recently passed in a referendum, paving the way for an extension of Sisi's rule by six years after his term ends in 2022. Soon after the arrests, the media reported that lawyer Ayman Mahfouz filed a complaint calling for Tantawy to be stripped of parliamentary immunity since "his aide had links with a terrorist organization."

The arrests shocked liberal circles, leaving many wondering why certain activists had been targeted. Rights advocates and sources close to the suspects rebutted the Interior Ministry's allegations that the men were involved in a so-called Hope Plot, which security officials described as a conspiracy to use illicit Muslim Brotherhood funds to topple the state through violence.

Publisher and pro-democracy activist Hisham Kassem dismissed the ministry's accusations as "baseless," explaining that the Hope Coalition was a temporary name for an alliance of seven political parties, including those within the Civil Democratic Movement such as al-Dostour, the Social Democratic Party, the Popular Socialist Alliance Party, parliament's opposition 25-30 bloc and others concerned with public affairs and politics.

Kassem said he was a member of the alliance and had attended several meetings at the headquarters of various political parties in downtown Cairo over the last few months. The alliance members, he said, were trying to agree on the wording of a statement that would have been released at the coalition's official launch.

"Our aim was to encourage citizens to participate in future elections," Kassem said. He denied that the alliance had any links to the Muslim Brotherhood or that its members intended to mount a political front, "even though that would have been perfectly legitimate."

He said, "It is simply an alliance to encourage greater political participation, given that the proposed coalition brings together a range of leftist, centrist and capitalist parties that would never see eye to eye on economic or other policies — a fact that made it difficult for the members to reach consensus on something as simple as a launch statement."

An opposition lawmaker, who chose not to be named, also lamented the recent arrests. The arrestees "have joined the long line of the oppressed because of their political work. We want a statement from the political leadership telling us whether political work is allowed in Egypt or not," he told Mada Masr.

The eight men arrested June 25 are being prosecuted in Case No. 930 of 2019, referred to in the Egyptian media as the "Hope Coalition Case." Several other previously arrested suspects are also being prosecuted in the case alongside the liberal activists arrested in recent days. They include Kassem Abdel Kafy, who is the lawyer of Muslim Brotherhood leader Khairat el-Shater, and Amr Nohan, a human rights lawyer who was arrested at a police station in Alexandria, where he had gone to provide legal assistance to a detainee.

Twelve Egyptian human rights organizations signed an online petition published by the Cairo Institute for Human Rights Studies calling for the immediate and unconditional release of the detainees.

The arrests are yet "another manifestation of the state's relentless efforts to eliminate all peaceful outlets for free expression and association, including legally and constitutionally sanctioned political participation allowing for the rotation of power through free and fair elections," reads the online statement.

"The Hope Coalition is a platform based on political compromise between reformists within the state, the business community and the demands of January 2011," human rights defender and institute Director Bahey el-Din Hassan told Al-Monitor. "By aborting the coalition, the authorities are seeking to eliminate the hope for a better, more inclusive future for the country."

He continued, "This is wishful thinking. Initiatives rooted in the same logic will inevitably emerge, albeit with new faces. This is not about a specific coalition. Rather, it's about the strategic window of hope for a new, democratic Egypt."