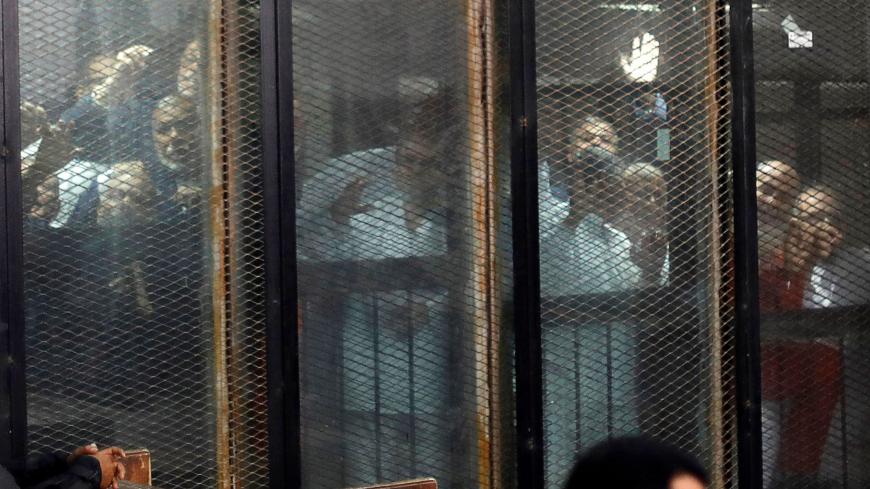 CAIRO — The Egyptian Interior Ministry announced that it had arrested several politicians and journalists suspected of planning to form a terrorist cell it named as Amal in cooperation with the Muslim Brotherhood, which is designated as a terror group by the Egyptian government. The Amal ("Hope") Alliance is a nascent coalition of liberal and leftist groups.

In a June 25 statement, the ministry explained the case also involves the owners of 19 Egyptian real estate, development and service companies affiliated with the Brotherhood and with a combined capital of 259 million Egyptian pounds (about $15 million), which it alleges is intended to finance demonstrations against the Egyptian government.

The defendants include Zyad al-Elemy, a former leader of the Egyptian Democratic Party and a 2012 member of parliament, and Hassan Barbari, the executive director of the Egyptian Labor Relations Forum, an international human rights organization.

The arrests included two politically active journalists, among others. Hossam Mo’nis is the former leader of the presidential campaign of the 2014 presidential candidate Hamdine Sabah and Hisham Fouad is a leader in the Revolutionary Socialists movement in Egypt.

The statement claimed that the defendants attempted “to establish illegal funding channels from abroad in cooperation with the Muslim Brotherhood and terrorists who sought refuge in some hostile countries where they could work on financing the protests against the state.” It added, “The defendants were also seeking to carry out acts of violence and riot against state institutions, especially through the news media and social media, as well as satellite channels broadcasting from abroad.”

Bahi al-Din Hassan, director of the Cairo Institute For Human Rights Studies, said that these accusations are baseless. Hassan tweeted June 25 that the defendants were seeking to establish a political coalition of leftist and liberal forces to rein in the upcoming parliamentary elections slated for 2020.

“[Egypt’s President] Abdel Fattah al-Sisi is trying to abort the Amal Alliance, which includes the Civil Democratic Movement, the 25-30 Alliance and the Conservative Party as well as several liberal and leftist public figures. The alliance was supposed to be announced within days at a press conference,” Hassan said.

The Civil Democratic Movement also denounced the arrests. Its June 26 statement read, “Politicians are being apprehended for their freedom of thought and are facing fabricated accusations for having the mere intention of running for elections, which is a new political crime. The Civil Democratic Movement has nothing to do with the Muslim Brotherhood and everything that has been said in this context is baseless.”

One of the human rights lawyers who attended the interrogations with the defendants but declined to be identified said the questions included the defendants' ties to the companies mentioned in the Interior Ministry statement. The lawyer told Al-Monitor that the defendants were asked their opinion of the revolutions of Jan. 25 and June 30 and their positions on the constitutional amendments allowing Sisi to remain in power, the Egyptian-Saudi Tiran and Sanafir Islands deal and Sisi's performance as president, all issues irrelevant to the charges.

Medhat al-Zahid, the head of the leftist Socialist Popular Alliance Party, told Al-Monitor that despite the Interior Ministry’s claims, the Amal Alliance “seeks to build a political coalition that includes a 25-30 parliamentary bloc, the parties of the Civil Democratic Movement and youth groups, in order to run in the parliamentary elections.”

Zahid, who was involved in the effort's planning meetings, added, “The new alliance was designed to become a guarantee for the people, the state and security and to open new doors for change against the policies harming the nation.”

A parliamentarian and member of the 25-30 Alliance told Al-Monitor on condition of anonymity that the Egyptian security apparatus got in touch with the founders of the alliance and asked them not to contact former interim vice president and founder of the Dustour Party Mohamed ElBaradei or to try to get him to join.

“The organizers, however, rejected these recommendations and began coordination with other politicians with the same views against the oppressive regime, and this is when the arrests started,” the lawmaker concluded.