National forces and leftist parties in Egypt established a new front aimed at raising popular awareness and pressure on the dispute with Ethiopia over its controversial dam on the Nile River. 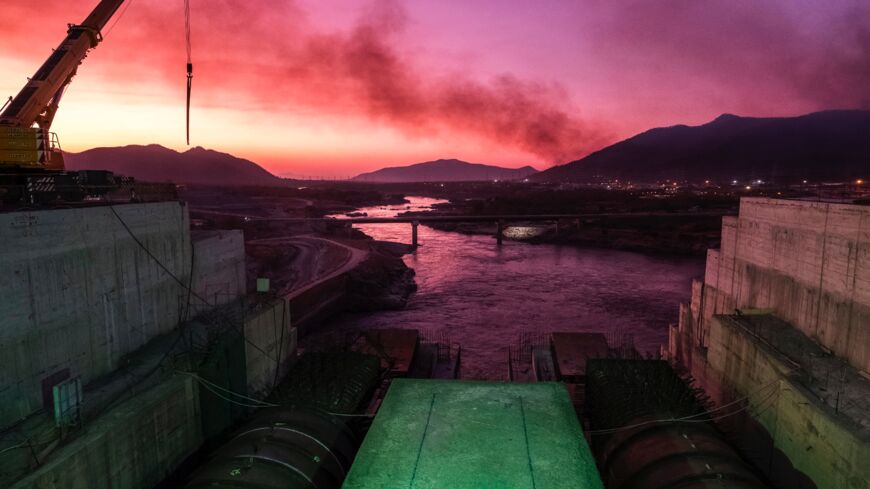 A general view of the Blue Nile river as it passes through the Grand Ethiopian Renaissance Dam (GERD), near Guba in Ethiopia, on Dec. 26, 2019. Ethiopia remains locked in talks over how the dam will affect downstream neighbors, principally Egypt. - EDUARDO SOTERAS/AFP via Getty Images

CAIRO — Egyptian national forces, figures and parties recently announced the inauguration of the Popular Front for the Preservation of the Nile River, a campaign that aims to push the people and the government to participate in defending the country's right to water and thwart the risks arising from the Grand Ethiopian Renaissance Dam (GERD), which is scheduled for a second filling in the upcoming rainy season in July and August.

In its opening statement on June 1, the Popular Front said the GERD crisis necessitates a general national mobilization to thwart the risks arising from the dam, adding, “The people are an authentic party and must be aware of everything that is going on. Instead of being a spectator of a fateful issue, [people must] rather be an active partner in supporting all efforts to advocate for national rights.”

The Popular Front called for exerting pressure on Ethiopia to sign a binding agreement on the filling and operation of the dam, as well as an agreement not to establish any future projects without the approval of the downstream countries, namely Egypt and Sudan. The Popular Front also stressed the criminalization of selling or delivering water outside the borders of the Nile countries, specifically to Israel.

The formation of the Popular Front for the Preservation of the Nile River comes amid the stalled GERD negotiations in light of Ethiopia’s insistence on moving forward with the second filling without an agreement with the two downstream countries, and its rejection of all technical proposals on the rules of filling and operating the dam that Cairo presented during previous negotiation rounds or those proposed by international mediators. Meanwhile, Egypt has stepped up diplomatic efforts to persuade Ethiopia to sign a binding agreement vowing not to harm Cairo's share of Nile River water.

Medhat al-Zahid, head of the Socialist Popular Alliance Party that joined the campaign, told Al-Monitor about the legal path the campaign will take by communicating with Egyptian communities abroad to urge them to file lawsuits against the companies that are taking part in the construction of the GERD. The Popular Front, Zahid continued, will also call on Egyptians abroad to demand foreign parliaments pressure their governments to condemn the actions of the Ethiopian government and its extreme intransigence against Egypt’s interests in the Nile waters, or to stop aid to the Ethiopian government altogether.

Zahid said the Popular Front will work to direct Ethiopian and African public opinion and clarify that Egypt is a country that supports peace and does not stand against the progress of Ethiopia and its people, but on the condition that Egypt's interests and historical rights in the Nile waters are taken into account.

The campaign also includes a group of writers and journalists opposing the Egyptian state, which sparked controversy, as the pro-regime media considered the formation of the Popular Front to be contrary to the government’s official path.

In this context, Nashat al-Daihi, a presenter at TeN TV, criticized the Popular Front, saying the pressure attempts exerted by it are futile and popular pressure on the GERD issue is no longer viable. Daihi said on his show that Egypt needs popular solidarity instead of searching for false heroism and intellectual differences.

For his part, Zahid said the Popular Front’s role is complementary to that of the state, as civil society and parties — in addition to being part of the state — can play certain roles the state cannot, stressing the civil society discourse addressing Ethiopian parties and the public may have more impact in some areas.

The Popular Front supports the state in every direction that protects Egypt's interests in the Nile waters, but it also “has no problem in pressuring decision-makers to take decisions that protect our interests,” he noted.

Zahid admitted that forming the Popular Front was long overdue, but the civil parties reconciled this situation and addressed letters in all languages to the leftist parties in Ethiopia and the world, warning against Ethiopian policies in the region.

Egypt had signed the Declaration of Principles with Ethiopia and Sudan in March 2015. The agreement constituted an official Egyptian recognition of the construction of the GERD, provided the three countries adhere to the principles of cooperation based on mutual understanding, realizing the water needs of each party and not causing harm to anyone.

However, the three countries encountered disputes, the latest of which was the Ethiopian insistence on the second filling of the dam. Meanwhile, the last round of negotiations held in April between Egypt, Ethiopia and Sudan in the Congolese capital, Kinshasa, failed to reach an agreement on the mechanism for filling and operating the dam.

Consequently, Egypt referred the GERD file to the UN Security Council and demanded it intervene. Cairo also concluded military agreements with Ethiopia’s neighboring countries in order to isolate it.

Former parliament member and member of the Popular Front Haitham al-Hariri told Al-Monitor the campaign aims to support but simultaneously pressure decision-makers in Egypt because the situation is dire. He said Egypt has wasted 10 years in useless negotiations with Ethiopia and signed an agreement that does not protect its rights. He believes the serious steps that Egypt has taken recently are too late.

He noted that the Egyptian government’s recent efforts, such as resorting to the Security Council and surrounding Ethiopia from all sides, should have been pursued over the past years. However, the current situation requires the Popular Front to address the GERD using a different approach because it is a sensitive issue, he said.

Hariri further stressed that the Popular Front is not looking to achieve political gains.

For his part, Tarek Fahmy, a professor of political science at Cairo University, told Al-Monitor the presence of the Popular Front for the Preservation of the Nile River is not politically or popularly important because the current stage requires direct official actions, not popular initiatives or diplomacy.

Fahmy said the Popular Front would not be able to achieve anything because the time for forming fronts is over. He said this front will thus not achieve any positive results, and putting it forward at this time disrupts the position of the Egyptian state.