Egypt's parliamentary election is over, but now the battle begins for control in shaping a new government. 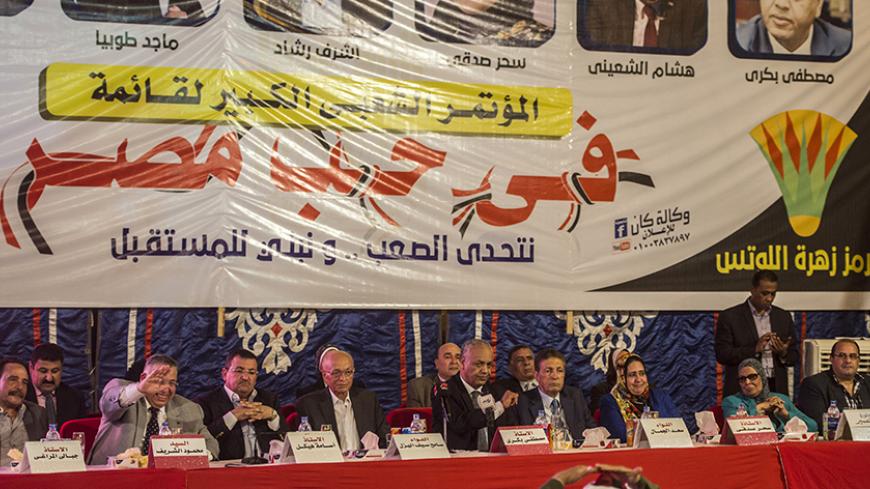 Candidates and other members of the For the Love of Egypt coalition wait before speaking during a campaign meeting ahead of the parliamentary elections in Qena, Sept. 29, 2015. - KHALED DESOUKI/AFP/Getty Images

It is difficult for any party or electoral coalition to control most of the parliamentary seats in Egypt, where there is a large number of competing parties. In the recent parliamentary election, 5,420 candidates, of which 75% (4,058) were independents, competed within the individual-seat system. This resulted in the victory of 316 independent deputies, representing 70.5% of the individual seats, and 55.6% of the total elected deputies.

Sameh Seif El-Yazal, a former military intelligence official and one of the most effective characters in the elections and the new parliament, had established the prominent but temporary For the Love of Egypt coalition. His goal was to combine the influence of the parties and independents, whatever their views, long enough to win the battle of closed lists and gain a third of the parliament. In addition to the independents, the alliance included the Free Egyptians Party, Nation's Future, Wafd, Conservatives, National Movement, My Homeland Egypt, Republican People’s Party, Al-Mutamar, Al-Tagammo, Al-Ghad and Modern Egypt.

The alliance won and the coalition members dispersed in the parliament. Then Yazal announced Dec. 1 that he was forming a new parliamentary coalition called State Support. The new group would allow him to bring together a majority capable of forming a government, in case the parliament rejects the cabinet that the president submits for approval. Yazal considers his new coalition a rival of those parties that used to belong to For the Love of Egypt, especially the Free Egyptians, funded by businessman Naguib Sawiris. Sawiris criticized the State Support coalition in a television interview.

On Dec. 10, newspaper Al-Youm Al-Sabaa published the State Support coalition’s founding document, which deputies wishing to join the coalition must sign. Deputies and legal experts criticized the document because it required signers to repudiate their partisan affiliations. Some experts considered that a form of “changing parties.” Article 110 of the Egyptian Constitution and Article 6 of the parliamentary law dictate that if a deputy changes parties or becomes an independent, then he may be ejected from parliament if two-thirds of deputies approve.

“Establishing alliances and coalitions [in itself] is not considered changing partisan affiliations," Mahmoud Kubaish, a law professor at Cairo University, told Al-Monitor. "But the problem in the State Support coalition’s founding document is its requirement to repudiate their partisan affiliations. This could mean that the deputy has left his party and become an independent. This conflicts with the basis on which he was elected.”

Indeed, one of the leaders of the State Support coalition, Osama Haikal, announced Dec. 17 that the document had been canceled and replaced by an executive document that avoids the problem of party affiliations altogether, and that this new document would be announced soon.

Haikal also said that the Nation's Future, Protectors of the Nation, Republican People’s Party, Al-Mutamar, Freedom Party and the Conservatives have decided to join the coalition, and that most independents have decided to join as well, bringing the total number of members to about 400. Meanwhile, the secretary-general of the Free Egyptians Party, Essam Khalil, said in a press statement Dec. 16 that his party has refused to join the coalition.

The coalition is expected to have an absolute majority, but any disturbance in the coalition could prevent a government from being formed and could even cause parliament to be dissolved, in accordance with Article 146.

A member of parliament who spoke with Al-Monitor on condition of anonymity said, “There was a conflict between Yazal and the Free Egyptians Party over attracting independents and forming a majority coalition in parliament. Yazal succeeded in winning the majority. … But the battle is not over at this point, and the Free Egyptians Party, with the support of Sawiris, are still trying to win over independents and some parties.

"Perhaps they will succeed when the State Support coalition starts forming the government, which could lead to unrest within the coalition, in turn leading to a failure to securing a majority of votes for this government, and the coalition could then dissolve.”

The coalition is unstable. Mohamed Badran, head of the Nation's Future Party, announced in a Dec. 20 speech that his party had left the coalition, though he didn't give any clear reasons. His decision was welcomed by the Free Egyptians Party. However, the Nation's Future Party officially announced two days later that it had returned to the coalition "after discussions eliminated all points of disagreement between both sides."

Yazal is still trying to convince Wafd to join the coalition, even though El-Sayyid el-Badawi, the head of Wafd, announced Dec. 20 that his party's final decision is not to join.

The second test the State Support coalition faces is how to deal with the government's economic decisions. Many pieces of legislation and decisions adopted by President Abdel Fattah al-Sisi, or those he intends to adopt, limit imports to the country in general, and limit the export of raw material. Business owners say those decisions hurt them. The president also drafted a fiscal and tax system that angered them. Business people represent about 20% of parliament (116 deputies), in addition to the deputies of parties they back or preside over: Free Egyptians Party, Nation's Future Party, Wafd, Republican People’s Party, Conservatives, Democratic Egyptian Party, and Reform and Development represent 187 members (32.9%). The business lobby has about 300 members and has a 53.8% majority to block legislation.

Among the most important pieces of legislation issued by Sisi, who was the legislative authority before the parliamentary election, is a law taxing stock gains. Also, the central bank has restricted deposits and transfers of US dollars to $10,000 per day and $50,000 a month, leading to the disruption of some import operations.

It is worth noting that Yazal announced Dec. 19 that the name of the State Support coalition was changed to Supporting Egypt; however, it is still known by its original name among many politicians and media outlets.