The founder of the Free Egyptians Party Naguib Sawiris took to Twitter to condemn what he believes to be the state's nationalization of his opposition party. 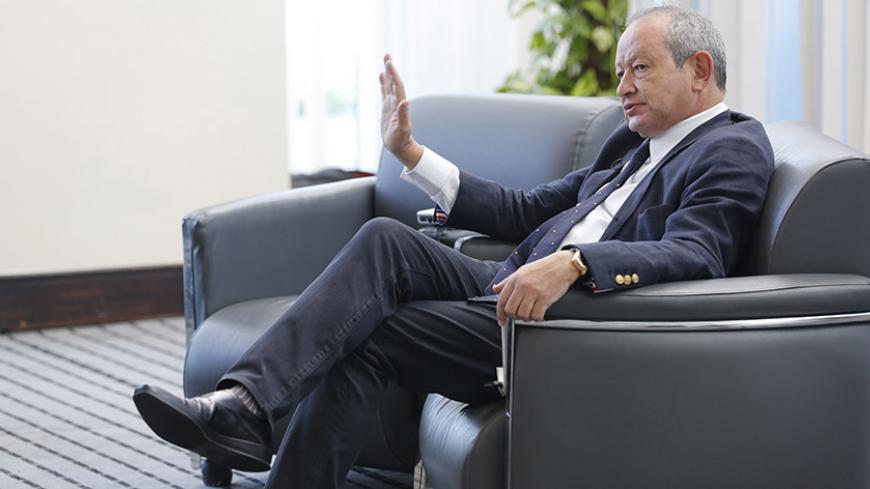 Naguib Sawiris, an Egyptian telecom tycoon and founder of the Free Egyptians Party, replied on Twitter on Dec. 31 to a comment by one of his followers wondering whether the state had nationalized the opposition party as if it were an economic enterprise. His response: "Well said!"

The exchange comes in the wake of the internal disputes that shook the party in recent days. With 65 members of parliament, the Free Egyptians Party is the largest party in the Egyptian parliament.

On Dec. 31, Essam Khalil, the president of the Free Egyptians Party, held a press conference announcing the approval by the party's General Conference members of amendments to the bylaws and the dissolution of the Board of Trustees, which is deemed the supreme authority of the party. This would overthrow Sawiris, one of the largest party sponsors and a prominent member of its Board of Trustees.

Sawiris saw this procedure and the state's nationalization of the party as illegal. On his Twitter account on Dec. 31, he wrote, "Do not be sad when time has betrayed you because dogs have always danced on the bodies of lions. Do not think their dance gives them power, for dogs stay dogs and lions stay lions."

In another tweet, Sawiris stated that he will resort to justice, saying, "Now we will have to resort to the courts … unless the judiciary also has been nationalized."

In a third tweet, he said, "Everyone knows that I withdrew quietly since I felt a general disapproval. I am baffled and suspicious as to why the battle is being waged inside the party and about its timing and purpose."

The conflict within the ranks of the Free Egyptians Party made its way to the courts. Lawyer Raji Suleiman, who represents the Board of Trustees, announced in a Jan. 10 press statement that a memorandum was submitted to the Political Parties Affairs Committee and a lawsuit was filed to prove the invalidity of the decision to dissolve the Board of Trustees.

On the same day, Nasr al-Qaffas, a member of the party's political bureau, announced in a press statement that preparations are underway for internal elections in March to elect a new president and 50 members of the supreme body. Qaffas noted that following these elections, businessmen other than Sawiris will join the party and help with restructuring efforts.

A battle of heated statements broke out between the party’s Board of Trustees on the one hand and its president and parliamentary bloc on the other. In a statement issued on Dec. 31, the Board of Trustees described what happened as a coup, while the opposing side issued a statement on Jan. 1 denouncing the guardianship exercised over the party, asserting that the party is not a company owned by businessmen.

Qaffas revealed in media statements to Egyptian news website Parlmany that Khalil assured Sawiris that the party would be supportive of all of the state's sound decisions and would oppose any flawed decisions, but Sawiris wanted the party to be a fierce opposition party and refused its merger with the Support Egypt coalition, known for its unwavering support to President Abdel Fattah al-Sisi.

He added that Khalil had raised Sawiris' proposal before the party's supreme body, political bureau and parliamentary bloc and all of them refused Sawiris' position.

He also noted that the dispute between Khalil and Sawiris had been boiling up for more than three months when Sawiris started feeling that the Free Egyptians Party was becoming closer to the state, while he wished the party to remain an opposition party. Indeed, the Free Egyptians Party cooperated and coordinated efforts with the Support Egypt coalition and agreed on the controversial Value Added Tax law and Civil Service law, despite the opposition's refusal of these laws.

In press statements, Ahmed Samer, a member of the Free Egyptians Party supreme authority, told Egyptian news website Aswatmasriya that the internal dispute erupted back in March 2016 after Sawiris stopped financing the party to express his dissatisfaction with the party's parliamentary performance and political rhetoric.

Samer noted that Khalil secured the party's financing from March 2016 until the beginning of December 2016, pointing out that after this period a new financier emerged, whom he did not name. He explained that this strengthened the president's position and pushed him to hold a general conference announcing amendments without obtaining the approval of the Board of Trustees.

In a televised interview on Jan. 1 on Sada al-Balad's talk show Ala Masouliyaty hosted by Ahmed Moussa, Khalil attacked Sawiris saying, "Naguib Sawiris and the Board of Trustees treated members of the Free Egyptians Party like a slave." He also said that the dissolved Board of Trustees is similar to the specimen of the Guidance Office of the Muslim Brotherhood and the political regime in Iran.

Tarek Fahmy, a political science professor at Cairo University, told Al-Monitor, "The state has nothing to do with what happened in the Free Egyptians Party. This is an internal crisis between the party's founder and spiritual leader Naguib Sawiris on one hand and the party's President Essam Khalil and a number of party leaders on the other hand, as a result of Sawiris' dominance over the party."

He added, "In any internal partisan dispute, the conflicting parties always accuse each other of being a state's agent without relying on any documents and evidence. If Sawiris has evidence to prove his accusations, he should resort to the concerned authorities instead of launching unfounded accusations."

On the political future of the Free Egyptians Party, Fahmy said, "The crisis will negatively affect the party's performance at the [next] municipal elections, that have yet to be scheduled, as well as the performance of its parliamentary body in the parliament, since internal disputes evolved dramatically and accusations were leveled between the conflicting parties openly before the media."

He ruled out any possibility of reconciliation, as the conflicting parties could not agree on a figure to play the role of mediator to end the crisis, which has reached its peak on all media platforms.

After the overthrow of Sawiris, talks are being heard about changing the party's performance in the parliament to become a supporter of the state and the government. Many are betting that the coming period will witness further cooperation between the Free Egyptians Party and the Support Egypt coalition, to the point of a merger between the two entities. This will only be revealed in the coming period after the departure of Sawiris, who was the obstacle to such a move.