Wafd Party leader Sayyid al-Badawi maintains that bribery and fraud in the recent elections are viable threats that strike at the very heart of Egypt's unstable political life. 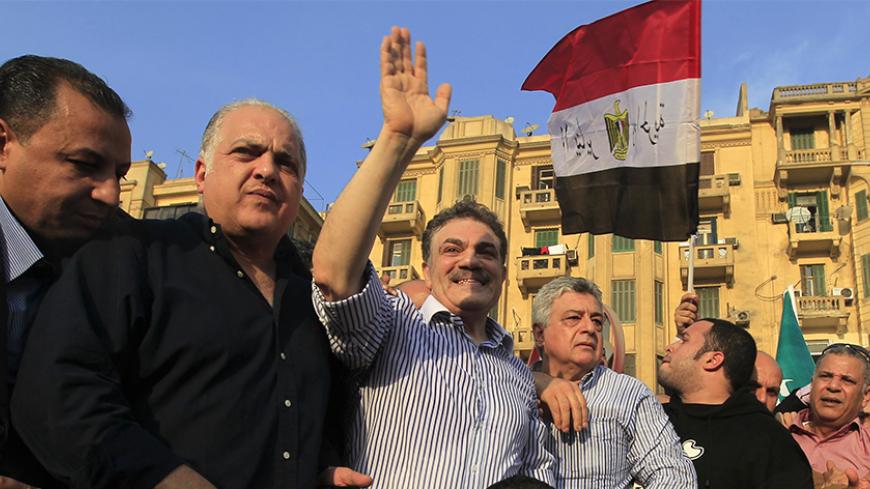 CAIRO — The liberal New Wafd Party is the oldest political party in Egypt. It was founded in 1918 by Egyptian leader Saad Zaghloul under the emblem of Egyptian nationalism, which seeks to preserve national unity among Muslims and Christians.

In May 2010, Sayyid al-Badawi took leadership of the party, which has entered all of the Egyptian elections that have been held since the outbreak of the January 25 Revolution. The party won 45 seats in the latest parliamentary elections, held in two rounds in October and November of 2015. The party came third in these elections after the Free Egyptians Party (FEP) and the Nation’s Future Party.

Badawi, in an interview with Al-Monitor, addressed the negative phenomena that marred the electoral process. These included bribery of candidates as well as vote buying. Badawi said there is an “unclean” route that one has to take to cast a vote. Meanwhile, he praised the state’s impartiality and said it was an unprecedented position in the past 60 years of political life in Egypt.

Badawi said the parties that won parliamentary seats by buying members of parliament are “temporary” parties that only have a short lifespan because they are not based on political grounds but rather can be attributed to certain people. In his view, as soon as these people disappear for one reason or another, these parties will also disappear, as opposed to the Wafd Party, which was founded on national tenets nearly 100 years ago.

Badawi strongly criticized the businessmen who fund parties, pointing out that these negative phenomena had not existed before and now pose a major threat to the political life in Egypt.

Al-Monitor:  How do you assess the recent parliamentary elections, including the first and second stages?

Badawi:  Assessing the electoral process should be divided into two axes. The first is the ballot box, while the second is the route to the ballot box. As far as the first axis is concerned, the state was impartial as it was not biased to any political faction or movement, and Egypt's judges, police and armed forces played a major role in maintaining order and security. For the first time in 60 years, the ballot boxes were clean. As for the second axis, which is the route to the ballot box, it was far from being clean as it was marred by several violations; some candidates resorted to political money, while some voters accepted that their votes be bought.

Al-Monitor:  To what extent did bribery play a part in the electoral process, especially buying candidates or votes?

Badawi:  Political money was used in two phases. The first phase was before the nomination, as some parties paid huge sums to some candidates to have them leave their own parties. Chief among these parties were the FEP and the Nation’s Future Party, which bought candidates from the Wafd Party, among others. Twenty-three of the candidates bought from the Wafd Party won parliamentary seats and now belong to political money parties. My question to those who believe that there are candidates who chose to leave the Wafd Party without any financial temptation is the following: What, apart from money, would prompt any Wafd candidate to leave a party as important as the Wafd Party, which has a political, national history and a record of struggle in order to join other unknown parties?

The second phase is buying votes, which is an unforeseen phenomenon in parliamentary life since 1866. We used to say that the [Muslim] Brotherhood offers electoral bribes to buy votes through commodities such as oil and sugar. This time around, however, huge sums of money were paid to buy votes in front of the very eyes of [election monitoring] committees. For the first time, we found electoral brokers bargaining with candidates to bring voters after collecting their cards, as well as groups to vote for those who pay in cash.

Al-Monitor:  In past statements to the press, you said that some parties spend lavishly during the elections, yet their sources of funding are unknown. Which parties are you referring to?

Badawi:  The funding sources of these parties have become well known. The FEP is funded by a businessman, while the Nation’s Future Party is funded by a number of businessmen, led by businessman Ahmed Abou Hashima. This is according to the party’s head, Mohamed Badran, a hard-working guy whom I respect and wish success for. But the phenomenon of businessmen funding political parties is new and strange, and it poses a major threat to Egypt and its political life. Political competition between parties has turned into financial competition.

Al-Monitor:  Is the party satisfied with the 45 parliamentary seats it won?

Badawi:  Given that the elections were marred by polarization and given that candidates and votes were bought, I can only be satisfied because the Wafd Party has always relied on its national and political history and reform programs. It never resorted to political money. Our MPs were not paid, and they now call themselves the “naive MPs.”

Also, the 45 MPs have a vision, a program and a long experience in parliamentary work. Many of the parties that relied on political money are not real parties, as they do not have many members or cadres and they lack a regulatory structure or a political history. They are all temporary parties, called the one-session parties because they rely on people and not on ideas, principles or tenets.

Al-Monitor:  The FEP won 13 seats in the 2012 parliamentary elections, yet jumped to 65 seats in the recent elections. In your view, what is reason for this huge increase in the number of seats?

Badawi:  The FEP won 43 seats in the first phase in Upper Egypt, where there are provinces in which Christian voters dominate such as Asyut, Sohag, Minya, Beni Suef and Luxor, and thus the reluctance of voters to participate in the elections was a factor that had a significant impact on the success of the largest number of the FEP [candidates]. In the second phase in Cairo governorate, Wafd only won one seat, while the FEP won nine seats in Christian-dominated constituencies such as Shubra, al-Sahel, Farag, al-Zawiya, Sharabia, Qasr al-Nil and al-Hadaeq. I do not blame them for it, because this is the freedom of choice guaranteed by the constitution and the law; I am simply stating the reasons why the FEP outweighed the Wafd Party, and by the way, most of the FEP candidates — if not all of them — are Muslims.

Badawi:  This percentage, unfortunately, is quite low, and I think this is because the Egyptians have voted more than six times since the outbreak of the January 25 Revolution, whether in the constitutional declaration on March 19, 2011, or the elections of the People's Assembly or the Shura, the Muslim Brotherhood’s constitution, and the constitution of the June 30 Revolution and twice for presidential elections. However, their living conditions did not improve, and I think their reluctance reflects a state of general frustration with the country as a result of the difficult economic conditions that followed the two revolutions, in addition to the terrorism threatening the country to derail the Egyptian economy, especially when it comes to tourism and Arab and foreign investments.

Al-Monitor:  Do you believe that the parliament, in its current form, represents all segments of society?

Badawi:  Regardless of the negative aspects I spoke about, I am optimistic about this parliament. The deputies are qualified and will be observed by the people and the media, so they will no longer be prisoners of their thoughts and conscience as before. I hope this next parliament brings hope to Egyptians and succeeds in helping them overcome this state of depression.

Al-Monitor:  The “For the Love of Egypt” list announced that it was forming an alliance called the “Support the State” bloc. Did the Wafd Party join? Why or why not?

Badawi:  We signed the Support the State document, and we are still committed to its principles, which include respecting the constitution, calling to build a modern democratic civil state, respecting public freedoms and establishing the rule of law — and everyone agrees with these principles. However, the coalition, according to the constitutional usage and the constitution of 2014, should be a partisan coalition or led by parties. We have never heard of a group of independents leading a coalition in any parliament around the world. In addition, [Article 5] in the constitution states that political life in Egypt is based on having several parties that peacefully share power, and thus, we must support partisan diversity instead of being dependent on it.

Al-Monitor:  How do you explain the absence of parliamentary representation for the left-wing parties?

Badawi:  Unfortunately, left-wing parties have not developed themselves and have not undergone changes like everyone else. I am sad to see that an ancient party with a great history, such as the National Progressive Unionist Party, only won one seat. We should all support these parties and stand by their side so they would perform their roles.

Al-Monitor:  How do you explain the severe decrease in representation of Islamic parties in parliament, despite the fact that they won more than 70% of seats in the 2012 elections?

Badawi:  The Nour Party paid for the Brotherhood’s acts and bloodshed in the Egyptian street. I believe the Nour Party should be represented in the parliament, and I am against the exclusion of any current whatever their partisan, political and intellectual affiliation is, so long as they do not have blood on their hands and have not resorted to violence and force.

Al-Monitor:  How do you evaluate the performance of Sherif Ismail’s government?

Badawi:  Unfortunately, trembling hands still control the Cabinet. Even now, the president is the one who takes reform steps and launches major national projects. The government did not do anything; it has to keep up with the president and accelerate the pace of their work in order to gain the ordinary citizen’s support. I would like to note that the first government the president presents to the parliament, the party’s parliamentary body will approve of, because the president is the one responsible before the people and there is no responsibility without power. Thus, the president should pick the government that would be able to interpret his thoughts and implement his program so the people would be able to hold it accountable.

Al-Monitor:  What are the bills the party seeks to have approved in the parliament?

Badawi:  We have in the Wafd Party the shadow government, which drafted the party’s electoral program. It has bills in all fields and disciplines and will cooperate with the government, and we will give it all experiences, bills and studies we have available.

Al-Monitor:  In your opinion, what are the most important existing legislations that we need to review in the next parliament?

Badawi:  I am against reconsidering the laws issued by the president; I am with their ratification. The Wafd Party will not impede issuing laws complementary to the constitution, because we are running out of time and we must bring the nation’s ship back to safety.