Despite risk of $62 fine for not voting, less than 20% of Egyptians bothered to show up at polls

An overview of the first round of Egyptian parliamentary elections marked with a low turnout. 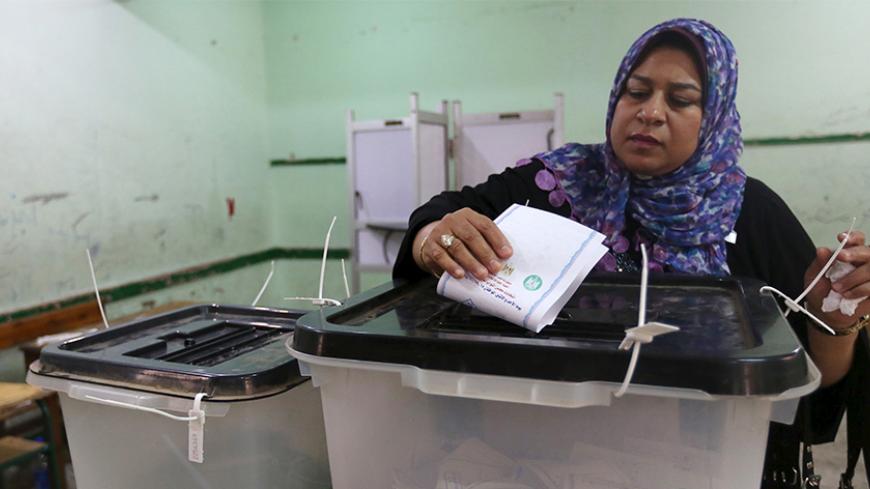 CAIRO — Voters’ indifference and lack of participation marred the first round of parliamentary elections conducted in 14 governorates. Yet, electoral observers expected such an outcome in these Egyptian elections, due to the lack of an effective popular base eager to hold elections, amid a political atmosphere replete with frustration for many political parties and factions, as well as for ordinary people on the street.

Throughout the two days of voting, Oct. 18-19, conflicting figures emerged as to the percentage of voters casting their ballots after the Supreme Electoral Commission announced on the first day of voting that the initial estimated rate of participation was only 1.2% as of the middle of Oct. 18.

This figure raised the ire of the government and official media outlets, which mobilized to urge voters to participate through extensive media campaigns that blanketed official television station airwaves under the slogan of “Inzil” (come down).

Low participation figures sparked cynicism on social networking sites, despite anticipatory statements by President Abdel Fattah al-Sisi on Oct. 17, the eve of the first day of elections, urging voters to participate: “I call on you to rally strongly once again, in order to complete this last milestone that we all agreed upon.” He added, “Egyptian youth must take the lead on election day.”

The government did try to contain the issue, with the Council of Ministers declaring Oct. 18 that the workday on the second day of elections would be cut in half and end at 11 a.m. in order to encourage employees to head to the polling stations.

In parallel, the minister of local development, Ahmed Zaki Bader, on Oct. 19 threatened laggards with the law, insinuating that those who were registered but refrained from voting without a valid excuse (which the law does not specify) would be fined 500 Egyptian pounds ($62) in accordance with Article 57 of the Law on the Exercise of Political Rights.

A number of military vehicles roamed the perimeter of some polling stations in Giza governorate during the first day of balloting to invite citizens to vote to the tune of patriotic music, while the governor of Alexandria, Hani al-Misery, proclaimed on the second day of voting that the use of public transportation would be free on election day.

On Oct. 19, Prime Minister Sherif Ismail, after conducting a quick visit to the Council of Ministers’ situation room, issued a statement indicating that “voting rates had reached 16%,” although the head of the Judges Club, Abdallah Fathi, announced that “participation on the first day did not exceed 2%, and reached 6% on the second day.”

In field visits conducted by Al-Monitor during the two days of voting to four polling stations in the Dokki and Agouza districts of Giza governorate, low turnout rates were noted in districts where a number of political and media icons were running, such as independent studies professor Amr el-Shobaki, Ahmad Mortada Mansour, the son of the Zamalek soocer club chairman, and Abdul Rahim Ali, the editor-in-chief of a daily newspaper, al-Bawaba news.

As she headed to cast her vote, Mirfat Hussein, 50, told Al-Monitor, “I am participating out of fear that Islamists and remnants of the old regime would prevail. But I do not expect to be well represented in parliament.”

Along the same lines, a number of young people interviewed by Al-Monitor on the outskirts of Dokki and Agouza neighborhoods indicated that they lacked confidence in parliament and its ability to echo the opinions of the Egyptian people. In that regard, Mohamed Hosni, 20, said, “I do not have a lot of trust in the candidates ... and do not expect them to back youth-related issues.”

Hazem Baily, 37, disapprovingly said, “I did not know that there were elections being held in the first place.”

Political activist Safwan Mohammed talked with Al-Monitor about the reluctance of young people to participate, and said, “Lack of participation by the youth in these elections is clear to everyone; the reason simply is that most young political front-runners in Egypt are currently jailed.”

Safwan, who was a candidate in the parliamentary elections of 2011, added, “The absence of a free political climate deprives parliament of its importance. Not to mention the lack of a mechanism guaranteeing pluralism.”

The low voter turnout in the first round of these parliamentary elections raises questions as to the legitimacy and popular base of the next parliament, which will be formed amid political turmoil and probably be controlled by men affiliated with Sisi and people who are strong defenders of his opinions.

While low turnout may affect the election's overall legitimacy at home and abroad, there is no legal basis for such an occurrence to overturn the election. Constitutional law expert Mohammad Nour Farhat told Al-Monitor, “Weak participation is a serious indicator of the Egyptian street’s dissatisfaction in relation to elections that have been long delayed, since the adoption of the July 2013 road map. Parliament will lack political and popular legitimacy, but will retain its legality.”

Based on information gathered by Al-Monitor from the Council of Ministers’ situation room, the campaign headquarters of political parties, and the reports of observers from Egyptian organizations, Al-Monitor noted that a number of concerns were raised about the tardiness and failure of a number of judges to assume their electoral supervisory roles; this forced the Supreme Electoral Commission to merge, on the first day of voting, 89 committees in a number of governorates due to the shortage of judges and advisers. For its part, the Judges Club announced on the same day that some judges had received threatening anonymous phone messages to dissuade them from taking part in the elections.

In this regard, the spokesman for the Judges Club stated to Al-Monitor, “Those messages were reported and are being investigated.”

Yet, he denied that they were the reasons for the reluctance of some judges to participate in the elections, and added, “The judges are working hand in hand with the state to make these elections a success. Adequate measures have been taken to safeguard the participation of judges during the two electoral days.”

Of note during the first round of elections was the introduction of two electoral districts for Nubia, Halayeb and Shalateen, which were unrepresented in previous parliaments. Compared with the fluid situation in other first-round districts, turnout in those two new districts was relatively better, for reasons that observers attribute to the desire of their inhabitants to be represented in parliament, where their interests may be defended.

Voting by Egyptians abroad — which the political regime is waging on for support — was not much different from the trend back home. Preliminary count results from Egyptian embassies abroad from Ministry of Foreign Affairs data obtained by Al-Monitor indicated that participation levels were less than expected, with Kuwait (8,000 voters) and Saudi Arabia (5,000 voters) recording the highest voter turnout, with the For the Love of Egypt list garnering a majority of votes and the Salafist Nour Party’s list receiving the least number of votes; the results will be officially announced Oct. 21.

As initial first-round ballot counts indicated that regime loyalists in the For the Love of Egypt list would prevail with the emergence of a number of candidates not known for their opposition to the regime, observers told Al-Monitor that they expected the second round to follow the same general trend and lack strong participation overall; still, they expected that there would be some attempts by candidates to mobilize people and even to resort to electoral bribes — a few such cases were recorded in the first round of voting.