Hamas leader Ahmed Youssef sees the critical light he shines on his own party as essential to its legitimacy in Gaza, though many others among the leadership wish he would toe the line. 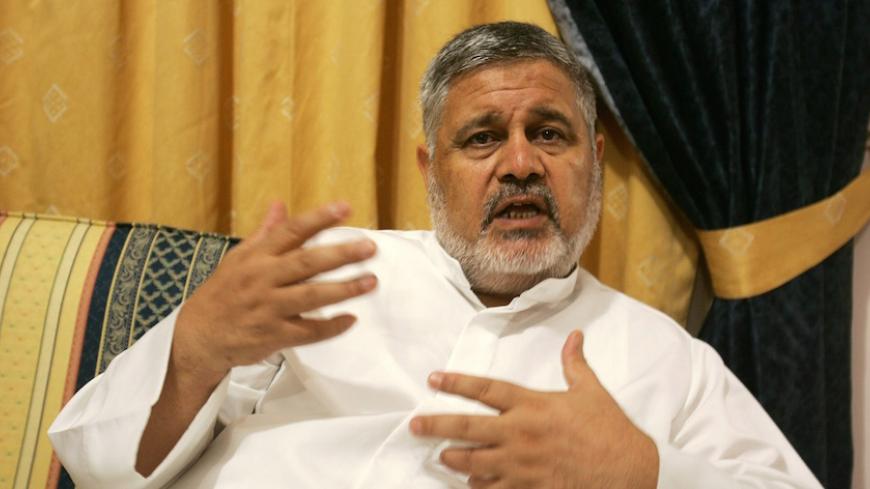 Ahmed Youssef, adviser to the deputy chairman of Hamas’ political bureau, Ismail Haniyeh, speaks as he sits at his home in Rafah, in the southern Gaza Strip, Aug. 16, 2007. - Getty Images/Abid Katib

GAZA CITY, Gaza Strip — Ahmed Youssef, a member of Hamas’ Shura Council and former political adviser to former Prime Minister Ismail Haniyeh, has always sung a different tune, owing to his honesty and moderate positions on political and social issues. His academic background includes a master’s degree in media and a doctorate in political science. Youssef has written dozens of books, including “American Muslims: A Community Under Siege.”

Youssef regularly writes articles for local websites criticizing Hamas’ performance, such as his piece published in 2014 headlined, “Have mercy on Gaza and return favor to its residents.” In this article, Youssef held both Fatah and Hamas responsible for the ongoing Palestinian division, as these movements put their partisan interests above those of the nation. He also said that Gaza is going through an “unprecedented unstable political situation.”

In another article he wrote in January 2016 for Samanews, “Yes, we went wrong, but dare we admit it?” he asked, “Why do Islamic movements generally fail in politics and governance? Why are their chances of winning dropping at the popular level and why are they unable to keep their promises of change and reform?”

Youssef's criticism is not limited to Hamas. His office often receives citizens who come to him to complain about the oppression exercised by the Hamas-controlled security forces, asking him to act as mediator.

These citizens have included youth activists targeted by a series of arrests after the events of March 15, 2011. Thousands of youths known as the “March 15 Movement” took to the streets and called for the end of the division between Hamas and Fatah. They raised a banner reading, “The people want the end of division,” against the backdrop of the Arab revolutions that erupted during the Arab Spring. However, these youths were repressed, beaten and arrested by Gaza’s security services.

Other citizens also appealed to Youssef, especially from the Salafist movement after the security crackdown in April 2015, when the Gaza security services arrested prominent Salafist jihadist Sheikh Adnan Mayt. A series of arrests and house raids of other Salafists followed.

Youssef has also criticized security measures against public figures such as the travel ban imposed on novelist Atef Abu Seif in February 2015 because he is a political activist from the Fatah movement. Youssef wrote on Feb. 14, 2015, for Maan News, “It is an honor for Hamas to have different or contrary opinions [internally]. This gives us an argument to defend our democracy and our project.”

Abu Seif told Al-Monitor, “Leader Youssef is known for his bold national stances that uphold the national interest over partisan interests and espouses many humanitarian positions.” He added, “He always stood by the oppressed in the Gaza Strip and strongly opposed and criticized political arrests. He never hesitated in defending political opponents and their right to express their disagreement.”

Youssef’s honesty has often stirred campaigns against him, including one that was waged when he revealed at the end of April 2015 that discussions were being held with the Israeli side through a European intermediary. The discussions revolved around the Israeli prisoners captured by the resistance during the 2014 war, the Gaza port and airport issue and the truce dossier. The report raised a wave of criticism against him on social media and soon ignited a heated debate between him and Hamas leader Ismail Radwan. This was the first public dispute between Hamas leaders.

On April 29, 2015, Radwan said in a TV interview, “Youssef does not represent Hamas’ official view and does not reflect its position, but only expresses his personal opinion. He is speaking in his personal capacity, just like any politician or analyst.”

The dispute resurfaced this month. Youssef had told Arab and local media outlets March 13 that Hamas’ visit to Egypt is the product of a Saudi initiative, prompting the movement to reply in an official statement confirming that Youssef’s statements do not represent its official position.

The Hamas delegation’s visit to Egypt came days after Cairo accused the movement of being involved in the assassination of former prosecutor Hisham Barakat on June 29, 2015. The delegation met with Egyptian intelligence leaders to discuss the relations between Hamas and Egypt and the opening of the Rafah crossing.

Commenting on this statement by Hamas, Youssef stressed that the media must be rigorous when reporting information and statements.

Soon after, it was revealed that he is suffering health complications. Youssef, however, denied that his indisposition was caused by the movement’s statement, which some suspected of being a step leading to his dismissal or exclusion.

During a March 24 meeting in his office, he told Al-Monitor, "This was a mild physical setback caused by work pressure. Nothing can prejudice my position within the ranks of Hamas. I have held this position for 45 years.”

Youssef, a member of Hamas' Shura Council for about six years, said, “I will not run as a candidate for any leadership position in the next Hamas internal elections,” pointing out that the current aging leaders must step down to give young people an opportunity to take the lead. “When turning 60, a man loses his energy and ambition, and his mentality no longer fits the contemporary era,” he said.

Youssef confirmed that he is not afraid of losing status because of his explicit positions. He added, “I have assumed various positions, and I have my standing, of which I am very pleased. I only have to be honest with people. This is our religious, national and social responsibility.”

He explained that he is different from other political leaders, saying, “People feel that I think outside the box, and this is true. I have the courage to declare my political analysis and disclose any information in my possession owing to my experience and historical background.” He added, “My job is not to commend and praise the leadership or please people by telling them what they want to hear."

He confirmed that Hamas is undergoing serious internal reviews, mainly in terms of political partnership with Fatah and other Palestinian parties.

Commenting on the criticism against him concerning the alleged discussions with the Israeli side, he said, “My office is open to everyone. Europeans come to talk to me since I am fluent in English and I have international relationships. I, on the other hand, undertake to deliver their message to Hamas. But there are some limitations that I cannot breach.”

Well-connected observers told Al-Monitor on condition of anonymity that Youssef played a major role in persuading Hamas to break out of its isolation by connecting with Western parties and civil society organizations. They also recalled that he opened a channel of communication with Turkey.

They indicated that his critical approach is his way of bringing Hamas closer to the people of Gaza and attenuating their aversion toward the movement, especially after the spread of arbitrary security measures and political arrests.

The observers added that in his articles, Youssef had called on Hamas to form a political partnership with Fatah and the rest of the Palestinian parties in power in 2006, but no one listened to him. Today, it appears that his idea was the right one.

Youssef is often the victim of criticism from within his own party, which sees him as having strayed from the movement’s political direction. He also faces criticism from the public, which claims he is trying to make Hamas’ positions look more liberal than they really are.

Despite both views, Youssef's is a voice that cannot be ignored and enjoys influence on the Palestinian political scene.