While the demonstrations along the Gaza border fence continue, the number of casualties will grow, sparking ever larger protests in the West Bank. 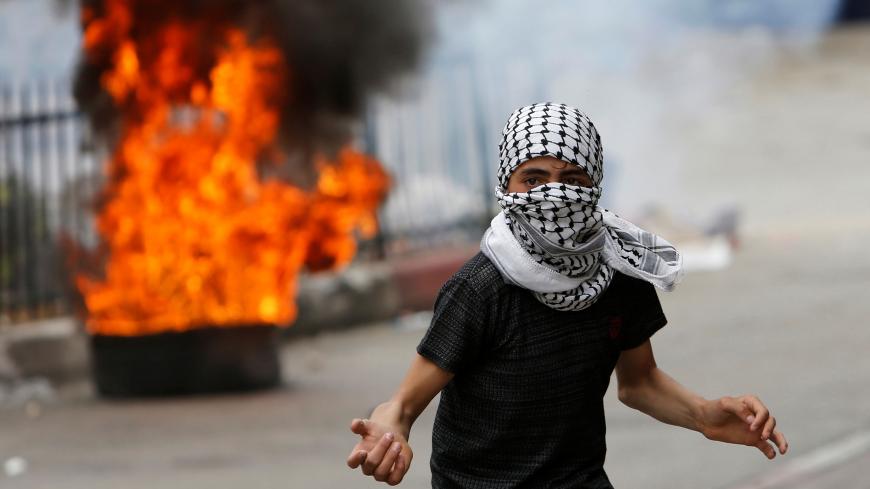 A Palestinian protester is seen in front of a burning tire during clashes with Israeli troops in Hebron, West Bank, May 4, 2018. - REUTERS/Mussa Qawasma

It is hard to say that the situation was unexpected. The number of clashes in the West Bank increased in the beginning of June, as young Palestinians faced off against the Israel Defense Forces (IDF) amid spontaneous outpourings of rage over events along the border with Gaza. In Nabi Saleh in southern Mount Hebron, 21-year-old Izz ad-Din Tamimi was killed by IDF fire on June 6. According to the IDF, Tamimi was shot dead after throwing rocks at an IDF force operating in the region. In the Jalazoon refugee camp near Ramallah, violent clashes with the IDF take place on an almost daily basis with the throwing of stones and Molotov cocktails. The same is happening in other refugee camps across the West Bank near Bethlehem, Nablus and Jenin.

The possibility of West Bank Palestinians clashing with the IDF in sympathy with the border fence protests has been discussed by the security forces ever since the Gaza protests began. Fear of a violent outburst in the West Bank increased as the number of Palestinians killed and wounded in the Gaza Strip increased, as the photos of the victims flooded Arab broadcasting and social media networks.

Unlike Gaza, which is hermetically sealed from every direction, the topographical situation in the West Bank is much more complex despite the incomplete separation wall. Friction between West Bank Palestinians, the settler population and the IDF is high, and any violence between them could be lethal. It could ignite the entire West Bank.

The West Bank and Gaza Strip are two distinct entities, separated by some distance. Ever since the Hamas takeover of Gaza over a decade ago, the two Palestinian territories have diverged mentally as well. The alienation between Gaza and the West Bank has grown over the years, and each territory can be said to have its own distinct national character.

Indeed, many Fatah supporters in the West Bank consider Hamas responsible for Gaza’s slow death and identify with the suffering of Gaza’s residents throughout all the years of the closure. When Palestinian President Mahmoud Abbas imposed sanctions on Hamas that were harmful to the people of Gaza, protests against him in the West Bank were widespread and scathing. Nevertheless, the young people of the West Bank have been focused for years on their own miserable economic situation and the state of the Palestinian Authority (PA). All they know about Gaza's suffering and travails is what they have seen on television or heard from friends and family who live there.

Over the years, the rage and protests of young people in the West Bank over what is happening in Gaza has translated into local clashes during Israeli military operations in Gaza. It is as though they must be reminded that they are part of the same people and must, therefore, protest for and even avenge their fellow Palestinians.

During the IDF’s three operations in Gaza — Cast Lead (2008-2009), Pillar of Defense (2012) and Protective Edge (2014) — Palestinian security forces forcibly quashed all protests out of fear that they would devolve into chaos that would have a negative impact on the PA. They were concerned that a mass protest would lead to clashes with the IDF in the West Bank that could spin out of control, putting the existence of the PA at risk.

Abbas' situation today is different from what it was in the past. For someone who is constantly being humiliated by the United States and Israel to order his security forces to fight against the outbursts of rage in the refugee camps could be seen as collaborating with the enemy. Abbas was once capable of dealing with the attacks against him and showed a statesmanlike political courage and wisdom in facing the wave of individual terrorism that broke out in October 2015. This time, however, it doesn’t look like he is willing or able to do so. Abbas has not ordered that these incidents be stopped even though he considers Hamas (who threw Abbas’ people out of the Strip in 2007) to be the group most responsible for the current situation in Gaza.

The security cooperation with Israel that Abbas once described as “sacred” continues, but in keeping with his orders, the highest ranking members of his security forces are prevented from cooperating openly with the IDF and Shin Bet. All coordination with the Israelis is very low key.

The problem is not just that Abbas is furious about Israel’s policy toward him. It is also that the IDF refuses to respect the restrictions placed on its activities in Area A by the Oslo Accord. According to Palestinian sources, IDF special forces makes arrests in territories under the security control of the Palestinians on an almost daily basis. Morale among the upper ranks of the Palestinian security forces is at a low reminiscent of the second intifada. They simply do not want to do all the work for what they call the “ungrateful” Israelis.

There is another parameter that should be added to all this. The leaders of Hamas want to expand the popular border fence protests to the West Bank, and they are working openly toward that end without any fear of consequences. They were active in West Bank mosques during the entire month of Ramadan without anyone intervening. The West Bank’s Preventive Security forces used to arrest Hamas activists for activities it deemed to run “counter to Palestinian interests.” Now it is ignoring what is happening in the mosques, as well as Hamas' calls to young Palestinians to stand alongside their heroic brothers in Gaza and act. The message is clear: Identifying with the plight of Gaza cannot be relegated to the heart. It must also be expressed in actions. Based on the shifting mood in the territories over the last week, young Palestinians got the message and are responding accordingly.

As far as the Israeli security forces is concerned, as long as the Palestinian protests don't spread all across the West Bank and remain limited to demonstrations and local clashes, the IDF can contain them even without the Palestinian security forces. On the other hand, the longer the border fence protests in Gaza continue and the casualties mount, Hamas will continue to recruit young people in the West Bank unhindered and local protests in the refugee camps will expand and become more vociferous. While Israel fails to treat Abbas like a partner, it will have to deal with two raging fronts that will not calm down on their own.