Israel’s war on Gaza, with its heavy civilian casualties, is fueling already tense clashes between Palestinian youths and Israeli soldiers in the West Bank. 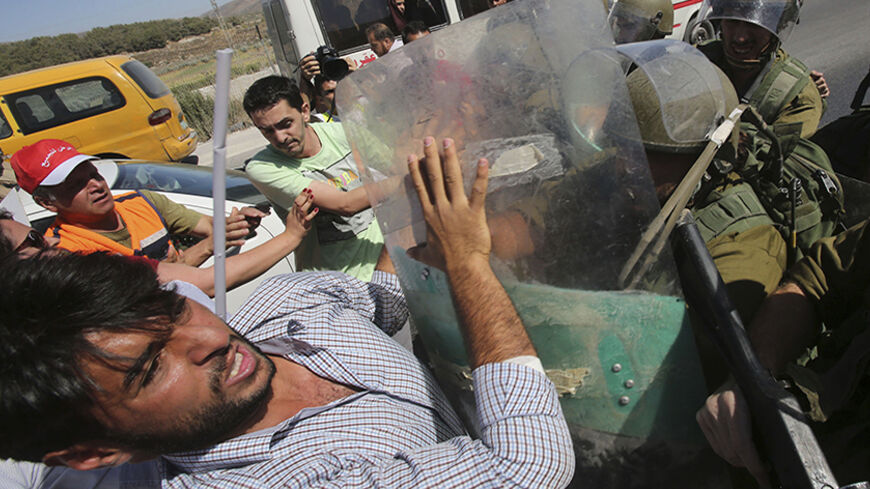 Israeli soldiers scuffle with Palestinian protesters during a protest against the Israeli airstrikes in the Gaza strip, at Hawara checkpoint near the West Bank city of Nablus, July 14, 2014. - REUTERS/Abed Omar Qusini

RAMALLAH, West Bank — On the night and early morning of July 11-12, the cities of the West Bank and Arab towns inside the Green Line experienced violent confrontations, including at checkpoints and Israeli military camps, in a scene not seen for several years. The clashes, which resemble those of the intifada in West Bank cities, have accelerated in conjunction with the escalation of the war on Gaza, entering its second week, and the possible war crimes committed against civilians there.

The clashes have been ongoing in Jerusalem and Palestinian cities and towns inside the Green Line since the kidnapping and killing of teenager Mohammed Abu Khdeir by three Israelis, two of whom were settlers, on July 2. The confrontations have expanded in scope, diversified and intensified.

On the ground, one can sense that the situation in the West Bank is rife with tension, as protests have spread throughout cities and towns. The clashes have been most violent in Bethlehem, Hebron, Jerusalem and Ramallah. During the July 11 protests, Palestinian youths set the Qalandia military checkpoint ablaze, which forced Israeli soldiers to briefly evacuate it and allow young Palestinian men to take control of it.

Al-Monitor noted that more than 30 towns and villages witnessed violent clashes on July 11-12, involving thousands of young people. Dozens of Palestinians were wounded by live ammunition and rubber bullets. One young man who participated in the clashes in front of the Bethel settlement told Al-Monitor, “We will rise against Israel. We will stage daily protests in front of Bethel and Awfar, and we will throw stones and Molotov cocktails.”

A man holding Molotov cocktails ready to be thrown told Al-Monitor, “We want to burn them just like they burned Mohammed Abu Khdeir and the children of Gaza with missiles. An intifada should breakout to support Gaza and relieve its people from the war.” Another man, lighting tires on the street near Bethel, stated, “The [Palestinian] Authority is trying to prevent us from clashing with the occupation forces and is haunting us, but we will continue fighting and confronting the soldiers.” He added, “We are participating in the confrontations at night and until dawn since it is the month of Ramadan and temperatures are high [during the day].”

The clashes with Israeli forces are occurring without planning or orders by political forces, factions or parties, given the lack of a united popular national leadership tasked with developing a program for national struggle. The Palestinian Authority (PA) is seeking, through its security apparatus, to control confrontations by erecting security checkpoints and heavily deploying its members in the vicinity of Israeli army checkpoints and camps to prevent people from moving forward. This has also led to clashes with Palestinian youths, such as at the dispersal of a rally in Hebron on July 11.

Palestinian President Mahmoud Abbas said in an interview with Lebanon’s al-Mayadeen TV on July 11 that he will not accept the Israeli government turning the situation into an intifada. Abbas' statements were described by Hamas as “putting the victim and the executioner on equal footing.” In a press statement issued July 12, Hamas said, “We call on our people in the West Bank, Jerusalem and the occupied territories of 1984 to a massive popular uprising on Friday, in solidarity with the Gaza Strip, as a sign of loyalty to the blood of the martyrs shed across Palestinian cities, in support of the Palestinian resistance. We want to express our refusal of any conspiracy plotted against the Strip.”

Ahmad Zaki, a student at the University of Jerusalem, which is witnessing almost daily clashes, spoke to Al-Monitor about the rising tensions in the West Bank due to the Gaza war. “Young people are very angry at the ongoing massacres in Gaza as well as at the position of the PA standing idly by, maintaining security coordination with Israel and trying to stop these young men from reaching engagement points.” He asserted, “The war on Gaza accelerated the pace of the confrontations that broke out following the killing of the martyr Mohammed Abu Khdeir.”

The parliamentarian Khalida Jarrar, a leader of the Popular Front for the Liberation of Palestine, told Al-Monitor, “The Palestinians are heading toward a state of permanent confrontation with the occupation since Israel’s crimes, arrests, shellings, killings and settlement activities have increased.” Jarrar said, “The confrontations we are witnessing today are a prelude to an upcoming explosion. We must have a national popular leadership that can communicate and achieve positive results for the best interest of the Palestinian people. All forms of security coordination must be stopped, political protection should be provided and no form of appeasement shall be accepted.”

Fatah parliamentarian and former prisoner Jamal Huwail told Al-Monitor that among Palestinians in the West Bank and Gaza and in cities in Israel an overwhelming rage prevails against the Israeli practices toward them. Huwail, one of the leaders of the battle in the Jenin refugee camp during the second intifada, said, “I am fully convinced that no potential popular uprising will fall in our favor unless we are united and have a unified national leadership.” Huwail believes that the people stir revolutions, not an official or leader of a faction.

Regarding the recent confrontations, Huwail said, “The overwhelming anger is caused by the practices of the occupation. The killing of the teenager Mohammed Abu Khdeir and the war on Gaza pushed young men to confront the occupation. This is the pulse of the street, and there are no leaders today who have stood up. The leaderships suffer from decay and have lost the confidence entrusted by the Palestinian street. No one can decide whether there will be an intifada or not. The people alone will decide.”