Israel successfully intercepts rockets fired from the Gaza Strip, but fails in addressing the threat of incendiary kites launched by Hamas activists. 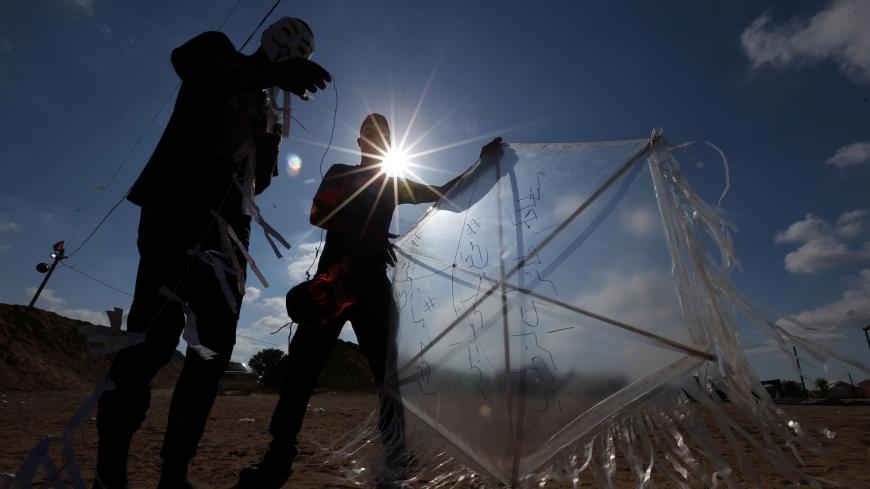 Palestinians prepare to fly a kite loaded with flammable material to be thrown at Israel, near the Israel-Gaza border in the central Gaza Strip, June 4, 2018. - REUTERS/Ibraheem Abu Mustafa

The exchange of violence between Israel and the Gaza Strip at the end of May revealed another remarkable achievement of Israeli technology. For the first time ever, Israel’s Iron Dome anti-missile system successfully shot down barrages of short-range mortar shells fired extensively by Palestinian Islamic Jihad and Hamas at Israeli settlements adjacent to the border fence. Few people believed that it would be possible to shoot down mortar shells that are small targets, in the air for such a short time and travel such a short distance. But it happened. Engineers from Rafael Advanced Defense Systems overcame this difficulty and made it possible to shoot down the tiny shell, despite it being fired at a steep trajectory toward a relatively close target. Iron Dome has achieved an impressive rate of success in doing this, eliminating yet another terrorist threat against the Israeli population living along the border fence.

This significant achievement has flown under the radar because of the incendiary kites being launched from Gaza. For the past few weeks, Israel has been left helpless in dealing with the new Palestinian “weapon,” which sets its fields and settlements on fire on a daily basis. Israel is a cyber superpower. The high-tech nation is a leader in drone technology. It sends satellites into space and can shoot down everything from mortar fire to intercontinental ballistic missiles that fly outside the earth’s atmosphere (with its Arrow missile system). Nevertheless, it doesn’t know what to do about kites flown from the Gaza Strip with flaming torches attached to their tails. These kites ignore the border fence, the underground border obstacle, the air force, the navy, ground forces, tanks and snipers. Their load, consisting of a small Molotov cocktail or a smattering of hot coals, has succeeded in setting fire to Israeli fields at the height of the harvest season.

On June 5 alone, these kites were responsible for some 15 fires in the south, with one of them raging over a large area along the fence of Sapir College, just outside of Sderot. These fires have destroyed about 10,000 dunams (approximately 2,500 acres) of crops and natural wooded areas. Some of these fires threatened residential areas. As for a solution to the problem? Israel has none.

This is becoming a competition between the most innovative and advanced technology in the world and the primitive means of long ago. Kite flying has always been popular in Gaza because of its beach, winds and geographic conditions. Hamas has now weaponized this popular childhood pastime and turned it into a means of spreading terror.

The irony is that Hamas is actually following the model of a story told in chapter 15 of the Book of Judges and known to all Israelis as Samson’s foxes. According to the story, Samson captured 500 foxes, tied them in pairs by their tails and attached a torch to each pair. Then he released them in the Philistines’ fields during the harvest season, setting the fields on fire. Now Israel finds itself in the exact same location (the Philistines lived in the vicinity of modern-day Gaza), but on the wrong side of the fire. It can block and seal off Hamas’ attack tunnels, the sea, the ground routes and even the air with its top-notch air force, but it is unable to deal with something as simple as a kite. These kites fly low. They are made of transparent plastic wrapping, and they are relatively tiny. This makes them almost unpredictable and unstoppable. Often, the simplest things can be the most powerful.

Not quite. Defense Minister Avigdor Liberman said June 4 that ever since the phenomenon began, some 600 arson kites have been sent from Gaza to Israel. The Israel Defense Forces (IDF) blocked about 400 of these with gliders, snipers and other means. The remaining 200 reached Israel, where they were remarkably successful, causing 198 fires. In other words, almost every kite that landed in Israel started a fire, and this happened before the summer season, which makes the entire area particularly flammable. Meanwhile, protests are becoming more vocal on the Israeli side of the border. Farmers are losing their entire livelihoods all because of a kite, and local residents are living in a state of constant terror. Aerial photographs of the region show vast stretches of once green land that are now blackened and charred. Israel is also having problems with its aerial firefighting planes, which fly low and are therefore vulnerable to gunfire from the Gaza Strip.

Israel’s defense establishment has a problem, and the best minds are searching for a solution. One example of a solution is having two gliders flying just a few dozen meters from each other, connected by a nylon string that can slice through the kite string and bring it down. While there are other embarrassing solutions of this sort, some members of the Cabinet are insisting on a change of policy instead. Public Security Minister Gilad Erdan has demanded that the people launching these kites be classified as terrorists in every sense of the word. This would mean that the IDF would use the air force to identify and fire at them while they are releasing the kites. The IDF, on the other hand, is firmly opposed to this policy. Most of the kites are being flown by teens. Targeting them would spark an international commotion. It would spur such harsh criticism that the whole effort would not be worthwhile, especially with Israel already facing widespread criticism over its uncompromising policies to block the waves of Gazans storming the fence. Military sources told Al-Monitor that these kites do not pose an immediate or serious threat. Furthermore, most of the kites are flown just over the rooftops of Gaza’s homes, with most of them flown from the homes themselves. It would not be feasible to fire a missile at a house just because a kite rose above it. It would make no sense.

Erdan and several other ministers think differently. They believe that the kites are terrorism. Period. They also claim that Israel’s policy will change as soon as a kite results in injuries or deaths. Only deterrence will prevent this phenomenon, and the instigator of this terrorist activity is Hamas. Over the last few weeks, kites landing in Israel have included detonators, timers, cell phones and other indications that this is just the beginning of an attempt to attach small explosive devices to them. According to one IDF assessment, the next generation of kites will be more like flying bombs than flying Molotov cocktails. It is a disconcerting evolution. The kite threat should be eliminated, said Erdan, before it becomes a dangerous explosive glider.

There is, of course, a middle option. Israel has defined all attempts to attack the border fence as terrorist incidents and set an immediate threshold for responding to Hamas. It is defined in the exact same way as the firing of rockets into Israel from the Gaza Strip. The kites can also be declared terrorism, with Hamas targets getting bombed in response as soon as any kite lands in Israeli territory. But once again, the political leadership is reluctant to do this. It may be that the objective is impossible to meet, given the large number of kites and the small number of high-quality Hamas targets across the fence. Regardless, the Israeli Cabinet has yet to hold a formal discussion about the problem. They are waiting for a technological solution, hoping to find one before everything burns to the ground.