Will Gaza kites lead to war with Israel?

Many have been surprised by the effectiveness of the incendiary kites flown from Gaza that are frustrating Israeli politicians, flummoxing the Israeli military and attracting worldwide attention. 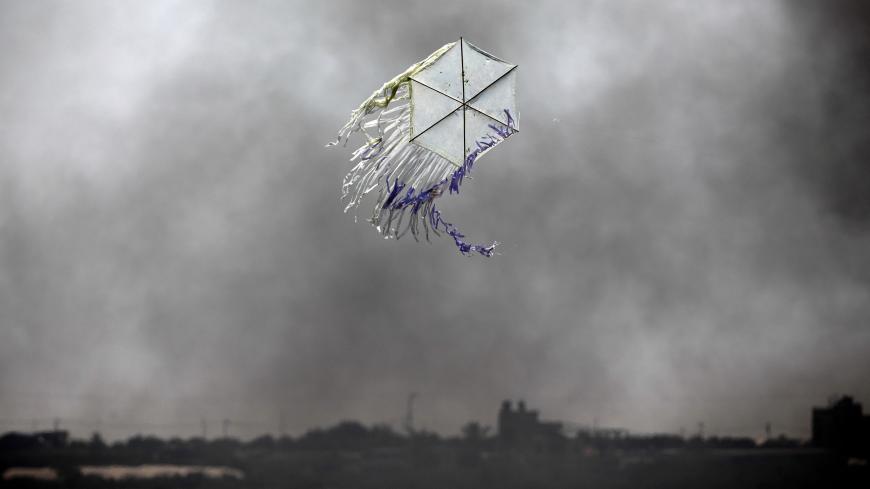 A kite flies over the border between Israel and Gaza Strip, June 8, 2018. Kites and balloons have been used to cause blazes in the area. - REUTERS/Amir Cohen

Although Israeli politicians are pressing the military to adopt harsh measures against Gaza for the incendiary kites being dispatched into Israel, the army is displaying more responsibility, being careful to avoid an escalation that could result in all-out war.

“The south is going up in flames,” Justice Minister Ayelet Shaked said in a June 19 interview with the Ynet website. “Those who launch incendiary balloons or kites should face the same fate as those who launch rockets. … I'm certain the IDF [Israel Defense Forces] will act with determination against Hamas.” Her comments reflect the position of her party, HaBayit HaYehudi, as well as other politicians’ deep frustration with the inability of one of the world’s most advanced armies to respond effectively to the kite attacks.

According to data presented June 14 to the Knesset’s Foreign Affairs and Defense Committee, the airborne firebombs from Gaza have set off 412 fires in Israel, incinerating 25,000 dunams (6,180 acres) of crops, with damage estimated at 7 million shekels ($1.92 million) at a minimum. While a military response to the kites would presumably be more expensive, the damage cannot be measured by a monetary value alone.

The smoke spiraling up from the Gaza border communities in recent weeks probably has implications for residents’ health, especially babies and those with breathing difficulties. The damage to the environment and wildlife is significant. Border residents, under constant threat of rocket attacks, are now also choking on smoke and suffering other attendant damage, paying a price for their leaders' procrastination in resolving the problems surrounding the closure Israel has imposed on Gaza. Successive Israeli governments have dragged their feet for 11 years, hoping the problem would somehow resolve itself.

Military doctrine formulated by the IDF, one of the world’s strongest and best-armed militaries, is lacking when it comes to the mass protests organized by Hamas since March 30 along the border fence as well as to the burning kite campaign. While Israel deployed ground and air forces, supplemented by snipers, to ward off breaches of the border fence by demonstrators, only the air force can provide a response of sorts to the kites. Either way, the situation is complex. However one looks at it, a sophisticated fighter jet sent to deal with a weaponized piece of paper presents the army with obstacles and challenges that it has likely never encountered.

With ministers in the Security Cabinet demanding that the army deal with the kites as they would with a Qassam rocket, the military leadership has tried to explain that snipers deployed in observation posts along the border cannot detect the devices dispatched from deep within the enclave. As a result, it is not possible to use warning shots to pre-emptively scatter potential kite flyers. Therefore, the only way to intercept the kites is with targeted tank or canon shells or with the type of airborne systems used to strike rocket launchers, a method that would likely kill or injure many of the kite flyers and drag Israel into a widespread military operation in Gaza.

The current approach involves the intensive deployment of drones, at a density reminiscent of major military campaigns, to detect the dispatchers and fire warning shots from the air at Hamas positions or empty cars — likely a more expensive proposition than the 7 million shekels in fire damage to Israeli farmers.

Confronting a kite with a fighter jet is reminiscent of the embarrassment the IDF experienced in the first intifada, which broke out in 1987 and came to be known as the “stone intifada.” Despite the impressive arsenal with which the IDF had vanquished Arab armies in previous wars, it had a hard time dealing with the hail of rocks that rained down on Israeli troops. Now Gazans are talking about a “tiyara intifada” — “tiyara” in Arabic being an airplane, and “tiyara waraqia” being a paper airplane, or a kite.

Most ministers at the Security Cabinet meeting held June 18 demanded that the IDF revise its policy and treat the dispatchers of the fiery kites as they would rocket launchers. In other words, the ministers want the IDF to shoot at the Palestinian dispatchers the minute they are detected, while the army argues that most of them are young men, youths and even boys, and that killing or maiming them would have a detrimental effect on the image of the IDF and Israel.

So far, the policy of restraint and warning shots has not deterred the kite flyers, and the number of daily blazes continues to increase. On the night of June 19-20, probably as a result of political pressure, the IDF intensified its response and struck at Hamas targets in Gaza to remind the organization’s leaders that Israel will exact a price for every fire ignited by a kite.

Will this deter Hamas? Highly unlikely. A Hamas source speaking on condition of anonymity told Al-Monitor that the leadership was surprised by the kites’ effectiveness in Gaza’s campaign to end the Israeli siege. The source said the flying of kites was begun as a local initiative by young Palestinians during the border protests dubbed the Great Return March. When it transpired that the kites were causing extensive damage, attracting international news coverage and affecting international public opinion, Hamas decided to exploit the effect of the “paper planes” fully.

The source said the border protests will continue, albeit while attracting a smaller number of residents. People are getting tired of the demonstrations, sensing that they have served their purpose and that now it is the turn of the kites. That is why for now, Hamas will only turn out limited numbers of protesters, while letting the young people “drive the Israelis crazy with fire,” said the source.

The extensive IDF airstrikes June 19-20 elicited a barrage of dozens of rockets and shells fired at Israeli communities — the exact scenario predicted by the military shortly before the escalation into which it was pushed unwillingly.

Hamas leaders, high on the smell of Israeli crops set ablaze by the kites, risk finding themselves in an all-out war with Israel, which will no longer be child’s play.