Netanyahu feeling the heat from Gaza

Israelis on the right are fed up with incendiary balloons and kites launched from Gaza, forcing Prime Minister Benjamin Netanyahu's hand to unleash the IDF against Gaza for fear of paying an electoral price. 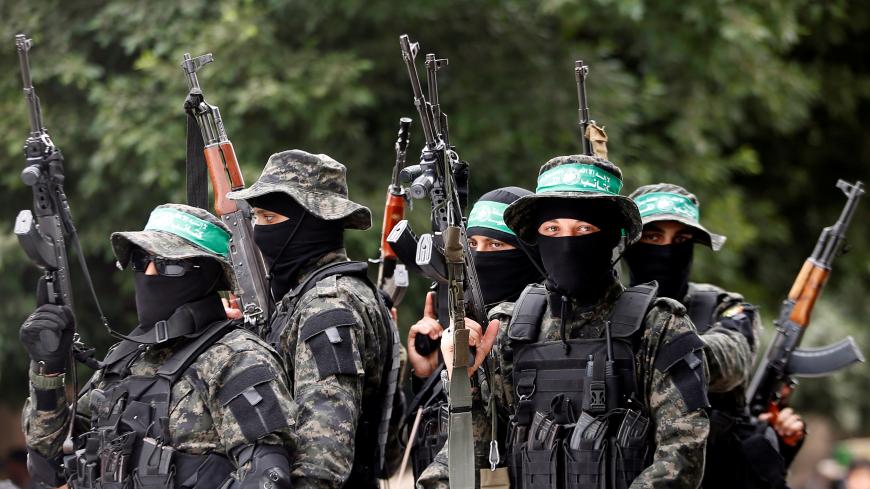 Palestinian Hamas fighters attend the funeral of their comrade Mahmoud al-Qeshawi, who was killed in an explosion, Gaza City, May 6, 2018. - REUTERS/Mohammed Salem

After two long days of fierce clashes between Israel and Palestinian groups in Gaza, the flames began to subside July 15. Hamas and the Islamic Jihad stopped firing their rockets and mortar shells, and Israel halted its aerial attacks. Both sides appeared to have had enough, but Israel nevertheless deployed more Iron Dome missile defense batteries that afternoon, including in the Greater Tel Aviv region. It wanted to send a message to Yahya Sinwar, Hamas' leader in Gaza: Israel is not afraid of a more comprehensive conflict, and the situation could deteriorate into all-out war in a matter of hours.

According to Israeli security sources, the message was intended to make it perfectly clear to Hamas that its assessment of Israel’s intentions was mistaken. “Until now,” a senior Israeli Cabinet minister told Al-Monitor on the condition of anonymity, “Hamas believed that we were too busy on the northern front to risk opening another front along the Gaza border. Well, they were wrong. We do not want a conflict in the south, but we cannot allow the current situation to continue either. If the terrorism from the incendiary kites doesn’t stop, Hamas will find itself at war with Israel, and this time, there is no assurance that their regime in Gaza will continue to exist when the fighting is over.”

To further complicate matters, during the night of July 15-16, two unidentified aircraft attacked a Syrian military base in the Aleppo region, in northern Syria. While Israel has not commented on the attack, it has been attributed to Israel's air force. On the morning of July 16, news agencies reported that the base is also being used by Iran and that nine Iranian and 13 Syrian soldiers were killed in the strike. These events in Gaza and in Syria are indicative of a quiet shift in Israeli policy.

Until now, Israel did everything it could to avoid igniting its southern front, so it could focus its energy and preparedness on the war of attrition with Iran to the north. Now, however, Prime Minister Benjamin Netanyahu and Defense Minister Avigdor Liberman — facing intense pressure from the right in the street and in the Cabinet — are signaling that if they have no other choice, they will fight on both fronts simultaneously. Neither Netanyahu nor Liberman has any desire to juggle two active fronts. They are up to their necks in the north with the effort to expel Iran from Syrian territory. In this regard, they are keeping a close eye on the July 16 meeting in Helsinki between Russian President Vladimir Putin and US President Donald Trump.

That Hamas has managed to incinerate tens of thousands of dunams in an area approaching the size of Tel Aviv is eating away at Netanyahu’s public support and Israelis’ trust in Liberman. A furious clash in the Security Cabinet on July 15 perfectly reflects the situation. Education Minister Naftali Bennett demanded aerial strikes against anyone launching incendiary balloons and kites, challenging the position of the Israel Defense Forces (IDF) chief of staff, Lt. Gen. Gadi Eizenkot, who loudly and clearly stated that such an approach runs counter to his “operational and moral positions.”

Hamas is in a state of near collapse in so many ways, from Gaza’s economic situation to the group's international isolation and declining military strength. Nevertheless, it has managed to surprise Israel over the last few months by striking at its tender underbelly. The current escalation began March 30 with the start of the Great Return March to the border fence and culminated with the Nakba March of May 14, which failed to break through the fence and iron ring that the IDF deployed. That said, despite all the odds, and below the radar of every intelligence assessment, the incendiary kites appeared, followed by helium balloons filled with incendiary agents.

Desperate, Hamas had found the ultimate weapon of the weak. Although the kites and balloons have not (so far) led to a loss of life in Israel, and therefore can't be considered “lethal weapons,” they have set fields, forests, scrub and other swaths of nature on fire. Israelis living near Gaza have been burdened for the past three months contending with heavy clouds of smoke and ash and the smell from the fires, not to mention the occasional incendiary balloon landing in their yard. Go figure how to deal with all this.

The argument between Eizenkot and Bennett, who has the support of other ministers, including Public Security Minister Gilad Erdan of the Likud, signifies a clash between two opposing worldviews. It is a debate between two sides that are right, but only one side is wise.

Bennett is correct in his determination that the people launching the incendiary balloons are terrorists. There is a legal basis for this position, and it has the backing of the state attorney general. Bennett argues that terrorists should be killed before they kill you. Eizenkot is also right in that it would do Israel more harm than good to use an F-16 to fire a half-ton missile, or any other projectile, at a group of people, often teens acting under orders from Hamas, as they release balloons. The difference between Eizenkot and Bennett is that Eizenkot isn’t facing an election next year. Bennett is.

Netanyahu would normally not allow Bennett to take a position to his right, a tactic that leads him to align himself with Bennett’s every whim. Netanyahu now, however, faces a dilemma: Israel’s right-wing electorate wants the fires to stop, no matter the cost.

It took more than 100 days after the first fires before Netanyahu headed to the area surrounding Gaza to meet with local authorities. He kept his distance from the situation for more than three months, trying to avoid being cast in the same frame as what is being described as a Hamas victory over the technological powerhouse that is the IDF. It was as if he had a hard time looking the residents — many of them supporters of the opposition Zionist Camp — squarely in the eye. “If this was happening to the settlers in Judea and Samaria, Netanyahu would pick up and move there,” a source in the Zionist Camp grumbled bitterly to Al-Monitor on condition of anonymity.

Netanyahu is starting to pay a public price for the situation, which is why he decided to up the ante. At the July 15 Cabinet meeting, he ordered the IDF to stop the kites, full stop, no matter the cost.

The Israeli air force has in recent days delivered its most debilitating blows against Hamas since Operation Protective Edge in 2014. On July 15, it targeted and destroyed two tunnels, a base of the Beit Lahia Brigade and a five-story building that served as a Hamas base and training site for urban fighting.

The fighting in the summer of 2014 only came to an end when the IDF began destroying multistory buildings in Gaza’s well-to-do neighborhood, where senior members of Hamas lived. This time, the IDF hopes that Hamas will get the message at the start of the fight. Attacks on July 15 did, in fact, help to restore calm, but the incendiary balloons are still falling on the Israeli side of the border, and public criticism of the prime minister continues. Neither Israel nor Hamas appears to be interested in another round of violence, but they are both heading there at a pace that is too quick for comfort.