The Israel Defense Forces know that the uncovering of a large Hamas terror tunnel does not mean that group would abandon its efforts to attack Israel. 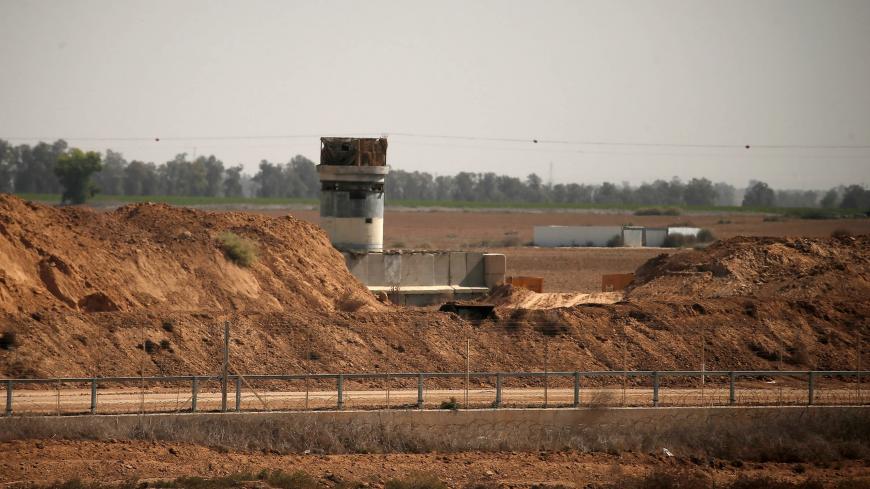 An Israeli observation post at the Gaza-Israel border, east of Khan Yunis in the southern Gaza Strip, Oct. 20, 2020. - MAHMUD HAMS/AFP via Getty Images

This week began with strenuous Israeli military activity all along the border fence with the Gaza Strip, including a troop buildup, Merkava Mark 4 tanks’ deployment and preparation of temporary congregation and parking lots. The IDF also closed off roads to civilian traffic and instructed farm workers to stay away from the fields along the border. Clearly, something was afoot below ground, even as tense calm prevailed above. On Oct. 20, the secret was revealed with an IDF announcement that it had identified a Hamas attack tunnel dug from Gaza stretching a few dozen of meters into Israel. “A very, very significant terror tunnel,” was how IDF Chief Lt. Gen. Aviv Kochavi described it the next day.

The tunnel is not only significant and strategic in nature, it is also the first known dividend of the massive underground barrier that Israel has dug along the Gaza border to a depth of several dozen meters. The “barrier,” as it is dubbed, is a unique and highly complex Israeli innovation designed to put an end to the strategic tunnel weapon developed and used by Hamas in recent years when it realized it would be unable to prevail against the IDF on the ground, in the air or sea. With the recent quasi-completion of the barrier, Hamas has also been deprived of this subterranean military theater.

The new tunnel was discovered by the sophisticated sensor technology mounted on the barrier deep below ground. The wall — at the cost of hundreds of millions of dollars — is equipped with technology to detect movement, drilling and any type of work conducted below ground. The tunnel appears to have been detected on Oct. 18. The next day, powerful drilling equipment was brought in and found the tunnel that had crossed the borderline and came very close to the barrier constructed on the Israeli side. “The most significant tunnel we have seen to date, both in terms of depth and infrastructure,” a senior Israeli military source told Al-Monitor on condition of anonymity.

The IDF has declined to reveal further details, but Hamas is believed to have invested heavily in a deeper and wider tunnel than those it had dug before, equipping it with electricity, phone lines and other means that turned it into a strategic weapon of particularly lethal potential ready to send terrorists into Israel to mount attacks and kidnappings. Hamas employed dozens of laborers working in shifts 24/7 in great secrecy to dig the tunnel. “The damage to Hamas from exposure of this tunnel is substantial,” a senior Israeli security source who spoke on condition of anonymity told Al-Monitor. “Money, energy, work and time that could have been invested in caring for the impoverished residents of Gaza.”

Israel and Hamas are now playing a game of cat and mouse. Hamas has not given up all together on the tunnel idea, but has started preparing alternatives, such as exploding gliders, motor-powered Buckeye parachutes and other means to cross the fence that Israel has built above ground along the border.

At the same time, Hamas continues to examine the weak points and limitations of the barrier. “They will try to dig down to depths where they think the barrier does not reach,” a senior IDF officer told Al-Monitor on condition of anonymity. However, such a solution is not evident. In fact, digging that deep would probably be exceedingly difficult — not to say an impossible undertaking — given the location of the coastal aquifer, Israel’s most significant water reservoir located at relatively low depth in the region.

Nonetheless, both sides realize that the barrier, just like the Iron Dome anti-missile system, provides Israel with an effective defense but not a full-proof one. Just as the Iron Dome interceptors cannot guarantee that all the missiles fired from Gaza at Israel will be headed off, so the barrier is not a totally impenetrable obstacle. The Palestinians will keep trying to find ways to bypass it mostly because they have no other choice.

After the IDF located the tunnel and started examining it, both Hamas and Israel indicated that the incident would not undermine ongoing attempts to arrange a long-term cease-fire between the sides and maintain the calm that has been preserved along the border in recent months. These declarations flew in the face of two rockets fired from Gaza in the evening hours of Oct. 22 toward the town of Ashkelon. One was intercepted by the Iron Dome, the other landed in an uninhabited area. Hours later, Israel’s air force bombed Hamas targets in Gaza, in what has become an almost routine cycle of occasional rocket blasts and retaliation. Nonetheless, both sides know that if even one rocket gets through the interceptor shield and causes Israeli fatalities, all bets are off.

Meanwhile, even as it indirectly negotiates with Israel on a cease-fire Hamas continues to arm itself. Israel continues to follow with great concern the organization’s attempts to improve its military capacity despite being isolated and under siege by both Israel and Egypt. “It is this very fact that encourages the Hamas engineers to keep trying,” another senior Israeli security source told Al-Monitor on condition of anonymity. “Unlike Hezbollah, which gets everything readymade from Iran, Hamas does not have such options and has to go it the hard way.” Israel is closely monitoring new range Hamas rocket trials along the Gaza coast, and continued efforts by the Islamist group to obtain naval capabilities and develop sophisticated explosives capable of breaching the border fence.

At the same time, the IDF continues to fully support efforts to improve Gaza’s economy and develop civilian infrastructure projects. It also advocates an increase in the number of Gazans allowed to work in Israel in a bid to address the enclave’s rampant unemployment — even as it faces a tough dilemma over allowing Qatar to keep providing Hamas with massive cash inflows to ensure its survival. “We know that some of the cement that goes into Gaza [for civilian construction] is used to build tunnels,” the second senior Israeli security source said. “We still do not have proper oversight over this. We know that the tunnel exposed this week is not the last, but we hope that economic improvement in the Gaza Strip will enhance stability. People who work for a living, do not dig tunnels.”