The IDF exposed an attack tunnel dug by Hamas, which reached Israeli territory. 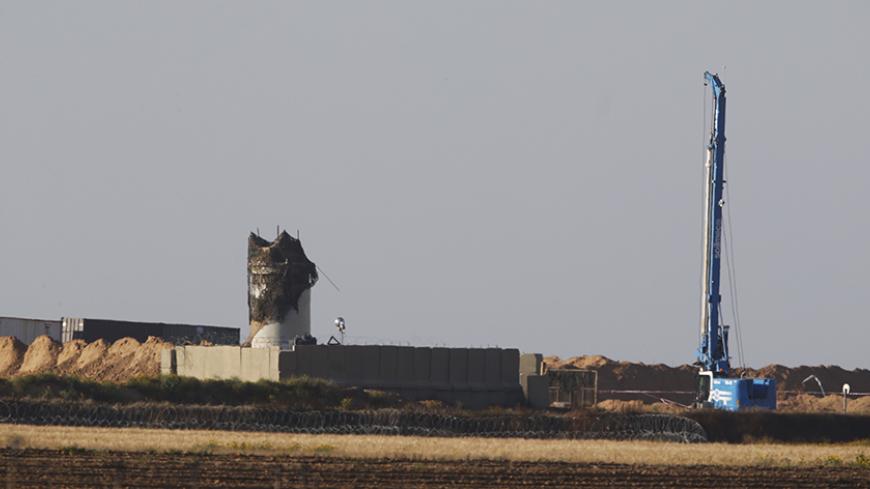 A drill is seen on the Israeli side of the Southern Gaza border where, according to the Israeli army, a tunnel was discovered, Israel, April 18, 2016. - REUTERS/Amir Cohen

Another battle in the “tunnel brain war” being waged in the recent year between Hamas and Israel ended April 18, when Israel removed the gag order from the great drama that had been unfolding on the Gaza Strip border over the last two weeks. During the recent weekend, the entire area was placed under alert. The Palestinians reported heightened activity of the Israel Defense Forces (IDF) along the border of the Strip and an enormous amount of heavy engineering equipment operating in the zone. The IDF concentrated large forces in the region, local residents were ordered to remain alert and rumors spread throughout the length and breadth of the zone, from the Gaza Strip to Israel and back.

On April 18 before noon, the gag order was lifted. News reports were released that the IDF had located, uncovered and neutralized a cross-border Hamas attack tunnel dozen of meters long into Israeli territory in the southern Gaza Strip sector. This was the first tunnel uncovered by Israel since the conclusion of the Protective Edge campaign in the summer of 2014.

Ever since the tunnel was located about two weeks ago, a heavy news blackout was imposed on the entire area. The Israeli media was not allowed to report about it in light of the fact that IDF soldiers had penetrated the tunnel and were working around the clock to neutralize it, including within Palestinian territory. Only after the tunnel was sealed off was the gag order on the story lifted.

This discovery shows the tremendous efforts that Israel is investing in its attempt to solve the tunnel conundrum via innovative Israeli technology. The technology, nicknamed “Iron Dome for tunnels” (in reference to the Iron Dome air defense system), has also been under a severe media ban. In recent months, the Gaza Strip border has been humming with dozens of IDF bulldozers and hundreds of drillers who drilled to a depth of dozens of meters in hundreds of spots the length of the Israel-Gaza Strip border. Israel’s Engineering Corps uses technological tools, and this technological network allows the IDF to pinpoint the location of cross-border attack tunnels that penetrate Israeli territory. Thus far, Israel has invested about 300 million shekels ($80 million) in this technology.

In the current year, quite a number of Hamas tunnels have collapsed while they were being dug. Rumors and urban legends spread throughout the Strip that Israel had developed the ability to blow up tunnels under construction, by “remote control.” All the Israeli spokesmen denied the existence of such a capability, but Defense Minister Moshe Ya’alon made the following statement after the affair was publicized, “In recent months, Hamas has suffered from the collapse of a number of tunnels, many diggers were killed during their work. And now a tunnel has been detected. Nevertheless, we do not delude ourselves that Hamas will draw the lesson and stop dealing with this [i.e., tunnels] … or tend to the welfare of residents there."

Ya’alon’s broad hint reveals a bit of the brain war being waged between Israel and Hamas since the conclusion of Operation Protective Edge. Mohammed al-Deif, commander of Hamas' military wing, is viewed as the “father of the tunnels.” His supreme strategic goal now is the reconstruction of the tunnel network in order to allow Hamas to strike Israel’s homefront by surprise.

Hamas understands that it is decisively outflanked by the IDF in land, sea and air. The only advantage that Deif succeeded in achieving for his fighters is in the subterranean space, where the IDF is not accustomed to fighting and cannot actualize its superiority. That is the reason Hamas invests all its energies in reconstructing the tunnels. Past experience has shown that the only way to bring Israel to its knees is to abduct an Israeli soldier, a la Gilad Shalit, who was captured in 2006 and released in 2011.

In order to carry out such a kidnapping, Hamas needs a tunnel that will penetrate the Israeli homefront and allow its “Nokhba” fighters, Hamas’ elite unit, to carry out a surprise attack on the IDF and drag one or two live Israeli soldiers into the Strip. Israel, on its side, understands the situation and invests all its energies in attempts to neutralize the tunnel challenge.

Simultaneously, acute political struggles are being waged within Hamas, and also among decision-makers in Israel. Amos Gilad, director of the Political-Military Affairs Bureau at Israel's Defense Ministry, said April 13 that there is a conflict in Gaza between two echelons. “The diplomatic echelon [in Gaza] has seniority and priority over the terror echelon,” Gilad said. “But Mohammed Deif couldn’t care less about diplomatic policy, he does what he feels like and all his people follow him accordingly. … Therefore, there are, in effect, two entities [of Hamas in Gaza]. One works with Iran and one works ‘as if’ diplomatically. It conducts negotiations with Egypt and [also] cooperates with Islamic State."

Gilad’s words reveal only the tip of the iceberg of the struggle taking place in Gaza since the conclusion of Protective Edge, between the various Hamas camps. The bottom line is that Deif, who survived an assassination attempt by the IDF toward the end of the Protective Edge campaign, has declared his independence. He no longer obeys directives of Hamas’ internal political entity — senior Hamas leader Ismail Haniyeh — or the external diplomatic entity in the form of Khaled Meshaal, head of Hamas' political bureau.

Hamas’ military wing, which faces competition from quite a number of Salafist organizations and Islamic State sources for popularity among the Palestinian rank and file, makes its own agenda. “Even though Hamas understands that it cannot allow itself another round of fighting against Israel at the current stage,” a high-ranking Israeli intelligence source told Al-Monitor on the condition of anonymity, “the military wing is capable of anything, including a comprehensive, surprise escalation vis-a-vis Israel and another round [of fighting] even in the foreseeable future.”

Things have been getting even clearer, as Deif now realizes that Israel is on the verge of a technological breakthrough that will neutralize the tunnel threat. He invested all the resources of the organization in tunnel digging and employed hundreds of diggers at a time when Hamas is barely able to pay salaries to its people. “Again, he finds himself with his back to the wall,” an Israeli senior defense source told Al-Monitor on condition of anonymity. He and his colleagues worry that Deif and his deputy, Mohammed Sanwar, are racing toward the Iranians.

Within Israel, one old argument is heating up again. This is the one between Knesset member and head of Yisrael Beitenu Party Avigdor Liberman from the opposition and Education Minister Naftali Bennett from the coalition versus Prime Minister Benjamin Netanyahu, Defense Minister Moshe Ya’alon and the entire military establishment. Immediately after the tunnel discovery was publicized, Bennett said that this constituted an offense on Israel’s sovereignty that justifies any response. And Liberman has been demanding for quite some time that the Hamas regime in Gaza should be brought down and terror should be routed.

For the time being, Netanyahu and Ya’alon’s approach has been winning out, but unrest within the Israeli public continues. The summer of 2016 is approaching, and no one — not in Israel and probably not in Gaza either — wants to return to the summer of 2014.