The Israel Defense Forces destroyed a Gaza tunnel this week as a signal and warning to Hamas not to open a new intifada against Israel. 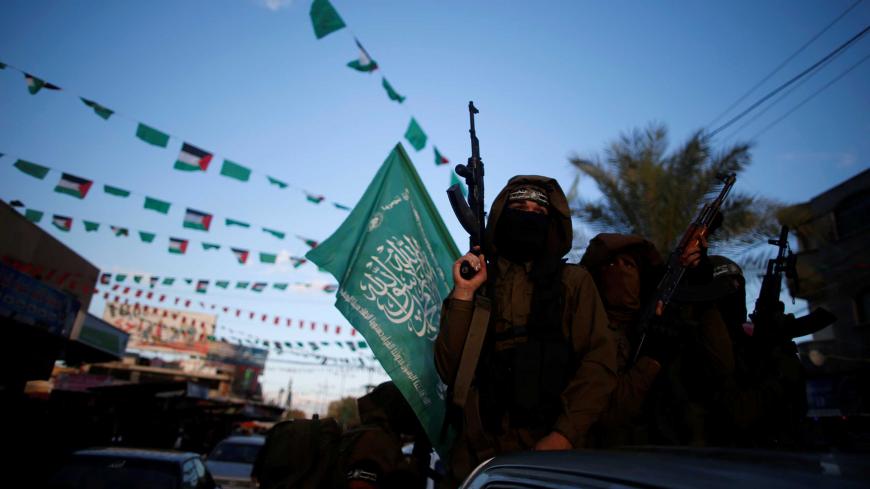 Palestinian Hamas militants take part in a protest against US President Donald Trump's decision to recognize Jerusalem as the capital of Israel, in the northern Gaza Strip, Dec. 7, 2017. - REUTERS/Mohammed Salem

On the night between Dec. 9 and Dec. 10, the Israel Defense Forces (IDF) destroyed a cross-border underground Hamas tunnel that penetrated hundreds of meters into Israeli territory from the Gaza Strip. A month and a half ago, on Oct. 31, the IDF had destroyed another tunnel from the Strip that crossed the border into the area of Kibbutz Kissufim in Israel. In the explosion in this tunnel, at least 12 members of Islamic Jihad were trapped and killed. Five bodies extracted from the tunnel are being held by Israel as a bargaining chip for future negotiations.

The IDF presented the discovery of the second tunnel as the fruit of its new technological and operational abilities. However, this tunnel (which was blown up this week) had been known to the security apparatus months ago. It was discretely destroyed without the Israeli threats and rhetoric that accompanied the blowing up of the earlier tunnel. The difference between the two tunnels is that the first constituted a present and immediate danger to Israel, while the second tunnel — which was found in an open agricultural terrain in Israel that is relatively distant from the settled localities — was set aside as a bargaining chip with which to threaten Hamas.

IDF spokesman Brig. Gen. Ronen Manelis explained in his announcement that “the large tunnel that was uncovered and destroyed was dug by Hamas. It extended from Khan Yunis in the center of the Strip and penetrated into Israeli territory for hundreds of meters. It was uncovered in the middle of an agricultural plot of land, about a kilometer (0.6 mile) from the nearby localities of Nirim and Ein Hashlosha. The IDF tracked the construction of the tunnel over recent months and decided to neutralize it this morning.”

The Islamic Jihad tunnel in the environs of Kissufim was destroyed immediately after it was discovered. It was felt that the residents of the south were directly endangered by the tunnel, in which Islamic Jihad fighters were actively operating and training. The IDF felt that it had to destroy the tunnel immediately, despite the risk that rockets would be fired at Israel afterward in retaliation. By contrast, the demolition of the second tunnel this week was intended to send a warning message to Hamas: We know about your tunnels, so think twice before you decide to heat up the zone in response to US President Donald Trump’s announcement that Jerusalem is the capital of Israel.

Southern Command Chief Maj. Gen. Eyal Zamir told journalists that the uncovering of the tunnel was made possible thanks to the IDF’s advanced technological equipment and methods. His words were designed to allay the fears of the Israeli public, which views the cross-border tunnels from Gaza as a severe security failure since those tunnels were only uncovered in the Operation Protective Edge campaign of summer 2014. However, Zamir’s statement was mainly targeted at Hamas’ military and political leadership. “With the integration of advanced, ground-breaking technology, we operate a wide range of abilities and methods, both visible and hidden, above and below ground, to thwart the tunnel project of Hamas and other terror organizations in Gaza,” Zamir stated. Prime Minister Benjamin Netanyahu also spoke about this issue. In his visit to Paris on Dec. 10, he said, “We are developing ground-breaking technologies that do not exist [anywhere else] in the world. We will continue in our efforts. We are on the right path.”

An Israeli security source verified in a conversation with Al-Monitor that the demolition of the tunnel was timed to constitute a warning message to Hamas. On the heels of President Donald Trump’s declaration on Dec. 6, head of Hamas political bureau Ismail Haniyeh called for a new intifada. Haniyeh encouraged Palestinians in Gaza and the West Bank to rise up and instigate clashes with the IDF. Hamas even allowed hundreds of demonstrators from Gaza to come close to the border fence with Israel and confront the IDF. As a result, two Palestinians were killed Dec. 8 and dozens were wounded. Simultaneously, rockets were fired the same day toward the Israeli town of Sderot; one of them blew up in the city.

Israel’s security apparatus assumes that Hamas is interested in an escalation at this point in time due to internal Palestinian considerations. Israel thinks that the heads of Hamas want to emphasize the failure of Palestinian President Mahmoud Abbas’ nonviolent diplomatic path with regard to the American declaration regarding Jerusalem. In addition, a clash with Israel will strengthen the belief that there is a vital need for armed Palestinian organizations, and despite Abbas’ demand, these armed units cannot be dismantled in any intra-Palestinian settlement.

This is the reason that Coordinator of Government Activities in the Territories Major Gen. Yoav (Poli) Mordechai recently sent two warning messages to Hamas and the Gaza residents. “The continuation of rocket-fire incidents will lead to a harsh and painful response by the IDF,” Mordechai threatened Hamas, adding, “Do not try to test our resolve.” To Gaza residents, he wrote, “Irresponsible terrorists are leading you to an escalation [of the conflict] right before winter, [in the time] when the hardships in Gaza increase. Hamas bears responsibility for the Strip. Wake up, because time is not on your side.”

Thus, none of Mordechai’s warnings were directed at the Palestinian security apparatus in the West Bank. The Israeli defense establishment assumes that despite the tight spot that Abbas now finds himself in, he will do everything in his power to avert an eruption of violence from West Bank residents that could threaten his regime as well. Instead, he will continue to try and reach a diplomatic solution even without American mediation. This assumption is partly based on the words of Palestinian Foreign Minister Riyad al-Maliki, who said on Dec. 9, “We will look for a new mediator among our Arab brothers and other international community members, a mediator who will help us forge a two-state solution.”

Over the weekend, Israel saw that the stormy demonstrations that broke out in the West Bank were fully controlled by the Palestinian Authority’s (PA's) security forces. These forces made efforts to curb Hamas’ calls for an intifada, while simultaneously allowing the residents to “blow off steam.” Evidently, Palestinian leadership did not want Abbas to come across as a “loser” to his people.

Therefore, Israel directed most of its messages toward Hamas and not the PA. The destruction of the tunnel was designed to make it clear to Hamas that its flagship project, the underground tunnels, is doomed to failure in spite of the tremendous resources that were invested in it. Without tunnels — and when Iron Dome anti-missile defense batteries significantly neutralize the threat of rockets on the south — Hamas' leadership ought to think long and hard. They should consider whether military escalation benefits them or whether it will lead to their downfall.