IDF officers are concerned that poverty, unemployment and an internal power struggle within Hamas might push the movement into a new military conflict with Israel. 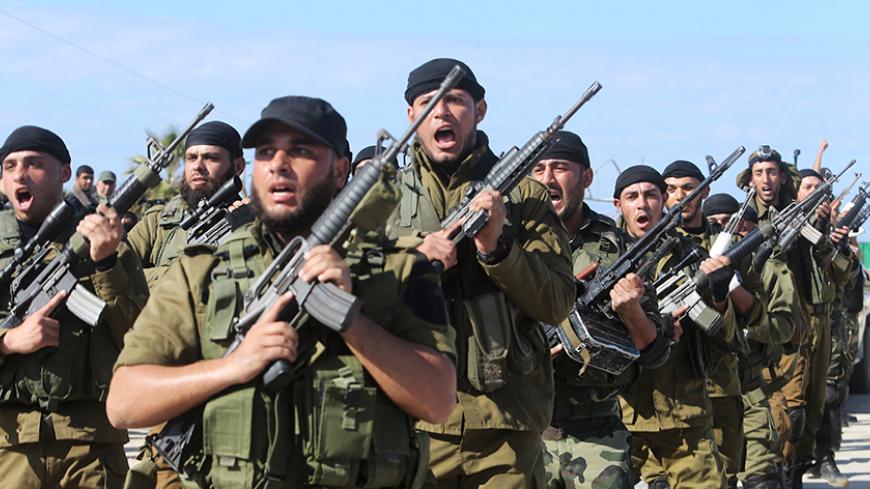 Passover this year, in April, passed almost without incident for the Israel Defense Forces (IDF) Southern Command and residents of southern Israel. Concerns about mutual military escalations and miscalculations between Israel and Hamas came to naught.

Israel and Hamas-ruled Gaza confronted each other in 2008 (Operation Cast Lead), 2012 (Operation Pillar of Defense) and 2014 (Operation Protective Edge). The Southern Command’s working assumption is that there will be another round in the coming years. The IDF and Shin Bet are trying to understand which way the wind is blowing in Gaza and map in advance Hamas' plans and preparations for the next round. The IDF is also determined to conclude that round faster than previous confrontations and score a decisive victory. In the 2014 war, the IDF trudged around for 51 long days until a cease-fire took effect.

The battlefield is more complicated than ever. Hamas is divided, between its military and political branches, which are bickering with increasing intensity. The diplomatic branch is trying, unsuccessfully, to work its way into Egypt’s good graces, but the Egyptians are demanding that Hamas turn over Islamic State (IS) collaborators, while the military brass refuses.

Mohammed al-Deif, commander of the military wing, knows that IS' Sinai District (formerly Ansar Bait al-Maqdis) is the last ammunitions pipeline Hamas has these days. The besieged heads of Hamas’ military wing have been appealing to Iran for help. The three of them — Deif, his deputy, Marwan Issa, and strongman Yahya Sanwar — are trying to drag the diplomatic branch to “go the extra mile” in Tehran's direction, but Khaled Meshaal, Hamas' political bureau chief, has hesitated. Given the heavy pressure he comes under from Sunni countries, Meshaal can’t afford to be seen joining up with the Shiites in Tehran.

This situation has created a real struggle between Hamas’ political and military branches. Old goblins are escaping the bottle. As pressure increases in Gaza — with worsening unemployment and deepening poverty — tempers tend to rise even higher. Military-wing officials blame the political wing for the failure against Operation Protective Edge. According to them, the military wing scored historic successes, paralyzed Israel for 51 days, closed down Ben Gurion International Airport for two days and survived the mighty IDF, while the political wing revealed itself unable to turn military success into a diplomatic victory. That the Gaza blockade was not breached and that Hamas did not succeed in strengthening its position are perceived by military-wing officials as complete failures on the part of the diplomatic leadership.

This discord is set against a background of acute unemployment. According to the World Bank, in 2015, 43% of the manpower in Gaza was not working. A full 60% of youths were unemployed, and 90% of the water reservoirs were contaminated, the water unsuitable for drinking. There was no electricity 50% of the time. The Rafah crossing connecting Gaza to Egypt is behind lock and key. The only remaining lifelines are the border crossings into Israel, at Erez and Kerem Shalom. Eight hundred trucks a day arriving from Israel keep Gaza residents' heads above water.

Despite all the above, experts in the IDF presume that there is no alternative to Hamas in Gaza. Support for IS is estimated at about 10%, a relatively low figure. The connection between Hamas’ military branch and the Sinai District has been weakened a bit recently under Egyptian pressure. Egyptian President Abdel Fattah al-Sisi views the battle being currently waged in the Sinai Peninsula against IS as a critical battle over Egypt itself.

According to an Israeli security source, data that has reached the West indicate that the Egyptian army is losing between 20 to 50 soldiers a week in a non-stop war against some 600 to 1,000 IS fighters. The Egyptians’ problems are as follows: the fighting is occurring over a very large, isolated and mountainous area; IS possesses advanced combat weaponry; and IS fighters are not afraid of dying due to their religious, messianic zealotry. Hamas observes this struggle with mixed feelings. On the one hand, Egypt is a bitter enemy, but on the other, an IS takeover of Sinai could spill over into the Gaza Strip.

According to the Southern Command's situation evaluation, Hamas is currently deterred and restrained vis-a-vis Israel. The few rockets that have been fired since Operation Protective Edge into Israeli territory — an IDF source estimates 78 rockets over almost two years, 38 of which fell into Gaza — were launched by insubordinate Salafist organizations. Hamas has created a special force that tries to prevent such attacks.

Hamas is well aware that it is not at the moment prepared for another military round against Israel, but it nevertheless takes into account that fighting could erupt. The organization keeps close tabs on Israeli publications and statements. Every utterance by a defense or diplomatic source is taken extremely seriously. There are some in Hamas who think that Israel is planning a “surprise attack” similar to 2008 and 2012.

In this chaos, the most prominent figure is that of Sanwar, the “minister of works,” as Israeli sources call him. Sanwar is the most dominant of the figures constituting the military wing's triumvirate. He is militant, self-confident and straining at the leash looking for a good fight. He has no regard for Meshaal and the rest of the political leadership, who fear that Sanwar might drag Hamas into an unplanned war with Israel.

Sanwar spent 20 years in prison in Israel, for murdering collaborators, before being released in the 2011 deal to free IDF soldier Gilad Shalit. He has since risen to the top. In the current state of affairs, the Israelis view Deif as the saner alternative to Sanwar.

“One thing is certain,” a highly placed Israeli security official told Al-Monitor. “If things continue [in this direction] at the current pace, there is no doubt that in the next two years, an additional, powerful round of violence will take place between Israel and the Gaza Strip. We’re talking about a bubbling pressure cooker that continues to boil powerfully. To lower the pressure, someone has to lower the height of the flames or remove the cover.”

At this stage, there is no responsible adult to undertake such an action. As reported by Al-Monitor, the upper echelons of Israel's military establishment believe that Gaza should be opened: tens of thousands of Palestinian workers should be allowed to enter Israel; economic and developmental enterprises should be initiated (e.g., a floating sea port, artificial islands); and everything should be done to improve the quality of life there and to open horizons for its residents. If that doesn't happen, the IDF's top brass say, we won’t be able to avoid another round of war. Such are the laws of nature.