With Hamas’ military commander Mohammed al-Deif suffering from multiple injuries, Yahya Sinwar has been elected the overall leader of Hamas in the Gaza Strip. 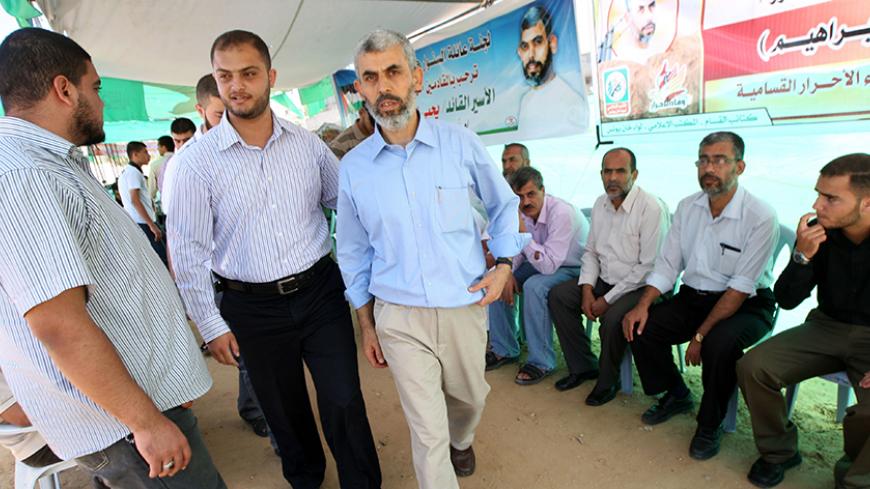 Even as reports were emerging of Yahya Sinwar’s Feb. 13 election to replace Ismail Haniyeh as the leader of Hamas in the Gaza Strip, other reports from Gaza are pointing to a significant decline in the health of Mohammed al-Deif, the commander of the movement’s military wing. Some Gaza sources even claim he is at death’s door.

Deif is considered a living legend for surviving all Israeli attempts on his life. The top of Israel’s most wanted list was injured in September 2002, during the second Palestinian intifada, when two missiles fired from an Israel Defense Forces (IDF) helicopter hit a car in which he was traveling on Salah al-Din Street in Gaza City. Deif was severely injured, sustaining head wounds and face burns, and lost his sight in one eye. He underwent complex treatments by doctors sent from Egypt to Gaza and survived.

Deif survived another assassination attempt in July 2006, when the IDF attacked a house where he was staying. Once again, he was seriously hurt, forced to undergo a series of orthopedic treatments and vacate his position as head of the Hamas military wing. Command of the Izz ad-Din al-Qassam Brigades was handed over to Ahmed Jabari, who was subsequently killed by Israel in November 2012 on the eve of its Operation Pillar of Defense in the Gaza Strip.

Deif was once again called to take charge despite his serious disabilities, the fierce headaches from which he suffered and the daily use of painkillers in order to keep going. During Operation Protective Edge, in August 2014, another attempt was made to take him out, when an Israeli aircraft fired a missile at a house in which he was staying with one of his wives and two of his children. The wife and the children were killed in the attack. Deif survived, once more.

Over time, each injury he sustained only added to Deif’s glory and to the belief in his immortality and protection by Allah. Even after Operation Protective Edge, and despite his declining health, he is still considered the dominant figure of the Hamas military wing. But according to sources in the Gaza Strip, he is gradually growing weaker. Deif can no longer carry out the demanding tasks of a military leader. According to a reliable source in Gaza, who spoke to Al-Monitor on condition of anonymity, in recent months Deif has been suffering memory lapses or, as the source described it, “blurred thinking,” probably the result of the head injuries he sustained in the attempted assassination in 2002.

Sinwar, who was freed by Israel as part of the 2011 deal for the return of Israeli soldier Gilad Shalit, was the most senior Palestinian prisoner released. His release was obtained at the insistence of his brother, Mohammed Sinwar, the commander of the Khan Yunis Division of Hamas and one of the few people who knew where Shalit was being held captive. At the time, Mohammed Sinwar made the deal for Shalit’s exchange conditional on freedom for his brother, among other Palestinian prisoners. When the released Hamas prisoners arrived at the Rafah crossing in Gaza, a black Mercedes awaited senior prisoner Sinwar. He was picked up by commanders of the military wing as befits a commander in chief back from the wars.

Yahya Sinwar identified the vacuum in the leadership of the military wing as a result of Deif’s partial incapacity, and paved his way wisely to the top. He knew how to take advantage of the title he had been given — “liaison between the military and political wing” — the real meaning of which was the de facto head of the military wing. Deif still holds the title of commander in name, by virtue of his past glory.

Sinwar’s election to lead Hamas in Gaza created a sea change within the movement, blurring the line maintained since its inception between its political and military wings. The process of electing Hamas’ new leadership is still ongoing and will be completed once Haniyeh is elected as the chief of Hamas' political bureau (instead of Khaled Meshaal). The election of Sinwar as Hamas’ leader in Gaza is part of this process. Deif continues to carry the title of Hamas military branch chief. Nobody will take this title away from him, as long as he is alive. But in view of his medical condition, Sinwar will be the one de facto ruling directly also over the military branch, having been one of its founders.

One of the heads of the Fatah movement in Gaza told Al-Monitor that merging the two positions could benefit Hamas and the Gaza Strip as a whole. Ever since Hamas overthrew Fatah and took power in June 2007, the heads of the military wing — Deif, Jabari, Issa and others — intimidated the heads of the political leadership. Jabari and Deif used to “straighten out” and “bend” the political leaders to their will, forcing Hamas seniors Haniyeh and Meshaal to dance to their tunes and to heed the threat of their weapons. Now, there is one leader wielding all the power, who is expected to rule ruthlessly.

In his appointment as the leader of Hamas in Gaza, Sinwar assumes responsibility for the movement’s political, diplomatic and military activities, and will no longer have to hide behind the gradually disappearing Deif. Israeli defense officials share this assessment. They see this as an inevitable stage in the development of Hamas.

It is hard to say how long Deif will continue to retain the military commander’s title. But, as mentioned previously, another inspiring figure is already emerging from the wings: Yahya Sinwar, sentenced to three life terms in an Israeli jail but released, and chosen this week to lead Hamas in the Gaza Strip.