Ismail Haniyeh knows that even if he is elected as the head of Hamas’ political bureau, the military wing will be the one that rules Hamas. 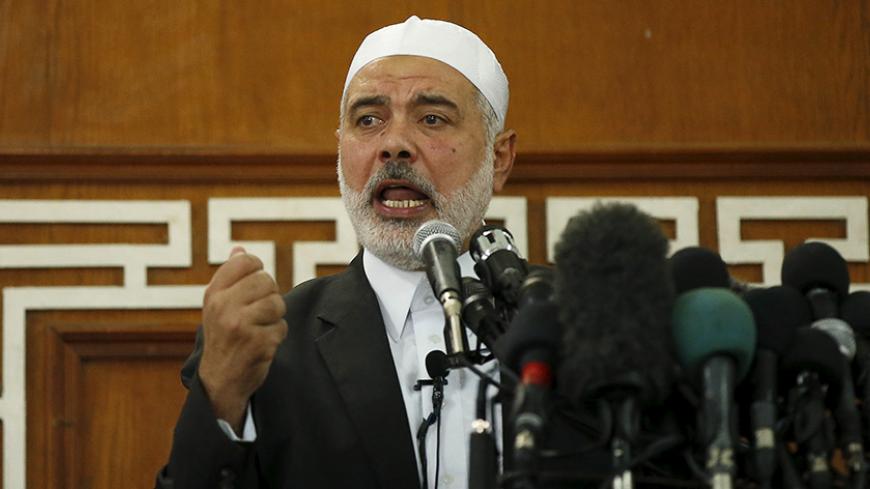 Senior Hamas leader Ismail Haniyeh is expected to return to Gaza in the near future — about five months after he left the Gaza Strip with most of the members of his family for Qatar. He will be coming back to keep a close eye on the election process for the Shura Council, the highest council of the movement and the one that determines its policy. It is the Shura Council that elects the political bureau members and the leader of the movement. Haniyeh is the leading candidate to replace Hamas political bureau head Khaled Meshaal, who announced last summer that he would not run for leadership of the movement but would continue to remain a foot soldier in its ranks. Meshaal understands that Izz ad-Din al-Qassam Brigades, Hamas’ military wing, opposes the continuation of his tenure, and it would be impossible for him to be re-elected with such a determined opposition.

The elections for the Shura Council are confidential. The number of candidates, their identity and the voting process are all secret; even the number of delegates is well-guarded. This is because of their concern that Israel will try to harm those involved.

Haniyeh left the Strip and moved to Qatar because he believed that he could gain control over the West Bank and Gaza voters only if he were outside of besieged Gaza. Then, he thought, he’d overcome all the obstacles on the path to the hoped-for appointment to head the Hamas movement.

Haniyeh, who had been the armor-bearer of the movement’s founder, Sheikh Ahmed Yassin, was convinced that his appointment would be a no-brainer. He was sure that he would be Meshaal’s successor, in effect Yassin’s natural heir. Both Yassin and Haniyeh hail from the Shati refugee camp, and both are the movement’s own flesh and blood. More so, Haniyeh lived most of his life in the Strip, while Meshaal lived many years outside the territories. Meshaal visited Gaza only once, after 2012’s Operation Pillar of Defense, when he assumed the stance of the winner and announced that he would run again for leadership of the movement — contradicting an earlier statement he made of intentions to leave the race. Then, with the support of Ahmed Jabari, the military commander of Hamas, Meshaal won another term of office, but just barely.

Most of the movement’s leaders are now convinced that it was a bad bargain and that Meshaal caused Hamas’ deterioration. Thus they feel that what Hamas needs today is vigorous, energetic leadership to bail the movement out of its current deep crisis.

Haniyeh did not take into account that he’d have to face internal opposition as well. He didn’t understand that he’d have to pass through the same gates of hell that Meshaal had traversed to win the support of the military wing. It turns out that the path to leadership of the movement runs through the attack tunnels of Gaza — the center of al-Qassam Brigades. In order to be the leader of Hamas, even the support of Hamas’ military wing commander Mohammed al-Deif is not enough. One also has to pay politically to satisfy the senior members of the military wing.

According to details given to Al-Monitor, it seems that a severe dispute erupted between the political and military wings during the preparations for the Shura Council elections. The military wing presented a “demand list” that it insisted must be met before Haniyeh could be crowned. According to reliable sources in Gaza, senior members of al-Qassam Brigades demanded extensive representation in the Shura Council. They also insisted that every important future decision, such as the establishment of a unity government with the Palestinian Authority, must also be approved by the military leadership. And in addition, the military wing demanded that places must be reserved for its representatives in the political/diplomatic leadership. This, in total, gives the military wing full control of the movement. In this way, any Hamas leader — whether Haniyeh or Hamas senior leader Mousa Abu Marzouk — would become a mere rubber stamp for resolutions accepted by Deif or other military-wing officials.

The results of the Shura Council elections were to be publicized in the middle of December 2016, but were postponed. It is not clear whether the election process has indeed ended or whether it was halted prematurely; the news tidbits are contradictory. One source in the Gaza Strip told Al-Monitor that the elections were halted in the first stage; another source from the Hamas movement said in a conversation with Al-Monitor that the voters actually voted and there were results. However, a bitter argument is being waged over the final composition of the list, even though it is clear that Haniyeh was elected as Hamas leader.

But one thing, it seems, is clear: Haniyeh (assuming that he was or will be elected) will be constrained and forced to remain within the lines delineated for him by the military wing. The leader of the Hamas movement has become the executor of Deif’s quirks and wishes. Meshaal experienced this personally.

Over the years, Haniyeh learned the limitations of power of the political leadership and the fact that the military wing tops the power pyramid in the Strip. Hamas has no constitution and no governmental checks and balances. Instead, chaos reigns. The reality is that the one who holds the weapons is the one who has the power to dictate policy. Thus, the political leader must be very attentive to the desires of the military wing.

Before coming back to the Strip, Haniyeh is expected to hold a series of meetings in Cairo with top Egyptian intelligence officials. There, he will affirm that his movement has no connection with the jihadi terror elements in the Sinai Peninsula. Haniyeh will, of course, profess to be speaking for the military wing as well, even though he has no de facto control over them. After he comes to Gaza, Haniyeh’s negotiations with the military wing will commence, until we see white smoke. But his options are limited. If Haniyeh wants to lead Hamas, he must close ranks with the military wing and accept Dief’s dictates. Otherwise, he’ll find himself left out in the cold.

The question is: What kind of political leadership can it be when its elected leader serves as a mere rubber stamp while the other side holds a proverbial gun to his head? This question becomes even more compelling in light of the fact that Palestinian President Mahmoud Abbas agreed on Jan. 18, at the end of a discussion marathon in Moscow, to establish a unity government with Hamas. And Abbas certainly knows that it is al-Qassam Brigades that run the roost in Gaza, while the political leadership only serves as a fig leaf.