The cease-fire between Israel and Hamas signals the opening of a great battle over the movement's leadership, between Hamas political bureau chief Khaled Meshaal in Qatar and Gaza leaders such as Mahmoud al-Zahar. 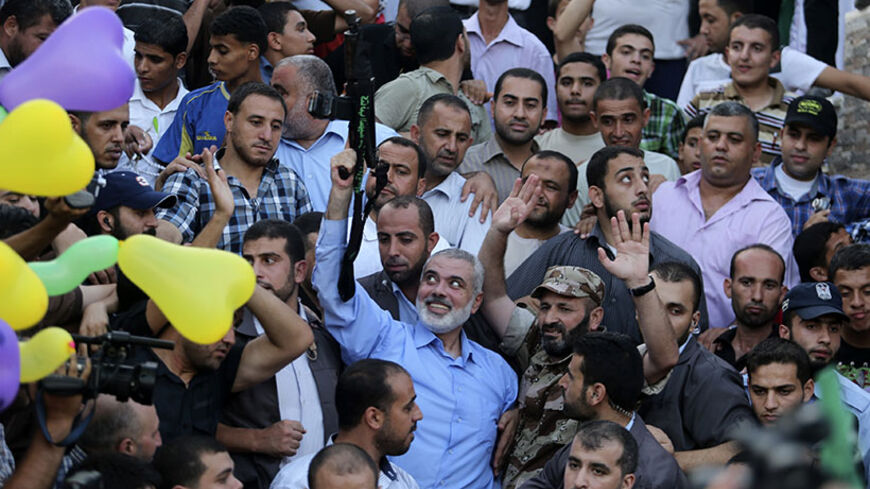 Hamas Gaza leader Ismail Haniyeh appears for the first time since the start of the conflict during a rally in Gaza City, Aug. 27, 2014. -

Shortly after the cease-fire between Hamas and Israel came into force on Aug. 26, Mahmoud al-Zahar left his hideaway and began a motorized victory parade through the streets of the Gaza Strip. Hundreds of Gazans cheered him on, pushed their way to the car that drove him and reached out to shake his hand. He smiled and looked content.

Zahar is a surgeon by profession and one of Hamas’ most scathing and sophisticated leaders. He knows that now that the great war with Israel has ended, the great battle begins for the movement's leadership and for the control of its key centers of influence. Therefore, even before the dust on the Gaza war had settled, Zahar hurried to leave his hideout (under Shifa Hospital?) to reap the fruits of victory. In other words, to return to Hamas’ center of action from which he had been suspended less than three years ago.

Khaled Meshaal, Hamas' political bureau chief, is viewed as Zahar’s political archrival. Meshaal waged a war of titans against him and made sure that Zahar would not be elected to the Shura Council (the movement’s highest body); in effect, Meshaal stripped Zahar of all the key roles he had held in the past. But Zahar, also a political wolf, did not give up or surrender. He made good use of the connections he had created over the years with the regime in Iran, and was basically the only person in Hamas who obtained monetary grants from Tehran. These were funneled to the movement’s military wing. Thus, by virtue of Iranian money and the years he had served as a tough, nonpragmatic leader in his movement, Zahar succeeded in keeping close ties and influence over the heads of the military wing (the Izz ad-Din al-Qassam Brigades). They needed financial resources after all other monetary sources had dried up and evaporated.

Hamas is a movement with many control centers. While the Gaza leadership waged a bitter, behind-the-scenes battle against movement head Khaled Meshaal, the latter viewed the Protective Edge campaign as a rare opportunity to shore up his position that had weakened over the years. In the past, Meshaal had already sensed that he had reached the end of the road in the movement. In January 2012, when he felt that opposition to his leadership was growing, Meshaal announced his resignation and said that he would no longer offer his candidacy to the Shura Council. “I will be a faithful soldier in Hamas, but I will no longer lead,” he stated at the time.

But Operation Pillar of Defense brought Meshaal back into the picture. At the operation’s conclusion in December 2012, he went to Gaza to deliver his victory speech and there, on the giant stage, he again was filled with the desire to run for leadership and crush his opponents.

But ever since he was re-elected, Meshaal has succeeded in bringing Hamas to its lowest point in its history due to a series of erroneous decisions he made. That is the reason that his influence has declined and that pockets of resistance to him in the Gaza Strip have increased. Meshaal no longer warranted the job that had been tailor-made for him as head of the political bureau and the main person in charge of raising money, because money no longer flowed freely as it had in the past.

But the Protective Edge campaign returned Meshaal to center stage, just as Pillar of Defense had done in the past. Meshaal gave smug interviews to the international media, took responsibility for the murder of the youths in the Etzion settlement bloc (June 12), and talked with great pathos about the historical role of the “resistance” in Gaza. Meshaal refused to listen to the movement’s leaders in Gaza who felt that each additional day of combat meant another day of destruction in the Gaza Strip, and that a compromise and an honorable exit must be reached. Instead, Meshaal encouraged Hamas military leader Mohammed al-Deif to continue fighting.

On Aug. 26, the Israeli air force began to destroy Gaza’s high-rise buildings. The message was clear: If Meshaal will continue to be obstinate, Gaza will continue to be demolished. As it turned out, the “falling tower” phenomenon exerted tremendous pressure on the Hamas leadership in Gaza to be flexible. As aforesaid, they had long been ready to accept the Egyptian initiative and vague promises for future discussions about a seaport and airport. The point was to end the campaign and get out alive.

The Protective Edge campaign sharpened the great tension between Gaza leadership living in the Gaza Strip and Meshaal. From his residence in Qatar, Meshaal tried to restore the prestige and power that he had lost over the years. It is doubtful that the current alignment formed in Gaza against him will allow him to retain his former status.

Pressure on Meshaal only bore fruit when former Hamas Prime Minister Ismail Haniyeh took the unusual step of announcing dramatic progress in the Cairo negotiations. Another of Meshaal’s political enemies, Mousa Abu Marzouk, joined Haniyeh. Both of them tried to force the recalcitrant leader in Qatar to accept the Egyptian outline, and made it clear to Meshaal that if he continued to insist on having his way, he would have to bear the consequences. While Meshaal came to Gaza via the Rafah crossing after the Pillar of Defense operation to take part in the victory parade, it was doubtful whether he would now set foot in ruined Gaza. A significant part of the responsibility for the city’s destruction rests on his shoulders.

The Protective Edge operation will be recorded as an important, dramatic turning point in the life of the movement. Hamas has been extricated from the rock-bottom depths to which it had descended, and has reached a position allowing it to perpetuate its regime for many years. Haniyeh, Zahar and even Meshaal all hold the organization’s military wing in high esteem and especially its head, Mohammed al-Deif of the seven lives.

“We are very close to achieving diplomatic understandings that will stand in accordance with our people's steadfast position and befit the conduct of the 'resistance,'” Haniyeh said in an Aug. 26 speech intended to pressure Meshaal to compromise on the “understandings.” In other words, the halo of success he naturally accorded to the “resistance” that promised to remove the blockade and carried out its promise.

Much has been written about the military wing of Hamas. Over the years, it has come to resemble the golem (a robotic creature in traditional Jewish folklore) that turned against its creator. Deif will continue to be revered as a legend by the Palestinians and, assuming he is alive and active, Deif is the man who still calls the shots. If he so desires, a cease-fire with Israel will endure. If not, the “understandings” will collapse in a flash.