Hamas is not interested in a war with Israel, despite the attack tunnel recently discovered by the Israel Defense Forces. 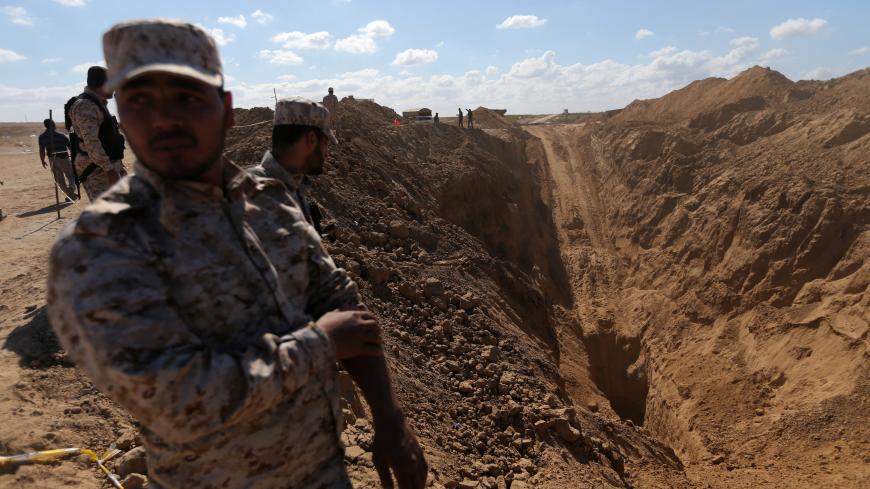 Members of Palestinian security forces loyal to Hamas stand while searching for missing or dead militants after Israel blew up a cross-border tunnel, in Khan Yunis in the southern Gaza Strip, Nov. 3, 2017. - REUTERS/Ibraheem Abu Mustafa

On July 8, the fifth anniversary of the outbreak of the Israeli-Hamas war codenamed Operation Protective Edge, the Israel Defense Forces (IDF) uncovered yet another tunnel the organization had dug from the southern Gaza Strip into Israel. Crews building a subterranean barrier along the Gaza border located the tunnel when they were pouring concrete and reinforcing it with iron rods dozens of meters below ground. The barrier is designed to make it virtually impossible for Hamas to dig tunnels into Israel, although it is not foolproof, given that Hamas has proven its ingenuity in overcoming engineering obstacles on the Gaza-Egypt border, successfully digging hundreds of smuggling tunnels into the enclave despite Israeli-installed steel castings.

The depth of the Israeli barrier, which includes advanced technological systems, will make it difficult for Hamas to dig under and would require complex engineering solutions, given the lack of oxygen and weight of the earth involved. The IDF has completed about half of the barrier so far.

This was the 18th Hamas tunnel Israel has exposed in recent years. In the latest round of fighting with Hamas on May 4, Israel bombed a 20-meter-deep Islamic Jihad tunnel, which had several entrance and exit points. In October 2018, the IDF destroyed a kilometer-long attack tunnel that infiltrated 200 meters into Israeli territory and included power and phone lines.

Since the IDF began using advanced technology to unearth the terror tunnels, Hamas has abandoned its flagship project in which it had invested millions of dollars. Even if some undetected tunnels remain, as far as Israel knows they are inactive and Hamas would have a hard time using them and overcoming the new Israeli barrier.

The Hamas decision to forgo its tunnel enterprise has significant implications for the military doctrine of the organization’s armed wing and the movement’s diplomatic path.

Contrary to popular opinion in Israel, Hamas did not start its tunnel project as an offensive measure, but rather as a defensive one. The decision to embark on the tunnel construction followed a round of fighting with Israel in late 2008 and early 2009, known as Operation Cast Lead, during which Israel sent tanks and armored vehicles into the enclave. The fighters from Hamas' military wing, the Izz ad-Din al-Qassam Brigades, had no way of confronting them, despite being trained in armed combat in urban areas. Their only option was to flee to the major towns, especially Gaza City, where Hamas institutions are located. Their mission there was to try to prevent Israel from capturing the towns and toppling Hamas from power. However, the IDF was under orders to stay out of the towns by then-Prime Minister Ehud Olmert and Defense Minister Ehud Barak, who did not want the Hamas regime toppled and only sought to enhance Israel’s deterrence against Hamas and other Palestinian militias.

Following the Cast Lead campaign, Hamas started digging tunnels the length and breadth of the Strip in order to outflank IDF infantry and armored forces from behind should they launch an incursion into the enclave. The doctrine became clear on the seventh day of Operation Protective Edge, when Hamas rejected an Israeli cease-fire proposal and instead launched attacks on the IDF forces inside Gaza through the tunnels, using its elite Nukhba units trained for such missions. The rest is history: The fighting continued for 50 days. It was an impressive military victory for Hamas, which boasted that even the armies of Egypt, Jordan and Syria had not been able to hold out for such a long time in their wars with Israel.

Hamas continued with its tunnel digging even after the 2014 fighting ended, with the movement’s leaders occasionally promising Israel “surprises” — until the IDF revealed that it had new technological means to locate the tunnels and began destroying them. At the same time, Israel started construction of the underground barrier, spelling an end to the ambitious undertaking and sending tens of millions of dollars down the drain.

Hamas is now seeking an alternative to its tunnels. On the day tunnel No. 18 was uncovered, the IDF intercepted a Hamas drone that had infiltrated Israeli airspace. The movement believes it can develop an “air force” of drones and other unmanned craft, in addition to a “navy” equipped with attack vessels, and surprise Israel from the air and sea in a future conflict. Nonetheless, Hamas realizes that such puny means will not be decisive in any campaign, whereas the attack tunnels might have fared better.

“Canceling the tunnel project is of paramount strategic importance in terms of the Hamas military doctrine,” an Israeli security source told Al-Monitor on condition of anonymity. According to the source, one of the main reasons Hamas fears an extensive armed conflict with Israel is that it no longer has a response to an Israeli ground offensive. Meanwhile, it continues to develop and expand the range of its rockets, which have proven effective against Israel, as well as its multi-rocket delivery platforms designed to overcome Israel’s Iron Dome anti-missile defense.

According to the source, in case of an IDF ground incursion into Gaza, armed Hamas fighters would find themselves in the same situation of having to flee to the enclave’s densely populated towns. While these forces are armed with anti-tank Kornet rockets (which they used during the early May round of fighting), these will not repel a large armored column.

The updated Hamas operational doctrine is also of substantive significance for its diplomatic strategists, who realize the limited effectiveness of long-range rockets and multi-rocket delivery systems. That is why a truce deal with Israel (which has been in the works for months) is the preferred option for the Hamas leaders, despite its drawbacks.