Israel has notified Hamas about the work it plans to start this summer to block the tunnels in the Gaza Strip, in the hope that Hamas will not use this move in order to reopen a military front. 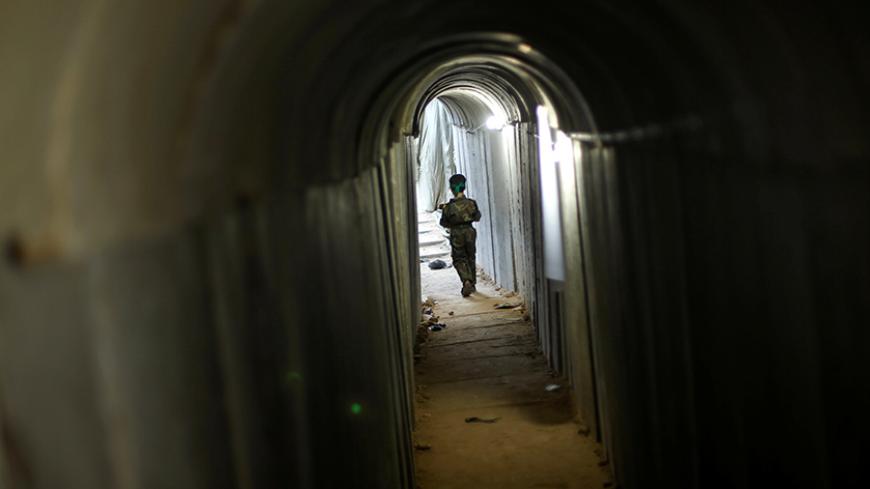 A Palestinian boy walks in a tunnel as he takes part in a military exercise graduation ceremony at a summer camp organised by Hamas's armed wing, east of Gaza City, Gaza, July 22, 2016. - REUTERS/Mohammed Salem

In April, Israel transmitted the following message to Hamas via Egypt: By July, Israel will start construction work on an anti-tunnel obstacle project adjacent to the border with the Gaza Strip in order to block Hamas digging cross-border attack tunnels. This is what a Palestinian security source told Al-Monitor. According to the source, the message was intended to inform Hamas that the project is defensive in nature; Israel has no hostile intentions to attack the Gaza Strip. In addition, Hamas was told that the project will involve hundreds of workers and heavy vehicles.

The assessment is that the Israel Defense Forces (IDF) are worried that a misunderstanding on Hamas’ part regarding the work could lead to another round of violence. The message transmitted via Egypt also included a threat: Should Hamas attempt to harm the workers or sabotage the construction work, Israel’s military response will be harsh. Israel feels that there is a chance that Hamas’ military wing may try to sabotage the construction in order to rescue the apple of its eye: the tunnel project.

According to the Palestinian source, Ismail Haniyeh, the deputy head of Hamas' political bureau, received details about the onset of construction, but Hamas has not yet officially responded to the messages. Perhaps Haniyeh purposely wants to keep his cards close to his chest and retain Hamas’ ambiguous stance on the issue.

The Israeli earthworks will continue for about two years. Already, a concrete production plant has been built adjacent to the Gaza border; the plant will manufacture the tremendous quantities of concrete necessary for erecting the obstacles above and underground, at a depth of dozens of meters and at a length of about 64 kilometers (about 40 miles). The Defense Ministry has allocated 3.34 billion Israeli shekels ($274 million) for the project, hoping it will turn the digging of tunnels from the Gaza Strip into Israeli territory impossible.

Once the project is completed, it will evidently make Hamas’ huge tunnel project irrelevant and useless. The hundreds of millions of dollars invested in those tunnels, at the expense of the welfare of the lives of Gaza residents, will go down the drain.

The IDF has conducted analyses, assessments and simulations to give the military and diplomatic high brass a forecast of Hamas’ likely reactions when its military arm will reveal that its flagship project has lost its effectiveness. Hamas created an entire attack doctrine based on its tunnels and has trained special combat units in its use (“the Nokhba”). But opinions in Israel’s defense system are divided regarding the possible Hamas reactions. The leading assessment holds that Hamas, in its present situation, is not interested in another round of fighting with Israel. Despite the difficulty involved in admitting defeat, it will probably be forced to swallow the bitter pill.

According to a Palestinian security source, Egypt’s role as message-bearer has not yet ended. The source said that Israel has left the communications channel open, lest some kind of incident be misinterpreted by Hamas and lead to another round of fighting.

The IDF prepared a “threat chart” that takes into account all possible scenarios that could lead to deterioration of the security situation on the Gaza border, while the obstacle enterprise is being constructed.

One scenario, for example, is that Hamas’ military wing will refuse to recognize that the tunnel era in Gaza has come to an end. Instead, it may choose to view Israel’s activities along the border as an offensive act to be opposed by force. Will Hamas take such a chance? After all, any opposition on its part may ignite another round of fighting with Israel. There are those in the IDF who think that Hamas has already shown in the past that when the movement’s “achievements” are erased — achievements that had been proudly touted previously — Hamas will not be deterred to engage in a military conflict, no matter what the price. For example, the events that preceded Operation Protective Edge in the summer of 2014 testify to this behavior.

In June 2014, following the kidnapping of three Israeli youths, the IDF arrested 51 Palestinians who had been released in the Shalit prisoner-exchange deal. Previously, Hamas had viewed their release from Israeli prisons as the movement’s greatest achievement. So after the arrests in 2014, the military wing did not hesitate to shoot rockets toward Israel, though it knew that this would lead to Israeli retaliation. The rockets were fired to show the Palestinian public that Hamas is not some kind of submissive entity but a movement willing to fight for its principles. But it had another goal as well: to drag Israel into a military campaign, after which (Hamas hoped) Israel would agree to negotiations about removing the Gaza closure.

The researchers involved in the simulation games recently conducted by the IDF were aware of this motive. Will Hamas try to take advantage of Israel’s obstacle-construction to break the rules of the game — again? So far, there is no clear, definitive appraisal of the odds. But the more the economic situation in Gaza worsens, and the more Hamas feels powerless regarding the distress of the Gaza residents, the more likely it is to retaliate. There is a high likelihood that Israel’s obstacle-building efforts may be the catalyst for an eruption of Hamas violence to break the closure on Gaza.

Another scenario that was taken into account: Even if the Hamas military branch Izz ad-Din al-Qassam Brigades will internalize Israel’s determination to build an obstacle against Hamas tunnels, the jihadi organizations in Gaza may not be likely to do so. These organizations, which lie in wait for any opportunity to challenge Hamas and get it into trouble with Israel, may well take advantage of the fact that hundreds of Israeli laborers with heavy tools will be working adjacent to the long Gaza border — and the workers will be relatively exposed.

Will Hamas prevent them from shooting rockets toward Israel, as it does today? This question, asked by Israel’s political echelons, also has no unequivocal answer. If Hamas will feel threatened — if it will want to worsen the security situation with Israel for reasons not only connected to the construction of the obstacle — then undoubtedly (according to the IDF) it may encourage such organizations to carry out “provocations” against Israel. Alternatively, Hamas may simply turn a blind eye and afterward claim that it was not involved.

There is another point. When the obstacle-construction work is finished, Israeli authorities will claim that the tunnel threat has been removed. Let's remember that, in the past, a steel tunnel-obstacle was constructed on the border with Egypt. Still, after the construction of this underground wall, Hamas confronted the challenge and managed to dig hundreds of tunnels in that region.