Why Israel is in no rush to destroy Hamas tunnels

The IDF hopes that by destroying Hamas tunnels gradually and not all at once it can avoid a full-out confrontation. 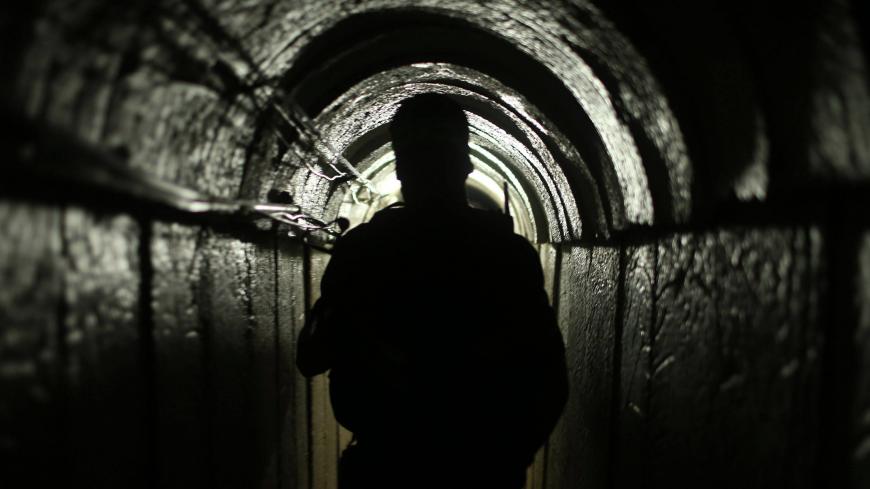 A Palestinian fighter from the Izz ad-Din al-Qassam Brigades, the armed wing of Hamas, is seen inside an underground tunnel in Gaza, Aug. 18, 2014. - REUTERS/Mohammed Salem

The Israel Defense Forces (IDF) destroyed two more border tunnels March 18 in response to the detonation of two explosive devices near the Gaza fence over the weekend. After the operation, Defense Minister Avigdor Liberman promised that by the end of the year, the Palestinian group’s entire tunnel project would be history. "Israel destroys one Hamas tunnel after another, systematically and based on quality intelligence and ground-breaking technology,” he added.

Coordinator of Government Activity in the Territories Yoav Mordechai derided the ambitious tunnel project in which Hamas has invested vast sums of money, terming it ostentatious and pointless. "With all of the cement, iron, electricity and resources the terror organization Hamas is investing in the tunnels that the IDF effectively eliminates time after time, they could have built a pyramid, a world wonder. However, Hamas' terror tunnels are a world wonder of stupidity," said the major general in a statement.

Since the October 2017 operation that destroyed a cross-border tunnel dug by the Islamic Jihad, and killed at least 14 of the group’s militants and Hamas operatives, the IDF has bombed or blocked five additional tunnels along the border with the Gaza Strip. Israel has made it clear to Hamas that it has developed the operational and intelligence capabilities to precisely map the tunnel network and destroy it.

The extent of Hamas' underground project was exposed during the summer 2014 war with Gaza, codenamed Operation Protective Edge. The country’s defense agencies came under harsh criticism for being caught unaware and failing to control the new threat in time. In February 2017, the state comptroller issued a stinging report saying the IDF had failed in its handling of the threat and worse, had not known the extent of the project, which posed a serious danger to residents of southern Israel. According to the government watchdog’s report, the political echelons should have instructed the IDF to concentrate on this threat at the start of the military campaign, and doing so would have prevented the July 2014 killing of five Israeli soldiers in an outpost near the kibbutz of Nahal Oz by Hamas fighters who infiltrated Israel through a tunnel and then used it to flee back to the Strip.

More than three and a half years have elapsed since that operation and, according to the Southern Front commander, Maj. Gen. Eyal Zamir, Hamas keeps digging tunnels despite the barrier Israel is building along the border. Israel has appropriately and ominously dubbed the underground wall designed to prevent Hamas from tunneling into Israel “the guillotine.”

If, as claimed by Liberman and Mordechai, Israel has precise information about the location of the Hamas tunnels, why doesn’t the IDF take immediate action to destroy all of them, as urged by the comptroller general? Why did the IDF decide to destroy the two tunnels on March 18 only after explosive devices were set off against Israeli forces along the Gaza border? Al-Monitor has learned from an Israeli defense source that Israel had decided on a course of action designed primarily to prevent the eruption of an all-out military clash with Hamas.

According to the source, who spoke on condition of anonymity, the IDF will deal with each tunnel “in due course. Hamas keeps giving the IDF sufficient opportunities to make the tunnel destructions seem like punitive retaliation against the organization’s terror attacks.” Indeed, other than the October 2017 destruction of the Islamic Jihad tunnel, when armed fighters were inside and appeared to pose an immediate threat of a terror attack, the IDF takes action against the tunnels only after hostile activity by Hamas, such as detonations of explosives or firing of rockets. According to plans the IDF presented to the political echelons, the tunnels that have already been located will be sealed off or otherwise destroyed in the coming months.

Israeli defense officials believe this tactic will pressure Hamas to stop the tunnel project without risking a head-on military clash. The thinking is that if the IDF destroys a Hamas or Islamic Jihad tunnel in response to armed activities, the Palestinian organizations have a good reason for restraint.

At the same time, Hamas is trying to downplay the significance of the blow it is being dealt by the IDF’s anti-tunnel operations. Following the most recent destruction, a military spokesman for the group said, "The tunnel that Israel claimed it exposed is an old tunnel that is not in use.” Israel’s announcement, he added, “is a new deception and an attempt to create the illusion of power and false victories in the eyes of the Israeli public and the international community."

These announcements, similar to others Hamas has issued in the past, point to the organization’s desire to signal to the Palestinian public that it holds high-quality secret weapons against Israel and that its extensive financial investment in the tunnels is not wasted. Since October 2017, Liberman, Mordechai and Zamir have all been reiterating the same message to the Palestinians that Hamas is squandering money on a useless military project instead of using it for the welfare of Gaza’s population. The question is how long the Hamas leadership, especially the heads of its military wing, will keep biting their lips as they watch one of their key offensive strategies being destroyed, “one tunnel after another,” to quote Liberman.

Placing explosives along the border with Israel signals the organization’s desire to find an alternative to the collapsing tunnels, but doing so merely accelerates their destruction. For every explosive device and every Qassam rocket, the IDF will destroy an additional tunnel from the bank of targets at its disposal.