How Israel is bringing an end to Hamas' tunnels

With a combination of intelligence and cutting-edge technology, Israel is developing a new system for not only detecting but quietly destroying Hamas' tunnels. 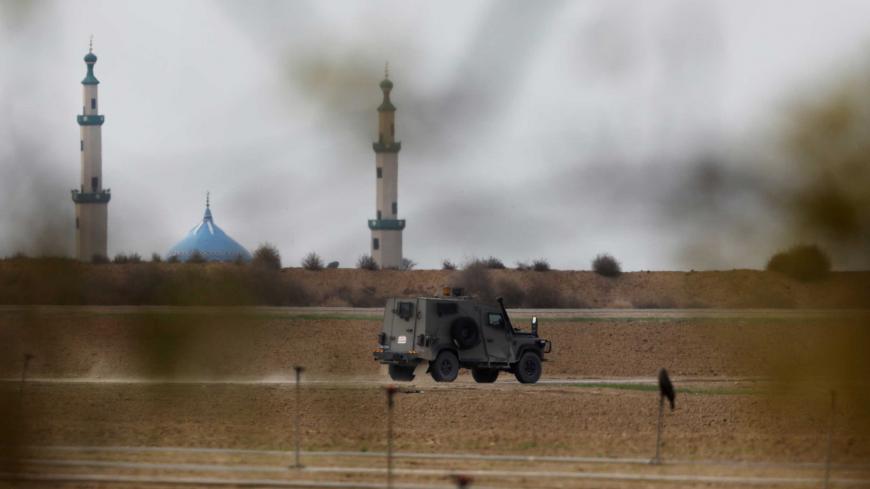 An Israeli military jeep drives near the area where the Israeli forces said it destroyed a "significant" cross-border attack tunnel being dug by Hamas, near Israel's border with the Gaza Strip, Dec. 10, 2017. - REUTERS/Amir Cohen

There were no loud explosions, and no plumes of black smoke rose along Israel's border with the Gaza Strip. The latest Hamas tunnel was discovered weeks ago using advanced technology developed by Israel. The Israel Defense Forces (IDF) kept news of the tunnel secret until completing preparations to neutralize it with innovative methods.

It is worth remembering that the last time the IDF destroyed a tunnel dug by the Palestinian Islamic Jihad movement it failed to realize that members of the terrorist group were inside it at the time. Despite efforts to extricate survivors, the demolition of the tunnel resulted in the deaths of 12 Islamic Jihad and Hamas fighters and almost led to a major conflagration. This time, the tunnel was neutralized in absolute silence.

Hamas appears to have had no idea that its strategic tunnel had been located or that it had been targeted by the IDF for weeks. Following the operation, Defense Minister Avigdor Liberman said Dec. 10, "Thanks to the joint efforts of the IDF, the Ministry of Defense and the defense industries, we have reached new technological capacities in the struggle against terrorism and the terror tunnels. I hope that over the next few months, the threat posed by the tunnels to Israelis living in localities surrounding the Gaza Strip will be a thing of the past."

Liberman's comments prompted a series of public statements by top Israeli officials that after investing unlimited resources and the extensive efforts of the country's finest minds, Israel has managed to remove the threat of the tunnels, which have kept the people of the south up at night for the past few years. The truth is much more complicated, though there is no doubt that Israel is getting closer to achieving this capacity.

"It's not like we have some machine that locates tunnels and destroys them," a senior defense official told Al-Monitor on condition of anonymity. "This is a system based on the integration of three parallel approaches: shielding, intelligence and technology."

As of now, this approach is effectively keeping Israel's border with the Gaza Strip sealed. Israel estimates that in the near future it will be able to eradicate the existing tunnels entirely and make it impossible to dig new ones.

The Hamas tunnel destroyed this week was especially long, stretching several hundred meters into Israel. Israeli officials say that it was intended to allow Hamas to strike behind IDF lines in the next round of violence, just as the group attempted to do during Operation Protective Edge. Now Hamas has been denied that ability.

The movement developed its underground strategy to gain an advantage over the IDF, but that advantage is decreasing rapidly. This development is forcing Hamas to confront a strategic dilemma. Should it accept the existing situation and search for new ways to attack Israel, or should it act quickly to take advantage of whatever tunnels it may have left before it is too late to use them?

This danger is one reason the IDF did not make a big deal of the tunnel's neutralization on Dec. 10. Apart from some warnings by the chief of the Southern Command, Eyal Zamir, to Hamas and Islamic Jihad that the tunnels would become a death trap for their fighters, the IDF has remained quiet. "There's no need to celebrate," one senior military official told Al-Monitor on condition of anonymity. "These are sensitive times, especially after President [Donald] Trump's declaration concerning Jerusalem. There is no reason to help anyone who wants to bring about the deterioration [of the security situation]."

Israel's approach to this operation was based on three components. The first, shielding, consists of a vast underground cement barrier being built along the border that should eventually encompass the entire Gaza Strip. The wall extends several dozen meters underground, and experts say that there is no way to dig tunnels beneath it. The wall is outfitted with sensors and other technologies to detect other tunnels and identify new excavation efforts.

The second component, intelligence, involves using all means at the disposal of Israel's defense establishment — HUMINT (human intelligence), SIGINT (electronic signal intelligence) and others — to learn where and when militants are excavating tunnels. The IDF has told Al-Monitor that Israel has put together a very good picture of what is happening on the ground.

The third component, technology, includes the major innovation that enabled Israel to locate the two tunnels in the past two months. It was an integrated effort by all of Israel's defense industries. The Defense Ministry's Administration for the Development of Weapons and Technological Infrastructure set up a lab near the Gaza Strip for the country's finest minds to tackle the problem.

"Each meter that we check takes a lot of time and serious investments," a senior Israeli military official told Al-Monitor on condition of anonymity, "but we are getting results."

Despite remarks by a number of Israeli leaders this week, the country's ability to identify and destroy the tunnels and to seal its border with the Gaza Strip has yet to be perfected. "We are making progress. Our capacity will improve, and we will reach a stage in which we can announce that there are zero tunnels and that the threat has been neutralized," one senior Israeli security official said on condition of anonymity. "But we're not there yet."

In the same week that Hamas is celebrating the 30th anniversary of its founding and Israel is marking the 30th anniversary of the start of the first intifada (1987), Hamas finds itself facing a multifaceted crisis. It has ceded government control of Gaza to the Palestinian Authority, it continues to be isolated internationally and Israel's missile defense system has successfully neutralized 89% of the threat posed by rockets to the Israeli homefront, based on Defense Ministry figures from Protective Edge. Now the tunnels are slipping out of its hands as well. Hamas will have to reinvent itself if it wants to remain relevant. Given its current conditions and the means at its disposal, it will be especially difficult to do.