Hamas is in the midst of rebuilding its tunnel network under Gaza and into Israel, while the IDF has begun work to neutralize the threat. 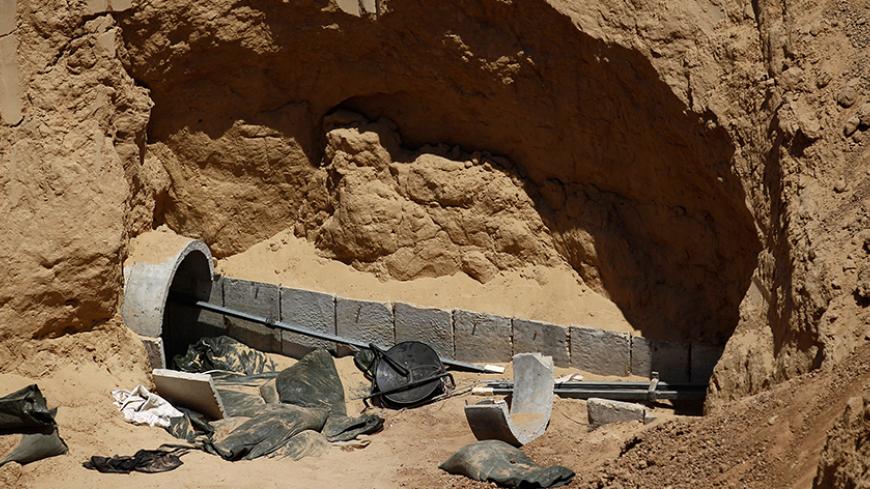 Part of a tunnel exposed by the Israeli military is seen on the Israeli side of the Israel-Gaza border, Aug. 14, 2014. - REUTERS/Amir Cohen

Israeli citizens are used to living under constant threat. Israel has been in an official state of war since the day it was founded in 1948. This is just part of the Israeli “routine.” In fact, it doesn't even prevent Israelis from being ranked first or second in terms of “happiness,” as evidenced in the UN World Happiness Report, polls by the Organization for Economic Cooperation and Development and other surveys. Only one threat rouses Israelis to true panic: Hamas' tunnels.

There is something about the tunnel phenomenon that elicits a deep fear in the toughest of Israelis. Residents of the Gaza envelope don't sleep so well thinking that Islamic jihadis might emerge at any given moment from the depths of the earth in the heart of a kibbutz to kill or abduct them and disappear without a trace. In recent weeks, this threat returned to the Israeli public's attention in a major way.

On Feb. 3, Hamas announced the collapse of a tunnel in the midst of construction. Evidently, at least two Hamas activists or fighters were killed and eight injured. A similar collapse had occurred a few days earlier, killing seven people. Hamas had tried to hide these events, but without much success.

According to the organization, the latter tunnel was the one kidnappers used to abduct the Israeli soldier Oron Shaul during Operation Protective Edge, in July 2014. Hamas leader Ismail Haniyeh has confirmed that the movement is swiftly renovating its tunnel system. The Palestinians claim that they have already reached the same subterranean capabilities they had on the eve of Operation Protective Edge, but Israel's top brass believe that to be a wild exaggeration — although no one doubts the digging operation is around the clock, in shifts. They are trying to fix as many tunnels as possible to allow Hamas to restore its assault capacity against the Israel Defense Forces (IDF).

Hamas chose the tunnel system as a daring strategic weapon to compensate for its obvious weakness compared with the IDF in three battle-related arenas. Israel has air superiority, because its air force, one of the best in the world, enjoys full control of the skies, including use of some of the most sophisticated combat drones available. It became known only recently — in the wake of documents from Edward Snowden's cache — that Israel’s combat drones are armed, allowing it to attack targets and efficiently carry out targeted killings. Hamas is also no match for the IDF on the ground. The latter is larger and much better equipped and trained. The same holds true for naval superiority. Although the Palestinians established a “naval commando,” with stalwart scuba divers, they cannot compete with the fast boats of the Israeli navy.

Thus all that remained for Mohammed al-Deif — leader of Hamas’ military wing who during Operation Protective Edge survived the fifth attempt on his life — was to find a sector where his organization would have a relative advantage over IDF soldiers. He searched, and he found it in the underground battlefield.

Hamas views an abducted Israeli soldier as its biggest prize. The Israeli public cannot bear the thought of a kidnapped soldier being held prisoner by a terrorist organization. The national psychosis that developed around Gilad Shalit's abduction proved the truth of this hypothesis yet again. After holding Shalit a little more than five years (2006-11), Hamas received about a thousand Palestinian prisoners in exchange for him, one Israel soldier. Most of the prisoners were convicted murderers.

The primary reason Hamas is building the tunnels is to facilitate the abduction of Israeli soldiers or civilians and drag them through the same tunnel to a hiding place prepared in advance. Hamas operatives in the depths of the tunnels are protected from aerial bombing, tank shells and even the IDF’s infantry units. In trying to disable the tunnels during Operation Protective Edge, the Israeli air force dropped a large number of earth-penetrating JDAM bombs on tunnel shafts only later to find that they had caused only minor damage. All the enemy had to do was dig an alternative entrance nearby.

In January, Gaza envelope residents filed a number of reports about noise from intensive digging, especially at night. Journalists and television crews flooded the area to record the sounds emitting from the ground, clearly audible for long hours of the day. The story made headlines in Israel, and the public wants clear answers from the IDF.

According to current analysis, the Palestinians are far from finishing the tunnel renovations. At the height of the underground operations, Hamas had 32 tunnels, a large proportion of which crossed into Israeli territory. The updated assessment is that Hamas is in the throes of a renovation effort, and the IDF is unaware of any tunnels having penetrated Israeli territory thus far.

There appears to be a sort of “tunnel arms race,” with the Palestinians trying to dig into Israeli territory, and Israel trying to develop a counter-deployment as the appropriate Zionist response. The Israelis call it the “underground Iron Dome,” referring to the anti-missile Iron Dome defense system. The tunnel defense is expected to allow effective recognition of tunnel-building activity with maximum accuracy. The US government recently authorized $120 million in special assistance for the development of such a system. Until it is in place, the IDF is considering beefing up protection around the Gaza envelope, sending infantry into the area and even conducting pre-emptive strikes. The latter option was recommended Jan. 31 by opposition leader Isaac Herzog. He said that if Israel is aware of the existence of assault tunnels, it must blow them up now, meaning before, not after, a catastrophe.

“The panic is exaggerated,” a highly placed Israeli security source told Al-Monitor on condition of anonymity. “Hamas is not ready for a clash with Israel at the moment. Their tunnel deployment now is far from the way it was before the Protective Edge campaign, and Israel is developing a mechanism for neutralizing the tunnels. The uproar is excessive.”

Nevertheless, anyone who has recently visited Gaza envelope locations cannot but be taken aback by the large quantity of heavy equipment deployed by the IDF for digging, drilling, maneuvering and wire-tapping at various spots in the area — that is, wherever distraught residents have reported someone digging under their homes. Israel is hoping that Hamas won’t try to break out if its isolation a second time via these tunnels from hell.

“Most of the houses that were destroyed in Gaza during Protective Edge are still in ruins,” a senior Israeli officer for the Gaza envelope sector told Al-Monitor on condition of anonymity. “Hamas knows this, and is very aware of what will happen if they attack again.” Prime Minister Benjamin Netanyahu issued a threat of his own: “If we are attacked from tunnels from the Gaza Strip, we’ll respond more powerfully that we did during the Protective Edge campaign.” Maj. Gen. Yoav “Poli” Mordechai, coordinator of government activities in the territories, also sent a message to Gaza.

Regardless, Israel is aware that the Gaza pressure cooker might be headed toward an explosion. To Gaza’s south, Egyptian President Abdel Fattah al-Sisi is sealing tunnels and has closed the Rafah crossing because he views Hamas as a threat to his country's national security. To Gaza's west lies the Mediterranean Sea, controlled by the Israeli navy. The option left for Hamas is to challenge Israel underground to find a way out. Israel has risen to the challenge, and now the sides are asking themselves when, not if, the next round in Gaza will be.