Besides constructing an underground wall obstacle to thwart the building of attack tunnels, Israel is also developing technologies to identify tunnel digging from above ground. 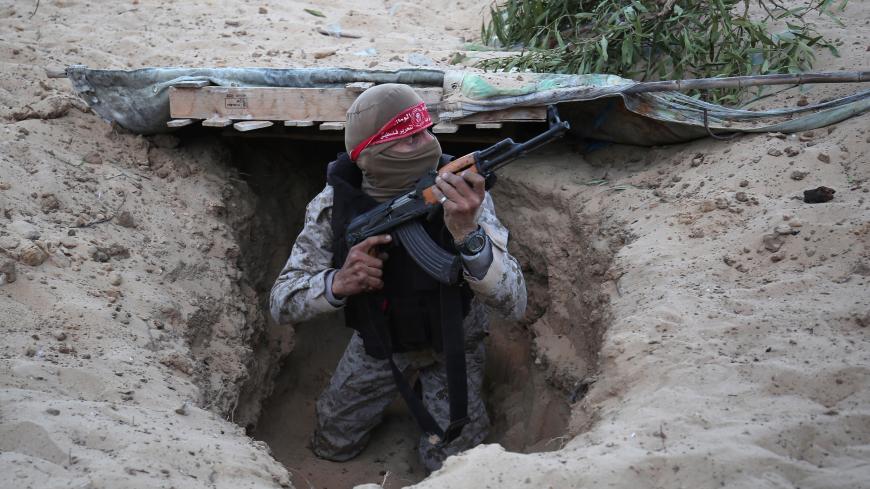 A Palestinian militant of the National Resistance Brigades, the armed wing of the Democratic Front for the Liberation of Palestine, exits a tunnel during a graduation ceremony, Rafah, Gaza Strip, Nov. 4, 2016. - SAID KHATIB/AFP/Getty Images

Having already invented, developed and enhanced technology capable of shooting down rockets in flight, Israel is now close to developing technology to locate and identify tunnels dug deep underground with precision that will make it possible to bomb them from the air or neutralize them using other means. It is a breakthrough technology, and Israel has invested billions in it over the past decade. Its purpose is to prevent Hamas and other terrorist groups in the Gaza Strip from having the kind of underground reach that became a tangible threat to Israel during the 2014 Operation Protective Edge.

Until now, all efforts have failed. This included experiments with underground sensors of various sorts. They were incapable of distinguishing between normal rumblings underground or the movement of heavy machinery and tractors and the actual digging of tunnels dozens of feet underground. Israel seems to have cracked that problem now. The new technology received operational confirmation Oct. 30 when 19 Palestinian Islamic Jihad and Hamas activists in Gaza were killed, according to Israel Defense Forces (IDF) estimates, when an Islamic Jihad tunnel was bombed. The tunnel had already penetrated Israeli territory and threatened to become a terrorist tunnel.

The tunnel was first identified several weeks ago, and Israel watched tensely as it developed. Since it crossed into Israeli territory and violated Israeli sovereignty, Israel decided to destroy it. What Israel did not know was that excavators were in the tunnel at the time of the assault. They were killed by the blast. Another thing Israel did not anticipate was that to extricate their corpses, a special force, including a brigade commander in the Islamic Jihad movement and his deputy, were sent into the tunnel. They were also killed there, apparently suffocating on gases that were released during the bombing. The incident increased tensions along the southern sector and threatened to disturb the calm that has prevailed there since the end of the traumatic summer of 2014, which left Gaza in ruins and Israel licking its wounds. As of the writing of this article, silence has been maintained. None of the parties are lashing out, despite the casualties from Islamic Jihad and Hamas.

Ever since the tunnel was destroyed, senior Egyptian intelligence officials have set off on a long round of mediation between the parties in an effort to prevent a conflagration from erupting. Both sides are well-aware that the previous round of violence, in 2014, was not planned. Rather, it was the result of a deteriorating situation and the loss of control on both sides. Neither of the parties needs another round of violence like that right now. The IDF has clarified that it did not know that there were excavators or fighters in the tunnel at the time, and that it did not plan to launch a "targeted killing." It simply wanted to destroy the tunnel. The Egyptians have made it clear to the Gazans that the use of force in response to the Israeli action would result in an even more forceful Israeli response, upon which Cairo would immediately wash its hands of any responsibility for what happens next. Palestinian President Mahmoud Abbas also joined the chorus calling for calm. A ceremony was planned for the day after the bombing of the tunnel to mark the transfer of control over the border crossings into Gaza from Hamas to the Palestinian president (as part of the Palestinian reconciliation agreement). No one wanted to ruin the moment, so the calm has been maintained, at least for now.

Israeli interests here are also sensitive and complicated. Last year, Israel began installing its famous underground obstacle, which was supposed to put Israel outside the underground range of the Gaza Strip. The installation is an impenetrable cement wall reaching dozens of meters underground and armed with sensors and other technological means. The wall will not only block tunnels, it will also locate them and block them by injecting powerful cement into them.

Islamic Jihad's tunnel, the first that this group has ever dug into Israel, was not located in the area where the underground obstacle is now being installed. It was some distance away and located by another technology currently being developed by Israel. Since the obstacle has not been fully installed, Israel's preparedness for another round of violence against Gaza is not at its best.

Furthermore, Israel has been following the Palestinian reconciliation efforts with considerable apprehension and trying to develop an effective strategy against it. The Cabinet already decided that Israel would not negotiate with a Palestinian government that relies on Hamas. On the other hand, the Americans have a completely different position. Fighting on the Israel-Gaza border at the present time could interfere with or even block Palestinian reconciliation, thereby serving an Israeli strategic interest. But such a move would also cause problems for Israel with its two most important allies, the United States and Egypt. This is the reason behind the IDF spokesman's clarification to military correspondents in Israel that the country did not plan to kill any senior terrorists or activists. It just wanted to destroy the tunnel. In other words, Israel has been following the rules of the game that are in place along the southern front ever since Operation Protective Edge. It has no interest in a new round of violence. Within just a few days, it was learned that the other side has adopted the same strategy. The current state of calm is good for everyone.

The only thing that really heated up after the bombing of the tunnel was the Israeli right, which quickly lit up the Israeli political arena and media. Tweeters on the right were joined by Knesset members from the Likud and especially by the chairman of HaBayit HaYehudi, Naftali Bennett, in a series of sharp attacks against the army spokesman for announcing that Israel did not intend to harm the Hamas and Islamic Jihad activists. "We must not apologize for the successful elimination of terrorists. These were terrorists who were digging a tunnel into Israel," he tweeted.

As far as it is known, the men in the tunnel really did cross the border and were violating Israeli sovereignty at the time of their deaths. But Bennett was also criticized, mainly from the center and the left, for his irresponsible attack on the IDF. "Instead of praising the IDF for its brilliant operation, its intelligence capacity and the immaculate destruction of the tunnel, they are attacking the army for making it clear that it had and has no intention to set the region on fire," one senior Israeli security figure told Al-Monitor on condition of anonymity. "These people have lost any sense of responsibility. They have no qualms about attacking the army and national unity if it means scoring a few points from the right. Sad!" he concluded in Donald Trump-speak.