Hamas' focus on reconstructing its tunnel infrastructure and rearming, while ignoring the lack of housing in Gaza and the general misery of Gaza residents, points to the military wing's dominance in the organization. 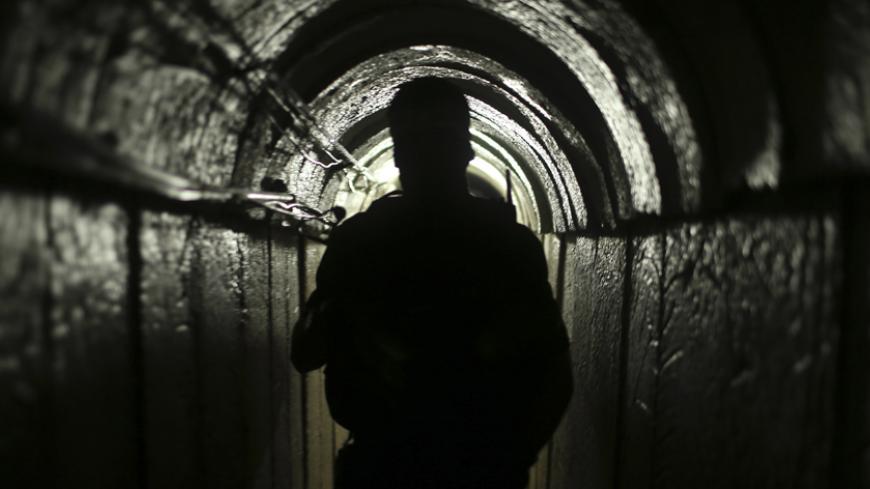 A Palestinian fighter from the Izz ad-Din al-Qassam Brigades, the Hamas movement's armed wing, is seen inside an underground tunnel in Gaza, Aug. 18, 2014. - REUTERS/Mohammed Salem

Hamas’ military wing has been vigorously repairing the damage from last summer's Operation Protective Edge in the Gaza Strip, including investing great efforts in rebuilding its system of tunnels. The first such public indication of this was the arrest this week of three Israelis — two businessmen and a resident of a community on the Gaza periphery. The three men are suspected of having supplied Hamas with metal bars and sheet metal for construction, electric and electronic devices, communications equipment and various other industrial materials that were smuggled clandestinely into Gaza.

The charges filed against them March 2 at the Beersheba District Court allege that the defendants built a business infrastructure to fund the smuggling, involving purchases as well as payments, via several banks in the West Bank in a bid to circumvent the tight supervision of commodities entering Gaza. It is claimed that the three concealed prohibited equipment inside containers whose content was authorized for transit, thereby bypassing inspection. Their arrest provided Israel with proof of Hamas' motivation and rapid regrouping to revive its tunnel project, which is also an indication of preparations for the next armed confrontation with Israel.

This is not the only telltale sign noticed by the Israeli defense establishment of the considerable effort that Hamas’ military wing has been making to repair last year's war damage. Despite the great secrecy Hamas attaches to the project of rebuilding the tunnels, which were heavily damaged by the Israel Defense Forces (IDF), the movement is unable to conceal its reconstruction activities in the areas of the destruction or the construction of tunnels in areas where none previously existed.

The project, which resumed weeks after the battles in Gaza subsided at the end of August, employs hundreds of skilled Palestinian workers and numerous transport vehicles, such as trucks and tractors, and heavy machinery. As a result, the work, which is supposed to be secret, is exposed for almost everyone in Gaza to see. Some people speak about it in broad terms on social media. Gaza residents have noted that the areas near the Israeli border, in the south and north of Gaza, are teeming with trucks moving earth. Hamas has declared the areas of the work off-limits and has posted movement members to stand watch.

During and after Operation Protective Edge, the tunnels from which dozens of armed Hamas militants emerged in total surprise sparked a sensational dispute in Israel, rife with mutual recriminations between the IDF and Shin Bet as well as the defense establishment and the political echelon. It revolved around whether Israel had been aware of the scope of Hamas’ tunnels and whether political leaders had been warned about it. The question addressed to the political echelon was why action had not been taken to avert the potential danger to residents from the explosives and smuggling tunnels dug beneath their settlements if the intelligence services had indeed been aware of them. These questions have yet to be answered in full. After the March 17 general elections, State Comptroller Joseph Shapira is expected to publish his findings on various issues relating to Operation Protective Edge, including the tunnels.

Even assuming that the scope of Hamas’ tunnels was unclear until Operation Protective Edge, today — six months after the cessation of fighting — nobody in the Israeli defense establishment or the political echelon can claim a lack of information about the reconstruction of the tunnels or the effort Hamas is investing in the project. Perhaps as a lesson from the past and the desire to provide real-time warnings, several IDF officials are in fact publicly addressing the tunnel reconstruction and Hamas’ current preparations ahead of the next round of fighting.

The rampant tunnel reconstruction is not only indicative of the military wing’s conduct, but also of the warped priorities of a movement that started out as a welfare organization. The military wing has risen against its founders. Operation Protective Edge inflicted immense damage on Gaza, resulting in more than 2,200 fatalities, thousands of wounded and unprecedented devastation to houses and infrastructure. A quarter of the population is homeless. Still today, thousands of families whose homes were destroyed live in public buildings.

Discussion of Gaza’s rehabilitation and Palestinian Authority President Mahmoud Abbas' role in making it happen has remained mere talk. Once again, Hamas is investing the scant resources it can get its hands on in preparing for the next war. From talks I have had with Hamas activists in the past, they do not consider their armament and organizational activities offensive preparations, but rather defensive actions, against Israel’s aggression. Even if one accepted this argument at face value, it is hard to understand why the movement, recently declared by Egypt a terrorist organization, isn't engaged in some soul-searching instead of adopting a business-as-usual approach while making jihad against Israel its top priority.

That the dire situation of Gaza residents is being ignored at the expense of rebuilding the military wing can perhaps be explained by the balance of power in the Hamas movement in recent years. The military wing has become the leader, setting the tone, while the political leadership toes the line. As long as power remains in the hands of the Izz ad-Din al-Qassam Brigades, the movement’s priorities will continue to be the consolidation and buildup of the military wing, only after showing some concern for the daily existence of Gaza residents.

Israel is also guilty of poor prioritizing. It concentrates its efforts and resources on the Iranian nuclear threat, while ignoring the threat of the tunnels that endanger its citizens, much like it did last summer.