Hamas' testing of Qassam rockets points to the movement's failure to draw the right conclusions or lessons from its last confrontation with Israel. 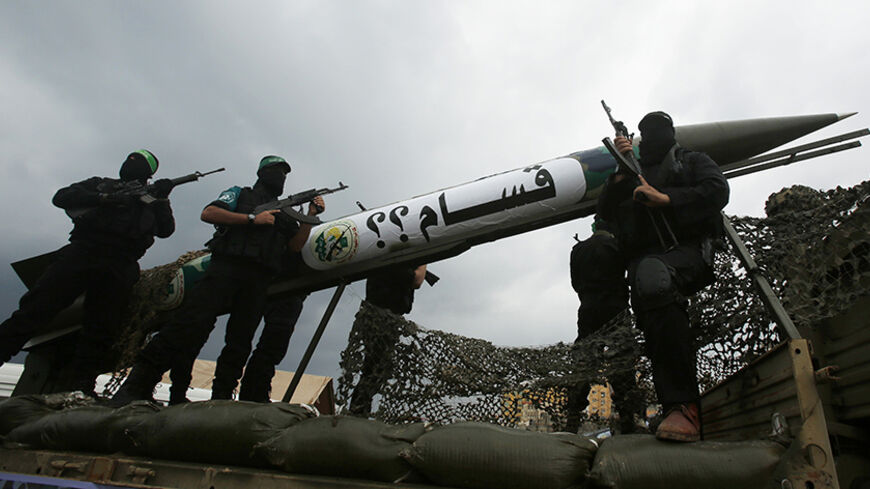 Less than four months after the Aug. 26 conclusion of Operation Protective Edge in the Gaza Strip, Hamas’ military wing is preparing for its next campaign against Israel, showing marked signs of bouncing back. On three consecutive days, Dec. 11-13, Hamas fired rockets into the Mediterranean Sea in a series of tests it has been conducting this month. Residents of the Gaza Strip as well as Israelis living along the Gaza border reported hearing rockets whizzing and seeing plumes of smoke over the sea. All told, Hamas conducted dozens of launches in broad daylight, knowing full well that Israel would be aware of them, monitoring the situation vigilantly.

Not trying to hide or play down the tests, senior Hamas official Mousa Abu Marzouk confirmed that his organization was testing Qassam rockets. He argued that the tests did not violate the cease-fire agreement between Gaza and Israel because the understandings did not stipulate that Hamas was barred from conducting them.

Israeli defense officials maintained that Hamas wanted to rebuild its launching capabilities, which were seriously compromised during the summer confrontation with the Israel Defense Forces (IDF). Hamas is trying to learn lessons from the fact that hundreds of rockets fired at Israel during Operation Protective Edge caused no serious harm due to their poor accuracy on the one hand and the success of the Iron Dome missile defense system on the other. The assessment in Gaza is that to create a significant deterrence, the organization’s rocket lineup has to be drastically improved.

In the aftermath of Operation Cast Lead in December 2008, when Hamas military leaders realized that they had no appropriate military response to an Israeli ground incursion and that they could not face off against a large Israeli ground force, it was decided to develop the tunnel system with the hope that this new type of approach would stop or at least seriously hamper IDF infantry.

In reality, the Palestinian forces that were trained to burst from the tunnels and stage ambushes managed to strike IDF soldiers only during the first days of Operation Protective Edge, after which the element of surprise was lost. The limited effectiveness of the tunnels did not justify the tens of millions of dollars that had been poured into their development.

Lobbing long-range rockets north of Tel Aviv also did not yield the results that Hamas’ military wing had hoped for. While those rockets did travel long distances, just shy of reaching the northern city of Haifa, they landed mostly in the Mediterranean or in open, uninhabited areas. In addition, their accuracy left a lot to be desired.

When Operation Protective Edge ended, the movement’s leaders and the heads of its military wing sought to foster a sense of victory over Israel, despite Gaza sustaining some 2,100 fatalities, tens of thousands of casualties and massive devastation. Hamas contended that its forces had managed to take Israel by surprise, setting the rules of the confrontation and holding out for 56 days with no decisive outcome, despite facing one of the strongest militaries in the region.

Israel was indeed surprised by some of Hamas’ military capabilities and was unable to deal a serious blow to it. During the confrontation, however, the Israeli government had decided not to destroy Hamas or to topple its regime, a decision that elicited a vehement defense and political debate that has extended into the current election campaign. Senior IDF officials maintain that if the political echelon had given an order to bring down the Hamas regime, it would have done so. As usual, however, Hamas apparently misinterpreted Israel’s conduct and as a result also drew the wrong conclusions.

Spanning the gamut from impressive to pathetic, the Dec. 14 military parade celebrating the 27th anniversary of Hamas' establishment is another case in point. The movement’s leaders — Ismail Haniyeh, Khalil al-Haya and Mahmoud al-Zahar — attended the festivities in Gaza. The chief of the political bureau, Khaled Meshaal, and Abu Marzouk watched from afar. Abu Obeida, spokesman for the military wing, bragged, “Hamas has successfully stopped the aspirations of the Zionist enterprise. Thanks to the organization, Israel is on the cusp of collapsing and disappearing.” Khalil al-Haya, whose son was killed during Operation Protective Edge, asserted, “Those who think that Israel is here to stay are wrong.”

This bravado stems from Hamas' pride in developing an unsophisticated rocket whose effectiveness, as made evident in recent confrontations, amounts to limited psychological deterrence. While these rockets should not be dismissed entirely, they nevertheless do not constitute a significant military strength requiring reckoning. Since October 2001, when the first Qassam rocket was fired from the Gaza seashore in the presence of Mohammed al-Deif, head of the military wing, and its developer, Adnan al-Ghoul (killed by Israel in 2004), Hamas’ pride has blinded the organization’s leaders, bringing calamity to the Gaza Strip. After countless skirmishes with Israel and three large-scale IDF operations, it turns out Hamas has not drawn any correct conclusions or really learned any lessons.