Inside Hamas, the military branch is gradually taking even stronger control of the movement's institutions and blocking attempts to reach a long-term cease-fire with Israel. 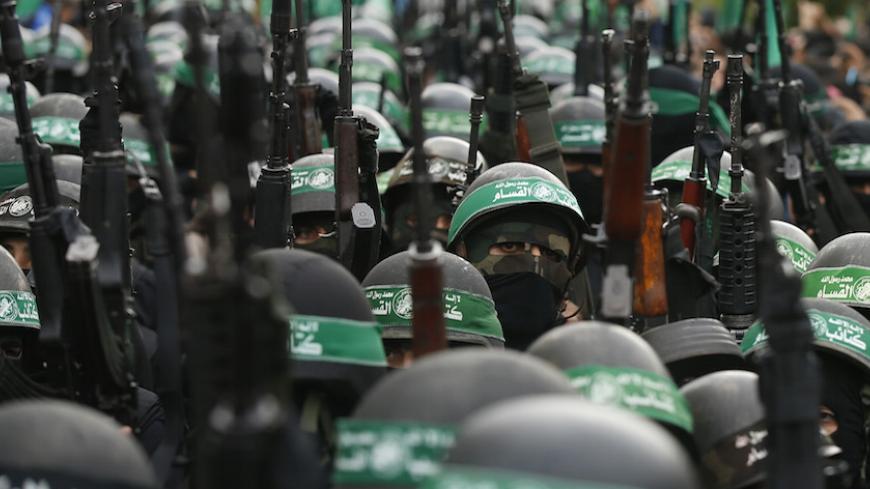 The tension between Hamas’ political and military wings is intensifying. Senior Palestinian Authority sources monitoring the events from within Hamas informed Al-Monitor on condition of anonymity that the leaders of the military wing, the Izz ad-Din al-Qassam Brigades, have been pressuring members of the political wing to stop probing the possibility of a diplomatic arrangement, whose main thrust is a long-term cease-fire. The military wing’s leader, Mohammed al-Deif, who according to reports has only recently resumed full activity in Hamas following an abortive attempt on his life during Operation Protective Edge in August, is pulling in a different direction. Espousing rapprochement with Iran, he wants to bolster Hamas’ military array in the Gaza Strip and prepare it for a future confrontation with Israel.

By contrast, the political wing, which understands full well Hamas’ dire situation in Gaza, is striving — through European brokers — for a long-term cease-fire with Israel. In its members' opinion, this direction will lead to a significant easing of the ongoing blockade over Gaza. The members of the movement’s political wing — Khaled Meshaal, Mousa Abu Marzouk, Ismail Haniyeh and others — apparently understand all too well that given that Egypt has almost completely sealed the Rafah border crossing and declared Hamas a terrorist movement, the chances for preserving a long-term Hamas rule in the Gaza Strip are getting slimmer. If Hamas fails to reach a rapprochement with Saudi Arabia — a possible new patron (following Qatar’s cold shoulder) — and if it fails to reach a long-term cease-fire arrangement with Israel, another armed confrontation with tragic consequences is just a matter of time.

The struggle between Hamas’ political and military wings is taking place at one of the movement’s most dramatic moments. It must choose between compromise and war, between acceptance that dramatic decisions have to be made in a complex reality and its policies, which have already brought it to the brink of disaster. Since the June 2007 coup, the leaders of the military wing have built a massive army consisting of tens of thousands of armed men and want to maintain and even expand the military hegemony they have instituted in Gaza. The political wing, on the other hand, realizes that without a diplomatic compromise with Israel, Hamas will lose its grip and rule in the Gaza Strip.

It should be noted that the communiqués relayed to Israel in recent months through various brokers, including UN special envoy Robert Serry, Swiss Consul Paul Garnier and more recently Saudi envoys, chief among them Prince Turki al-Faisal, have met neither a positive reaction nor a rejection. Senior Hamas official Ahmed Yousef, formerly Haniyeh’s political adviser, even confirmed to Maan news agency the political wing’s desire and overtures to reach formulated understandings with Israel.

It is commonly believed that the intra-organizational struggle will end with the military wing having the last word, and the political wing will have to back down. Almost since its foundation, and especially since the military wing has become the dominant factor in setting policy, Hamas has conducted itself accordingly. Any compromise that the leaders of the political wing tried to promote with Israel over the years was met by opposition and sabotage through deliberate acts of terror.

The members of the political wing, who are now being threatened and intimidated by armed al-Qassam militants, have only themselves to blame, given their conduct and constant groveling before them. This has been the case since the days of Hamas military leaders Salah Shehadeh, Yahya Ayyash, Ahmed Jabari and of course the legendary Deif.

All those years, the political wing claimed that the military decisions, including the terror attacks in Israel, the suicide bombings during the second intifada and the rocket fire have been exclusively planned and authorized by the military wing. The movement’s senior members, such as Haniyeh and even Abdel Aziz Rantisi (assassinated by Israel in 2004), have always maintained that they have nothing to do with the operational decision-making process and the planning of terror attacks, arguing that the military decisions are implemented by al-Qassam Brigades.

Shirking responsibility had an obvious objective: to dodge Israel’s targeted killing policy. But regardless of its reasoning, in so doing, the political wing enabled the military wing to operate independently. And this pattern of behavior has taken hold over the years. Al-Qassam’s armed militants have become Hamas’ de facto statesmen, and the Brigades have become Frankenstein’s monster.

More than ever before, Deif and his people are said to be the leading force in Gaza. And when the movement is at a watershed, as it is now, these power struggles become very significant.

It is doubtful whether the political wing can have the upper hand against the military wing. Despite the strong desire of Hamas’ political leaders to dig themselves out of the deep hole they’re in, it is questionable whether they can implement the hierarchy that is common in many regimes, whereby the political echelon tells the military echelon what to do and the latter abides by it.

Those who are paying the price and likely to continue paying it in the future are the residents of the Gaza Strip. They are captives of the power struggles, caprices and ego wars that are raging within the movement, which once promised them change and reform but has only brought calamity.