The rockets fired against Israel on Monday, just days after rockets were fired on Tel Aviv, prove that Hamas' claim of “a mistake” is false and that it indeed intended to launch the rockets. 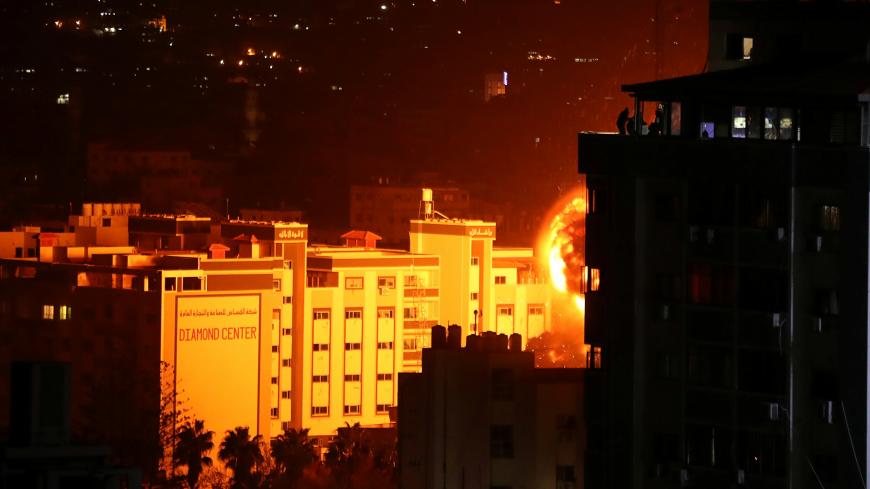 Flame and smoke are seen during an Israeli air strike in Gaza City, March 25, 2019. - REUTERS/Mohammed Salem

Hamas claimed yet again that a missile that demolished a home in central Israel on March 25 was fired from Gaza by mistake, a “mishap” of the sort that occurred March 14 with the firing of two rockets at Tel Aviv. Israelis are no longer buying the explanation and are beginning to realize the attacks were deliberate.

Despite the assessment that Hamas was behind the attack two weeks ago, as I wrote here, Israel was quick to accept the absurd Hamas claim of a malfunction in order to avoid a war with Gaza prior to the April 9 elections. I also wrote that the missiles appeared to be an act of defiance by the military wing over what it views as the political leadership’s misguided policy, which supposedly ignores the Jihad against Israel and is selling out the “resistance” (Muqawama) in order to preserve its hold on power. Senior officials of the armed wing believe that any discussions with Israel are pointless as long as it maintains its siege of the Gaza Strip.

As aforementioned, Israel was taken by surprise once again on Monday when a heavy, long-range missile from Gaza struck a house in the community of Mishmeret northeast of Tel Aviv. Seven people, most members of one family, sustained light to moderate injuries.

But Israel was not the only one surprised by the early morning attack. The political leadership of Hamas, which is seeking to advance a long-term cease-fire deal with Israel, was also caught unaware — just as it was two weeks ago by the firing on Tel Aviv. At the time, an Egyptian delegation was meeting in Gaza with Hamas leaders Ismail Haniyeh and Yahya Sinwar to discuss prospects of a deal with Israel following the elections. They were also talking about a temporary easing of Israel’s blockade to allow residents to let off steam in light of their growing anger over the economic crisis in the Strip, which erupted into violent protests against Hamas in recent days.

Israel is now convinced that Hamas' armed wing, the Izz ad-Din al-Qassam Brigades, no longer accepts the authority of the political leadership. This is an important conclusion for anyone wanting to understand the complex situation within the Islamic movement, and it should serve as a warning flag for Israel’s defense and political authorities ahead of any future long-term deal. In other words: Israel will be able to strike a deal with the movement’s top leadership, such as Haniyeh, Sinwar and Moussa Abu-Marzouk, who serves as the de facto Hamas “foreign minister” in talks with Egypt. Nonetheless, head of al-Qassam Brigades Mohammed al-Deif and the other seniors of the armed wing are the ones calling the shots, and they could sabotage any arrangement with Israel. By their recent actions, they let Israelis know they can fire rockets to targets within a 30-kilometer (18-mile) range — farther than before.

What led to this week’s long-range missile launch? Although the sides continue to discuss a framework agreement and Shin Bet head Nadav Argaman even met in Cairo on March 16 with the head of Egyptian intelligence Abbas Kamel to discuss solutions to the Gaza crisis, the various contacts have not yielded a clear outcome.

Israeli defense officials believe that both rocket attacks this month into central Israel are a result of the unrest that flared up in recent weeks among Palestinian prisoners in Israeli jails after Public Security Minister Gilad Erdan ordered the jamming of their cellphones in a bid to stop phone smuggling into the prisons. The Israel Prison Service and Israel’s security authorities did not object to what Erdan described as a “pilot program” but thought the timing was wrong and could result in an escalation given the tensions in Gaza and the West Bank.

In the evening hours of March 24, two Hamas inmates at the Ketziot Prison in southern Israel stabbed two guards with improvised spikes. Nine Hamas prisoners were injured in the ensuing riot. The missile toward Mishmeret was fired several hours later. The Hamas members jailed in Israel are an integral part of the movement’s military wing, “soldiers” who had sacrificed themselves for the cause. They were now signaling their distress to the leadership over the phone jamming, which for them was the final straw in an Israeli campaign to cut them off from their families.

In January 2018, Israel began reducing the number of permits for Palestinians to visit their relatives jailed in Israel. In October 2018, the Ministerial Committee for Legislation voted for a bill that would ban Red Cross and family visits to Hamas prisoners in light of the continued Hamas refusal to allow Red Cross visits to two Israeli civilians believed held in Gaza. The Knesset gave the bill preliminary approval. In the wake of these developments, Hamas regards the phone jamming as a deliberate attempt to sever contact with their families.

Erdan argues that the prisoners use phones to send instructions for terror attacks against Israelis — a somewhat misleading claim. The phones serve the prisoners mostly to keep in touch with their families and to convey messages — not necessarily terror-related — to Palestinian prisoners in other Israeli jails. Should Israel give in to Hamas inmates and keep ignoring the phone smuggling? Of course not. However, as security officials and prison authorities repeatedly argue, timing is the issue.

Israel is in a bind. The missiles fired from Gaza into the Israeli heartland as an act of provocation expose the helplessness of its military and political echelons. Although Prime Minister Benjamin Netanyahu cut short his visit to Washington and insisted that his timetable would not prevent Israel from taking necessary action against Hamas, it is hard to believe Israel would let itself be drawn into an all-out assault on Gaza two weeks prior to the April 9 elections.

Israel’s 2014 war with Gaza, known as Operation Protective Edge, lasted 50 days. It cost the lives of 2,200 Palestinians and dozens of Israelis, and it badly undermined support for Israel around the world due to the thousands of civilian casualties in Gaza. The Israel Defense Forces was thus careful not to hit Hamas leaders or activists in the bombing raids it conducted in retaliation for the rocket on Mishmeret. The “target bank” it chose — mostly installations, buildings and warehouses — conveyed to Hamas' leadership that the current round of violence could be stopped before it deteriorates into war. Indeed, several hours later Hams announced that a cease-fire was reached with Egyptian mediation. However, it turned out once again that the military wing was refusing to accept the political leadership’s authority, firing some 30 rockets into Gaza border communities.

Another war with Gaza — the fourth since the group took control of the Strip in 2007 — has been averted for now. But Israel realizes more than ever that Hamas is under the control of its military arm, leaving the political leadership helpless with the attendant implications for any future arrangement or agreement with Israel.