A recent round of rocket fire from Gaza and IDF air strikes was followed by an exchange of messages between the two sides and reaffirmation of a commitment by Hamas to try to prevent future rocket fire. 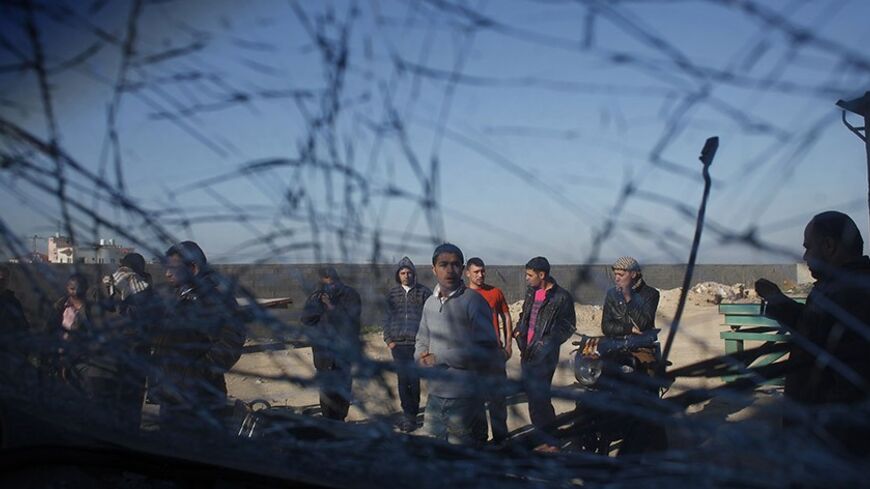 Palestinians are seen through a damaged car window as they look at the scene of an Israeli airstrike in the center of the Gaza Strip, Feb. 9, 2014. - REUTERS/Ibraheem Abu Mustafa

Last weekend, hundreds of members of the Izz ad-Din al-Qassam Brigades, considered Hamas’ elite force, were deployed in Gaza along the Israeli border and assigned an unusual mission. It's doubtful that over the years, anyone in the movement’s leadership had entertained the thought that one day its military wing would be tasked with preventing rocket fire into Israel.

Seeking to maintain the status quo with Israel and thereby avoid another military confrontation, Hamas has a vested interest in stanching the firing of al-Qassam rockets and mortar shells at Israel. The image of the al-Qassam Brigades as the leader of jihad did not previously allow it to perform such a “despicable” task. It did not want other organizations in Gaza to think that it was collaborating with Israel. Now, a so-called Restraining Force has been formed to this end. It is a police force fashioned after the Israeli Border Police, but à la Gaza. The military wing kept its distance from it, but gave its blessings and guidance from the top.

On Feb. 4, however, in an unprecedented sequence of events, Hamas was forced to replace the Restraining Force, as its 900 members abandoned their positions and patrol duties to protest a strike by the Israeli Air Force against them.

Rockets had been fired in early February at the southern Israeli towns Netivot and Ashkelon, as well as at the Eshkol Regional Council and Sha’ar HaNegev Regional Council. This was probably the doing of Islamic Jihad and the Resistance Committees, which at the moment are vying to lead the jihad against Israel. Although all the rockets exploded in uninhabited areas, Israel’s political and military echelons decided to hold Hamas leadership wholly accountable — even though there was no doubt that its militants were uninvolved and even though they actually tried to prevent such fire.

In military terms, accountability means reprisal, and indeed, the Israel Defense Forces (IDF) launched an attack against several targets in the Gaza Strip. According to a statement by an IDF spokesman, ammunition depots in the north and the south of Gaza were destroyed. Sources in Gaza, however, reported that positions of the Restraining Force, whose objective, as noted, is to prevent other organizations from firing at Israel, were also damaged.

In response to the IDF attack, the al-Qassam Brigades instructed the Restraining Force not to deploy along the border. Furthermore, they even planned to fire rockets at Israel to reinstate the balance of deterrence, which they believed had been compromised. The movement’s political wing would not hear of it. Hamas Prime Minister Ismail Haniyeh, political bureau head Khaled Meshaal as well as a host of other leaders in Gaza exerted massive pressure on the al-Qassam fighters. Not only did they prevent rocket fire, they also forced the brigades to embark on the very policing work that they had avoided to begin with, lest their image be tarnished.

Al-Monitor has learned that on the day the Restraining Force abandoned its positions, there were concerns in Israel that this demonstrative act would result in escalation. Jerusalem conveyed a strong message to the Hamas premier via Gaza-based Palestinian businessmen. The latter are not prominent Hamas followers, but they do have connections in Haniyeh's office. In recent months, they have been serving as go-betweens for Hamas and Israel.

The messages Israel conveyed suggested that abandoning the security positions was tantamount to a green light to fire rockets at Israel and that the IDF would react by striking Hamas government installations in a way that would be painful to the movement. Hamas did not take its time replying. Haniyeh’s office complained that the IDF had attacked those who had been tasked with the security assignment. Israel was, in fact, targeting the very people preventing rocket fire.

That Israel and Hamas have almost direct lines of communication is nothing new. Since the movement seized power in Gaza in 2006, Israel and Hamas have occasionally exchanged communiques via Gaza businessmen. The latter are in direct touch with the Israeli civil administration, which issues them exit permits to travel to Israel. Hamas' leadership is fully aware of their ties with Israel and approves of them. To put it differently, no one in Hamas suspects them of collaborating with Israel.

In light of there being no other option, these people have become an acceptable and effective medium for exchanging messages. This was also the case in the matter of the Israeli kidnapped soldier Gilad Shalit. A private channel of communication set up by Gershon Baskin and Ghazi Hamad helped in his release. As noted, messages have also been exchanged this time. Neither side is interested in escalation. Both are all too familiar with the unfortunate outcome of a breakdown in communication. In the current exchange of messages, Israel has pledged not to target the force guarding the border, whereas Hamas has pledged to do more to prevent rocket fire.

Hamas had reached the conclusion that the specially formed Restraining Force could not entirely prevent rocket fire against Israel. As it turns out, its members were reluctant to confront militants from other organizations. As a consequence, the al-Qassam Brigades, the movement’s “elite unit,” was tasked with that mission. Hamas hopes that even if Islamic Jihad and the Popular Resistance Committees or other organizations are able to fire rockets despite the military wing’s vigilant eyes (or cocked weapons), Israel will realize that Hamas is making great efforts to avert such fire. The businessmen also conveyed an explicit message in this spirit to Israel.

The events since the rocket fire two weeks ago suggest that both sides, Israel and Hamas, are trying to find ways to communicate and maintain the status quo, which everyone finds convenient. Once again, it turned out that both sides have better ways of conveying messages other than launching another air strike or firing more rockets.