Is Hamas preparing for long-term truce with Israel?

Hamas’ military wing, Izz ad-Din al-Qassam Brigades, has been implementing a series of military measures signifying a possible truce with Israel, but is not ruling out the possibility of a deadly confrontation. 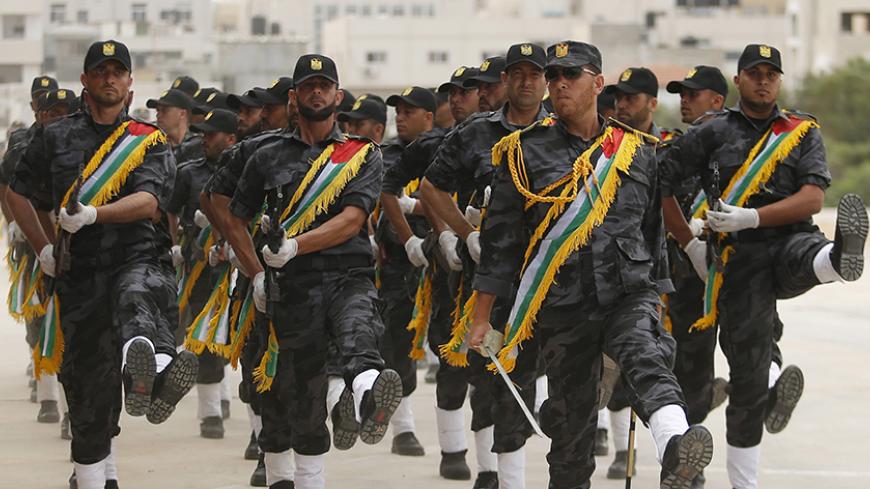 Members of Palestinian security forces loyal to Hamas march during a military graduation ceremony in Gaza City, May 21, 2015. - REUTERS/Suhaib Salem

The cease-fire between Hamas and Israel, which has been in force since August 2014, is maintaining relative calm following the end of the 50-day war on Gaza. No breaches were recorded by either side except for rare incidents, most recently on May 27, when missiles were fired from both the Israeli and Palestinian sides following clashes between Hamas and the Salafists.

However, the Izz ad-Din al-Qassam Brigades, Hamas’ military wing, began taking a series of unprecedented steps in the beginning of 2015 in the confrontation with the Israeli army.

Al-Qassam Brigades have recently implemented extensive missile tests, with the number of test missiles reaching five a day, according to the website Al-Majd, known for its close ties to Hamas.

On March 14, al-Qassam Brigades published photos of military training sites adjacent to the fence separating the Gaza Strip and Israel, which the latter had built following the recent Israeli war on Gaza in the summer of 2014. Hamas announced that the sites are a defiant message to Israel, and that they are being continuously developed and expanded so as to have all it takes to train Hamas fighters.

On May 6, Hamas allowed hundreds of Palestinians from Gaza to get very close to the Israeli borders, providing them with military binoculars to look clearly at the Israeli settlements. Issam Adwan, head of the Hamas-affiliated Refugee Affairs Department, said that Hamas did this to materialize the Palestinian dream of returning to the occupied territories.

Yet, Hamas’ military movement culminated with al-Qassam Brigades' decision to send bulldozers and trucks May 23 to pave a road 250 meters (0.16 miles) away from the fence separating Gaza and Israel.

It seems as if Hamas, which has kept silent on al-Qassam Brigades' moves, is now trying to find a balance between deterring the Israeli army and beginning to slowly shift from secretive operations to public work. It seems like al-Qassam Brigades is also trying to strengthen its legitimacy in any political agreements signed with Israel and wishing to boost the morale of Gazans, who were affected by the last war.

The most interesting part of al-Qassam Brigades' latest move is that it is getting closer to Israeli army positions. Al-Monitor closely followed up on these developments during a field visit May 2 to the region. It seems as if Hamas wants to stress that Israel no longer has the upper hand in Gaza.

Al-Monitor was informed by Hamas officials, who spoke on condition of anonymity, about the talks happening within the organization.

“Al-Qassam [Brigades'] latest movements aim at collecting intelligence information on the Israeli army locations beyond Gaza’s border and to increase Hamas fighters’ audacity to confront [Israel]. This is not to mention facilitating al-Qassam [Brigades'] patrols on the border alongside Israel’s patrols and to establish electronic military barracks to monitor the border,” the officials said.

Hamad al-Ruqb, spokesperson for Hamas, confirmed these reports May 26. He said that paving the road on the border aims to protect the Gaza Strip against any breach on the part of the Israelis and to sever communication between collaborators and Israeli intelligence. This is also to train fighters in al-Qassam Brigades to be official army units so that they can fight as an (official) Palestinian army against Israel in the future.

According to Hamas clandestine discussions, which Al-Monitor was informed about, “Al-Qassam [Brigades'] moves aim at putting an end to Israel’s security restrictions on eastern Gaza. Hamas’ military wing seeks to keep the Israeli army at 300 meters [0.2 miles] away from the border in the east, to protect farmers on their lands, facilitate tunneling and protect drill sites to the nearest point of the border to save time and effort.”

Al-Qassam Brigades did not comment officially on these military procedures. Meanwhile, some of the group’s political members spoke to Hamas about these latest developments.

Fathi Hamad, a member of Hamas’ political bureau and former interior minister, said May 30 that al-Qassam Brigades seeks to attack the Israeli army through the (newly paved) border road when the right opportunity presents itself.

Ismail al-Ashqar, chairman of Hamas Palestinian Legislative Council's Security Committee, told Al-Monitor, “Al-Qassam [Brigades'] military moves are a way to deter Israel from attacking Gaza, and to convey a message that Gaza will not be occupied again. The group’s latest field measures send a message that it [al-Qassam Brigades] is ready for any future fighting round with Israel.”

Al-Monitor also spoke with a senior official from the office of Palestinian President Mahmoud Abbas, who spoke on condition of anonymity.

“With these military measures, Hamas has started to separate Gaza from the West Bank, which is further reflected by the newly paved road on the eastern border with Israel, as this pathway is similar to all other safe roads on the border between the countries,” he said.

Ashqar added, “The latest military measures Hamas took at the Gaza border fall within the context of a long-term truce with Israel and to serve the interests of a separate [Palestinian] state in Gaza. The border road is a way to facilitate the maintaining of the truce. With this move, Hamas is taking up the role of an [official] army protecting the border.”

For his part, spokesperson for Fatah, Jihad al-Harazin, said to the Free Palestine Agency on May 28 that Hamas is coordinating with Israel to turn the new border road into a cease-fire line, confirming the project of an enclave in Gaza.

Regardless of the nature of Hamas’ recent military measures at the border with Israel, those remain a prelude to constructing a new reality in the Gaza Strip, where Hamas’ position as a military force in the face of Israel would be reinforced, as it has recovered from the 2014 summer war in Gaza.

This suggests that the countdown for a new confrontation has begun, especially since the Israeli army is unlikely to allow any presence of Hamas fighters deployed hundreds of meters away from its sites. The military deployment on the part of al-Qassam Brigades is a message of defiance, which is hard to ignore.

Nevertheless, these military movements could also be an introduction to a long-term truce with Israel in Gaza in an attempt to facilitate the reconstruction process, lifting the blockade and giving Palestinians the chance to catch their breath after three consecutive destructive wars.

The security situation in the field points to the fact that Hamas is going in the direction of entrenching a possible truce with Israel and establishing calm, despite some breaches (on the part of Israel), which the Gaza Strip experienced in early June. Israel struck a number of camps belonging to Hamas in response to missiles that the Salafists had launched. For its part, Hamas stood still to show its wish to avoid escalating military developments.