Why Hamas did not claim recent attacks on Israeli army

Hamas did not claim responsibility for a recent attack against the Israeli army at the Gaza border, which could be explained by the fact that the movement does not want to jeopardize the talks on the truce with Israel. 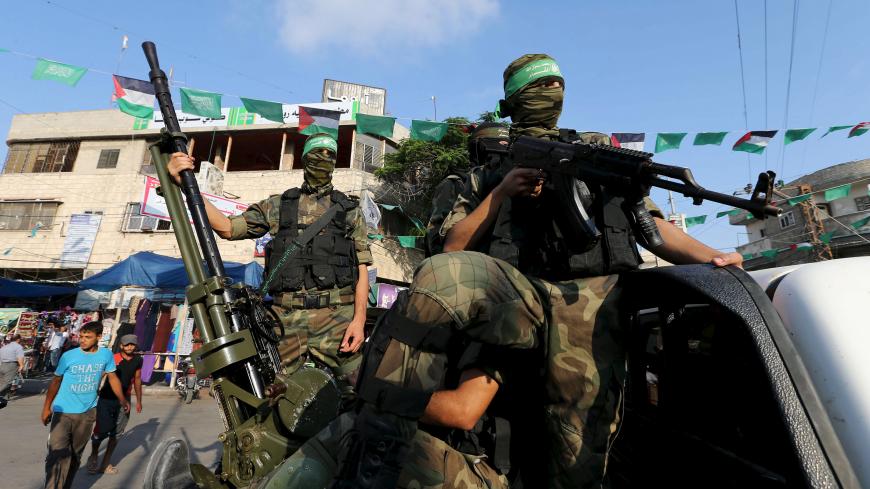 GAZA CITY, Gaza Strip — At dawn on Aug. 10, the Israeli army killed four Palestinian gunmen who were trying to cross the border in the central Gaza Strip.

A statement by the Israeli military published by Haaretz on the same day said the four men were heavily armed with assault rifles, anti-tank missiles and hand grenades.

Israel Defense Forces spokesman Brig. Gen. Ronen Manelis said in the statement that "a very large attack" has been thwarted, noting that all four gunmen were wearing military uniforms and lashing out at Hamas for not making any efforts to prevent militants from crossing the border.

No Palestinian organization claimed responsibility for this attack on the Israeli army. Hamas did not praise it in its statement on the same day, asserting that the continued Israeli blockade of the Gaza Strip is pushing young people to "react individually” against the siege.

The incident came a few days after Hani Abu Salah, a member of Izz ad-Din al-Qassam Brigades field control unit — which is responsible for preventing border infiltration from Gaza to Israel — infiltrated the borders east of Khan Yunis, in southern Gaza wearing al-Qassam Brigades military uniform. Carrying a Kalashnikov and hand grenades, he clashed with an Israeli unit on Aug. 1. As a result of the shootout, an officer and two Israeli soldiers were wounded and Abu Salah was killed, according to the Israeli Yedioth Ahronoth website. The newspaper cited Manelis as saying, “Abu Salah conducted the operation unilaterally, and al-Qassam Brigades did not give the orders.”

Neither Hamas nor its military wing had claimed responsibility for this operation. Hamas also did not issue any statement mourning the attacker. This stirred questions why it did not praise these operations against the Israeli army, which was seen as an unprecedented measure.

A few hours before the incident, the Israeli army had announced completing a four-day military training in the Gaza envelope as part of a preparation plan for a possible war on Hamas in Gaza.

Russia Today cited Israeli sources Aug. 4 saying that Israel asked Hamas in a message transmitted through mediators to deploy its members on the Gaza borders to prevent any Palestinians from infiltrating.

On Aug. 2, Hamas had deployed its security members at a close distance to the border fence to prevent protesters from getting near it during their weekly border protest, amid ongoing Egyptian efforts to seal the truce agreement that was signed between Hamas and Israel in March.

The first phase of the truce agreement binds Israel to send diesel fuel to the Gaza power plant and expand the fishing zone to 15 nautical miles facing the Gaza Strip coast. The second phase involves establishing two industrial cities on the northeastern side of the Gaza Strip to employ 15,000 Palestinians, and allow the entry of more than 60 types of raw materials that Israel did not allow into Gaza for years for being of dual use (civilian and military).

As per the agreement, Hamas would halt all military operations against Israel.

Hamas leader Yahya Moussa told Al-Monitor, “The fact that the resistance factions did not recognize these operations is an exception linked to the [sensitive] phase we are undergoing amid serious efforts to uphold the truce agreement.”

Moussa noted that Hamas suspended its military operations against Israel to give a chance for the efforts to be successful. For that reason, it did not claim responsibility for Abu Salah’s unilateral operation.

A military member of al-Qassam Brigades in Khan Yunis city told Al-Monitor on condition of anonymity, “Part of al-Qassam Brigades' fighters are not comfortable with Hamas’ political leadership clinging to the truce option with Israel, which has been reneging on its commitments in this agreement.”

Hamas has accused the Israeli government of stalling in implementing its obligations under the truce agreement. Israel still prohibits the entry of products and raw materials that have been banned from entering the Gaza Strip over the past years under the pretext of dual use.

The military leader noted that, despite talk about development in the truce agreement, this dissatisfaction among al-Qassam Brigades members escalated when Hamas refrained from responding militarily to the Israeli army’s killing July 11 of al-Qassam fighter Mahmoud al-Adham on the border fence in the north of the Gaza Strip. Israel admitted at the time that it had mistakenly killed Adham.

He noted that the military leadership of Hamas is fully committed to the statements of its political leadership and denied any divisions within al-Qassam Brigades regarding the truce with Israel.

He expressed concern about other resistance members repeating such attacks against Israel unilaterally without getting permission from the military command, in case Israel continues to slacken in implementing the truce agreement.

Iyad al-Qarra, political analyst and writer at the Hamas-affiliated Felesteen newspaper, told Al-Monitor, “Hamas does not encourage or want unilateral military operations and it rejects such actions by its members.”

Qarra noted that Hamas did not want to claim responsibility for the operation out of fear of a new confrontation with Israel. He added, “Clearly, these individual operations were not wanted given the ongoing Egyptian efforts to complete the truce.”

He said it is likely that Hamas members in Gaza will implement unilateral operations against the Israeli army because factions have not responded to the Israeli army’s shooting at protesters during the weekly protests on the Gaza borders.

Talal Okal, journalist and political analyst at Al-Ayam newspaper in the Gaza Strip, told Al-Monitor, “Hamas and Israel do not want military escalation given the ongoing truce efforts and preparations to hold Israeli elections in September.”

He added, “This explains why Israel understood the reason Hamas did not claim responsibility for these operations or praise the perpetrators.”

Okal noted that the perpetrators implemented theses attacks as “a form of defiance to Hamas’ inclination to a truce with Israel.” He indicated that it is probable these operations might encourage other resistance members to attack the Israeli army unilaterally.

Okal concluded, “It is unlikely that the situation will remain in limbo between no war and no peace, amid talk about a truce without the presence of a real truce. The possibility of a new military escalation between Hamas and Israel is increasing.”