How will Hamas react to Israel’s admission of error in killing of militant?

Israel admitted that it mistakenly killed a Hamas operative near the border fence with Gaza, a move that Palestinians did not accept — although Hamas seems to have delayed retaliation to allow Israel to commit to the truce understandings. 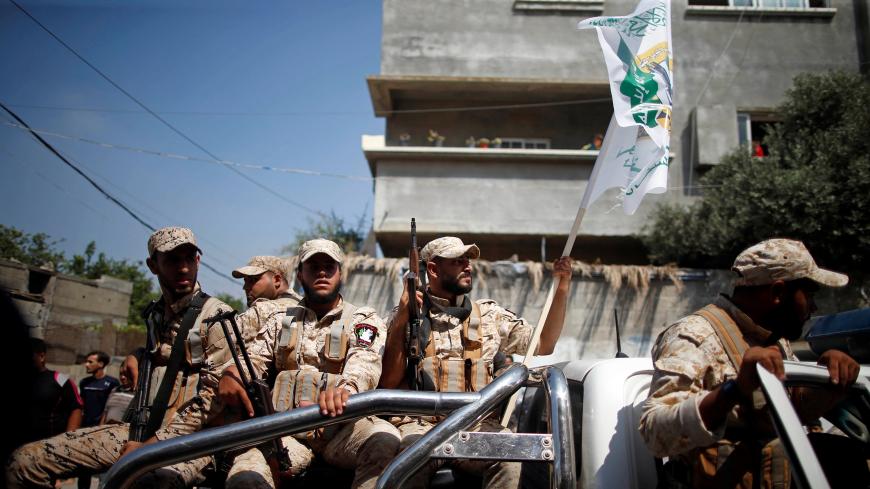 GAZA CITY, Gaza Strip — In a move unprecedented in the history of the Israeli-Palestinian conflict, the Israeli army has admitted it mistakenly killed a Hamas member near the Israeli border in the north of the Gaza Strip on July 11.

Israeli army spokesperson Avichay Adraee tweeted July 11, “In the morning, an [Israeli] unit detected the presence of several Palestinians at the border fence area in the north of the Gaza Strip. Preliminary investigations show that an operative in the Hamas-affiliated field control unit arrived in the area following Palestinian movement adjacent to him, and it later appeared that the [Israeli] unit mistook him for an armed vandal and shot him down due to this misunderstanding. More will follow about the investigation.”

The Hamas operative was a member of a security unit in charge of controlling the border and preventing any Palestinians from infiltrating into Israel.

The Izz ad-Din al-Qassam Brigades, Hamas’ military wing, rejected the admission of error and said in a statement July 11 that the Israeli army deliberately shot at one of their members, identified as Mahmoud al-Adham. The statement also said, “We are examining and evaluating this Zionist crime, and we assure you it will not pass unnoticed. The enemy will bear the brunt of its criminal act.”

Following Hamas’ threat, the Israeli army deployed more forces along the border with the Gaza Strip.

An Egyptian security delegation arrived in Gaza on July 12 to inspect the incident following a stop in Israel. The Egyptian delegation that arrived in Gaza relayed to Hamas officials Israel’s view about the incident and explained that the Hamas member was mistakenly killed. The delegation also informed Hamas that Israel wants to advance the truce understandings reached in October 2018 and does not seek any military escalation.

Israeli Prime Minister Benjamin Netanyahu, who is seeking to avoid any military escalation in Gaza before the upcoming Israeli elections, said of the July 11 incident, “I prefer a truce, but we are getting ready for a sudden and wide-scale campaign in Gaza — I cannot explain more.”

In an additional attempt to contain Hamas’ anger and prevent a potential violent reaction to the killing of one its members, Israel gave the Egyptian delegation several economic incentives to present to the Gaza Strip. Those incentives include expediting the entry of construction material and tools needed to build a hospital in northern Gaza, allowing the entry of Qatari funds to build the industrial zone in eastern Gaza and speeding up the launching of a power line from Israel to the Strip.

Hamas leader Hammad al-Reqeb told Al-Monitor that Hamas cannot accept an admission of error "for Palestinian blood that Israel spilled. Palestinian blood is sacred, and we cannot discuss the response methods or dates in the media.”

He said that responding to Adham’s killing has nothing to do with the truce understandings and indicated that Hamas gave the Egyptian, Qatari and UN mediators a new chance to get Israel to commit to the truce conditions — although the time frames to implement these understandings ended a while ago and Israel only respected a few of them.

Reqeb said Hamas and Palestinian factions cannot accept that the economic and humanitarian conditions in the Gaza Strip remain as they are. He gave Israel an ultimatum: Either it abides by the truce understandings or suffers the consequences of the return of popular Palestinian resistance tools, such as border clashes with the Israeli army and incendiary balloons, among others.

For his part, Islamic Jihad leader Ahmad al-Mudalal told Al-Monitor that the Palestinian factions cannot stand idle when Palestinian blood is spilled. He underlined that responding to the killing of Adham is still on the table, but it is linked to Palestinian factions’ evaluation of the proper timing.

He said Palestinian factions will not give Netanyahu a chance to make any electoral gains at the expense of Palestinian blood.

Mudalal said Israel does not want to give Hamas additional reasons to respond to the killing of one of its members. Therefore, the Israeli army did not adopt its usual habit of responding by attacking Gaza when two rockets were launched from the enclave toward southern Israel on July 12.

The director of the Palestinian Center for Policy Research and Strategic Studies (Masarat), Salah Abdel Ati, told Al-Monitor that the field and humanitarian situation in the Gaza Strip is hanging by a thread. He said the Israeli admission that it had made a mistake is not enough to convince Hamas and the factions not to respond militarily to the killing of an operative.

He added that the Palestinian factions have not yet responded because they want to send a message to the mediators and Israel that they want calm. At the same time, they will not accept the ongoing blockade on the Gaza Strip.

Qarra said Hamas and Israel are both ready for a sudden attack from the other. He believes Hamas is only delaying the retaliation against the killing of one of its members.

Israel seems to have understood that Hamas did not accept the admission of error, and the Israeli army is still on alert along the border with Gaza. Meanwhile, Israeli military vehicles continue to build sand barriers near military locations in Gaza to protect themselves from Hamas rockets.