As Israel is making economic concessions in the Gaza Strip, sporadic rockets continue to be launched from the enclave, prompting Israel to threaten to end all concessions. 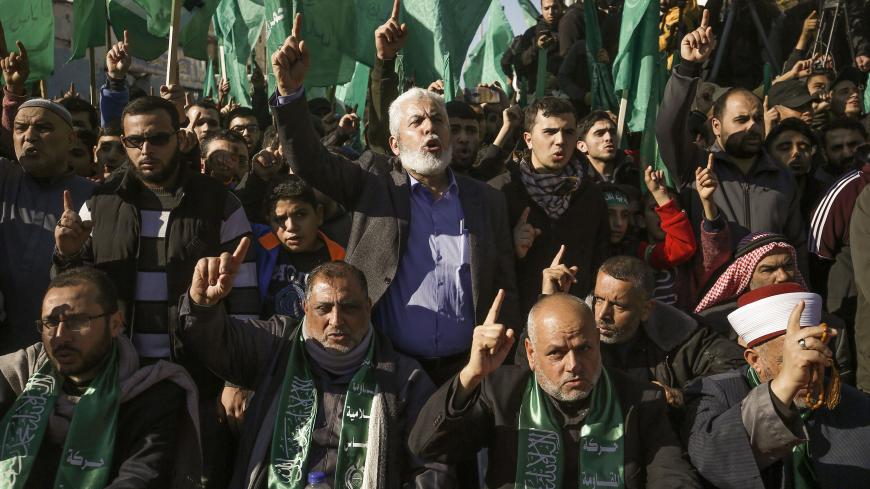 Palestinian supporters of the Hamas movement attend a rally calling for the recognition of Jerusalem as the capital of the future Palestinian state, Gaza City, Gaza Strip, Jan. 3, 2020. - MOHAMMED ABED/AFP via Getty Images

GAZA CITY, Gaza Strip — Israel contacted the Egyptian intelligence Dec. 30, warning against Hamas firing rockets from the Gaza Strip into Israel and vowing to go back on all the recent economic concessions it made to Gaza under the truce understandings reached by Egypt between the two parties, at the end of March 2019, an Egyptian parliamentarian close to the Egyptian intelligence services told Al-Monitor on condition of anonymity.

The most recent rockets were fired Dec. 25. Israel responded by launching several raids on the Gaza Strip at dawn Dec. 26, targeting several positions of the Palestinian armed factions in the north, center and south of Gaza without reporting any casualties.

Yet Israel considers that any Palestinian rocket launching toward it, even if Hamas is not directly responsible, is a violation of the truce understandings and is enough to disrupt it.

On Dec. 30, Israel decided to import strawberries, tomatoes and eggplant from the Gaza Strip to support its local markets, for the first time since a ban imposed several years ago. It decided at the same time to introduce transportation buses and fishing boats to Gaza, in addition to rubber tires, which had been banned since April 2018.

These new concessions came after the Higher National Commission for the Great March of Return and Breaking the Siege, supervised by the Palestinian factions, most notably Hamas, announced during a press conference held in Gaza City Dec. 26 that it decided to halt the marches of return that it organized on a weekly basis on the eastern border with Israel, for a period of three months, and then only resume monthly marches beginning in March 2020.

The Egyptian parliamentarian noted that Egypt believes Hamas and Israel are taking positive steps to make sure the truce is a success, “but firing more indiscriminate rockets toward Israel would disturb and sabotage this truce.”

On Dec. 2, while laying the foundation stone for the construction of 12 new factories in Ashkelon, Israeli Prime Minister Benjamin Netanyahu said, “There will be no long-term settlement with Gaza, as long as the sporadic rocket launching continues.”

Hamas leader Yahya Moussa told Al-Monitor, “The Israeli warnings have no value and we do not take them into consideration. What we take into account is Israel's commitment to the truce understandings, which means stopping the targeting of our people in the Gaza Strip and breaking the blockade it imposed.”

Speaking about whether or not Hamas was able to prevent the firing of rockets from Gaza into Israel, Moussa said, “Rockets can be fired individually by any given faction and they usually come in response to an Israeli aggression against our people; Hamas is not a police force working to protect Israel from these rockets. It must not target our people in order to avoid these rockets.”

Islamic Jihad leader Ahmad al-Mudallal told Al-Monitor, “The Israeli warnings aim to cover up the ongoing Israeli attempts to avoid implementing the understandings of breaking the siege [the truce].”

He explained that the recent concessions are part of the understandings, “while Israel continues to ignore the implementation of the remaining provisions of the understandings — the most important of which is to allow the establishment of major projects in Gaza such as the industrial zone in the east, and to facilitate citizens’ movement through the Erez crossing and the entry of goods through the Karam Abu Salem crossing.”

Mudallal added, “The Islamic Jihad’s position on the truce understandings is clear; we are committed to them so long as Israel is.”

Iyad al-Qarra, a political writer and analyst and former editor-in-chief of Felesteen newspaper in Gaza, told Al-Monitor, “Hamas is interested in implementing the truce understandings and has taken measures to make it succeed, the most important of which is limiting the marches of return on the Gaza border and objecting to launching indiscriminate rockets, individually [by some factions] without national consensus.”

He believes that Hamas and Islamic Jihad have started rejecting indiscriminate rocket launches individually outside the national consensus, after the meeting Egypt organized between the leaders of the two movements in Cairo on Dec. 3, 2019.

Qarra ruled out any talk of a long-term truce between Hamas and Israel at the present time, saying, “Instability currently prevails at the Israeli and Palestinian levels, and this prevents talk on a long-term truce. Israel is heading toward a third election, and the Palestinian street is also awaiting general elections that may lead to major political changes. Meanwhile, Hamas is waiting to see where things could go given the recent developments in the region after the United States assassinated the second most powerful person in Iran — Qasem Soleimani — in Baghdad on Jan. 3.”

Wadih Abu Nassar, a political analyst and expert on Israeli affairs and director of the International Center for Consultations in Haifa, told Al-Monitor, “Israel believes a truce is the best option in dealing with the resistance in the Gaza Strip at the present time — for several reasons, namely in order to set the stage for talks to conclude a new prisoner exchange deal with Hamas and to provide sufficient opportunity to complete the construction of the separation barrier that Israel began building in September 2016 — along its borders with Gaza — to eliminate the resistance’s tunnels.”

Abu Nassar said that Israel also wants calm with the Gaza Strip at this particular time to focus more on the northern front where the chances of a military confrontation with Israel escalate, especially after Soleimani's assassination.

Qarra believes that Hamas is absolutely not interested in being part of the confrontation that may occur between Iran and the United States due to Soleimani’s assassination.

Talal Okal, a political analyst for the Ramallah-based newspaper Al-Ayyam, told Al-Monitor, “The truce between Gaza and Israel has become a reality on the ground. On the Palestinian side, military activities have been stopped and the marches of return halted. On Israel’s part, economic concessions have been made and permission has been given for some previously banned materials to enter the Gaza Strip.”

He noted that firing indiscriminate and individual rockets into Israel “indicates the presence of small groups [without naming any] operating in the dark concerned with sabotaging this truce in order to destabilize Hamas’ rule in Gaza.”

Okal added, “Still, I do believe that Hamas is able — to a great extent — to stop the indiscriminate rocket fire against Israel, but sometimes it does not take sufficient measures to stop it so as to pressure Israel not to renounce the truce understandings.”