Hamas has resumed incendiary balloons flown across the border to pressure Israel to execute the truce understandings after a month of calm since Hamas halted its weekly protests along the Israeli-Gaza border. 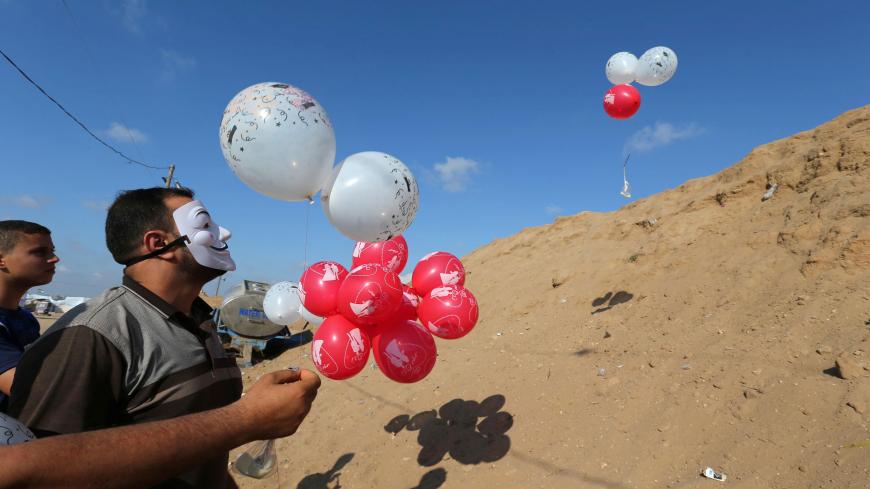 Palestinians fly balloons loaded with flammable material to be thrown at the Israeli side, near the Israel-Gaza border in the central Gaza Strip, June 4, 2018. - REUTERS/Ibraheem Abu Mustafa

GAZA CITY, Gaza Strip — Tension on both sides of the border between the Gaza Strip and Israel has returned in the wake of Hamas resuming since Jan. 15 the use of incendiary and explosive-laden balloons toward southern Israel.

The so-called night confusion units of the Palestinian resistance factions also resumed their activities along the eastern border on Jan. 19, in an attempt to pressure Israel to move forward with the truce understandings brokered by Egyptian, Qatari and international mediation in October 2018.

Incendiary and explosive balloons are balloons fitted with flammable materials to cause fires in Israeli agricultural fields near the Gaza Strip. They can also be attached to small explosive charges to make loud explosion sounds that disturb the Israeli army along the border with Gaza. Meanwhile, the night confusion units consist of dozens of youths who detonate huge sound bombs near the Israeli army's posts in the eastern Gaza Strip at night, in order to disturb them.

Hamas accuses Israel of lagging in implementing the truce understandings. Israel has not yet established the industrial zone east of Gaza City, or started to supply the gas line that will feed the only power plant in Gaza. Also, it has yet to allow freedom of movement and the entry of goods through its crossings with the Gaza Strip, or allow funds into the besieged enclave.

Palestinian factions have resorted to rough tools again after they felt Israel’s lack of seriousness about the understandings. These factions had halted the marches of return on Dec. 26, 2019, for a period of three months, in the hope that Israel would make great and convincing steps in implementing the understandings. Yet Israel only provided some concessions that were not enough to convince Hamas. It expanded the fishing area and allowed the entry of logistical equipment to build the US field hospital in the northern Gaza Strip and the export of some Palestinian products to the Gulf states.

Israel tried to rein in the Palestinian groups that fire incendiary and explosive balloons. On Jan. 16, Israeli planes bombed a location used by those groups to launch them. This attempt failed and Palestinian groups stepped up their balloon attacks, prompting Israel on Jan. 20 to threaten Hamas to take military action if balloons keep coming.

A Palestinian young man who leads a group that launches incendiary balloons and who takes part in the night confusion activities talked to Al-Monitor on condition of anonmity for security reasons. “As long as Israel does not adhere to the timetable for implementing the understandings, neither the balloons nor the night confusion will stop,” he said. “We gave Israel too much time to break the blockade, but it did not do anything about it, so we will not stop until we see actual results.”

Yahya Moussa, head of the Palestinian Legislative Council Oversight Committee and a senior Hamas political leader, told Al-Monitor, “Israel only understands the language of force. For over a year it has been delaying the implementation of the truce understandings, which are the most basic rights of the Palestinians trapped in the Gaza Strip.”

Moussa pointed out that international law gives them the right to use any method to defend themselves and regain their rights, which they have been deprived of due to the 13-year Israeli blockade of the Gaza Strip. “The escalation or cessation of use of rough tools depends on Israel’s behavior and whether it moves forward with the understandings or delays some more.”

Talal Abu Zarifa, member of the Higher National Commission for the Great March of Return, told Al-Monitor that Israel wants to consolidate the equation of calm in exchange for calm only, and not calm in exchange for breaking the siege on the Gaza Strip. He said that the Palestinian factions cannot accept that.

Abu Zarifa warned that the Palestinian factions could use all methods to escalate their field actions toward Israel. “The mediators' efforts did not succeed in pressuring Israel to implement the previously agreed upon understandings,” he added.

The escalating tension on both sides of the border resulted in the death of three Palestinian youths on Jan. 21 in the southern Gaza Strip. The Israeli army said that the three had attempted to infiltrate across the border toward Israel to carry out an attack against its forces, before it shot them dead.

Talal Okal, political analyst and writer for the Ramallah-based newspaper Al-Ayyam, told Al-Monitor that Hamas’ use of rough tools, particularly incendiary balloons and night confusion, came after talks between the two sides through mediators reached a dead end. “The factions accepted in December 2019 to halt the marches of return in exchange for promises made by Egypt to pressure Israel to advance in the truce understandings,” he noted.

He argued that the Palestinian factions believed that completely stopping the marches of return and no longer using rough tools in recent weeks encouraged Israel to delay the implementation of the understandings.

Iyad al-Qara, an author and a political analyst for the daily newspaper Felesteen in Gaza, said the current conditions between Hamas and Israel are set for a further escalation in the coming days, unless mediators quickly fix matters between the two sides.

Qara ruled out in an interview with Al-Monitor the possibility of calm being restored between the two sides unless Israel took real and convincing steps toward Hamas. He said, “The Palestinians in the Gaza Strip are suffering in the absence of a large part of the most basic elements of life, as they most recently endured lack of cooking gas.”

The Israeli and Palestinian parties are awaiting what the coming hours will bring. Sources close to Hamas told Al-Monitor that Egypt is making intense efforts to contain the tension between the two sides, while Israel allowed on Jan. 22 the entry of millions of dollars to the Gaza Strip to be distributed to poor families.