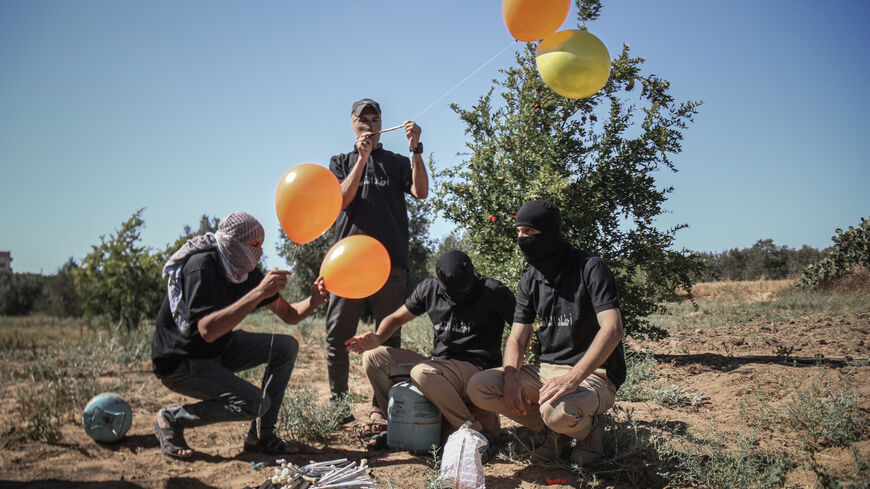 GAZA CITY, Gaza Strip — Only two days into the term of the new Israeli government, tensions flared in Gaza as Hamas-linked groups resumed sending incendiary balloons towards Israel, with the latter responding with strikes on the coastal enclave.

On June 15, groups affiliated with the Palestinian factions in the Gaza Strip launched hundreds of these balloons toward southern Israel. The factions said the move came in response to the controversial flag march held by far-right Israeli nationalists in Jerusalem, and in light of Israel’s ongoing decision not to release the Qatari financial grants and to ban the entry of many goods through Gaza’s crossing since the end of the recent round of violence May 21.

In response to the balloon launches that caused 18 fires to break out in Israeli agricultural fields near the Gaza border, Israel bombed two Hamas military sites in Gaza City and Khan Yunis at dawn June 16. No injuries were reported.

On June 15, the so-called “night confusion units” began their activities along the fence separating Israel and the Gaza Strip, disturbing Israeli soldiers along the border by burning tires and detonating sound bombs, prompting the soldiers to open fire and wounding a member of the groups in eastern Khan Yunis.

On June 16, Doron Kadosh, a journalist at Israeli Army Radio, quoted an unnamed Israeli official as saying that Israel had conveyed a message to Egypt stating that if Hamas was behind the incendiary balloons, this would jeopardize the talks for a long-term truce with Gaza.

Hamad al-Ragab, a Hamas leader, told A-Monitor that the incendiary balloons and the night confusion units’ actions serve as a warning message to Israel that things could escalate again should Israel carry on with its provocative actions in Jerusalem and its ongoing economic pressure on the Gaza Strip.

He stressed that his movement “cannot remain idle amid Israel’s measures in Jerusalem,” especially since Israeli far-right nationalists “continue to storm Al-Aqsa Mosque, not to mention the attempt to forcibly evict the people in [Jerusalem neighborhoods of] Sheik Jarrah, Silwan and Batn al-Hawa. And Hamas cannot keep silently watching the suffering of Gaza’s people.”

Ragab added that Egypt, which mediated a cease-fire between Israel and the Palestinian factions May 20, continues to communicate with Hamas’ leadership and to pressure Israel in order to keep the calm in place, return to the status quo prior to May 10, and to ease the blockade on the coastal enclave.

In a press conference May 26, Yahya al-Sinwar, Hamas’ chief in the Gaza Strip, warned that Israel’s ongoing actions in Jerusalem could risk sparking a major religious war in the region.

The Palestinian factions in Gaza see the incendiary balloons and the night confusion units’ tactics as a means to pressure Israel to lift the siege on Gaza. Similar tactics were seen as proving effective at the end of 2018, when both sides reached understandings, and Israel was forced to ease the blockade by allowing Qatari funds to enter the besieged enclave, in addition to the entry of most goods and facilitating people’s movements through the crossings.

Walid, who refused to provide his last name for fear of reprisal, is one of the people engaged in firing the incendiary balloons among the night confusion units. He told Al-Monitor that the groups will escalate things if Israel continues to tighten the noose on Gaza, preventing the entry of commodities, notably construction materials, and denying Gaza the Qatari funds.

He said that dozens of people are engaged in these activities along the border with Israel, and warned that activities will increase and that more people will get involved in the coming days if Israel continues to turn a deaf ear to the Palestinian demands.

Mustapha al-Sawwaf, a political analyst and former editor-in-chief of the local Felesteen newspaper, told Al-Monitor that while these tactics aim to put pressure on Israel, "no military escalation is expected.”

He predicted that the Palestinian actions, alongside the mediation efforts of Egypt and Qatar, would at some point succeed in pressuring Israel into easing the blockade and restoring the status quo that existed before May 10, in order to prevent a new military venture.