Egypt proves itself a reliable mediator to Palestinians

Maj. Gen. Ahmed Abdel Khalek, the Egyptian intelligence officer in charge of Cairo's Palestinian portfolio, made an unprecedented appearance to pay respects to the families of Izz ad-Din al-Qassam Brigade fighters killed in clashes with Israel. 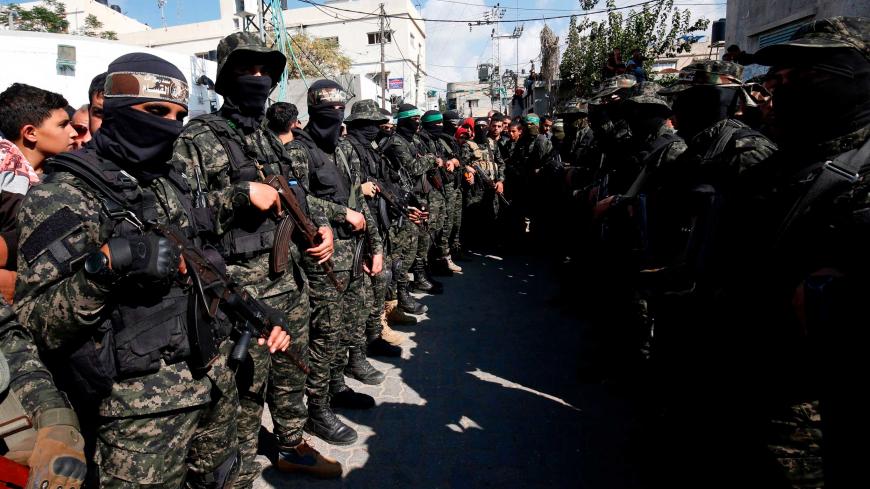 Upon arriving at the Hamas event, Abdel Khalek shook the hands of the movement's political and military leaders, among them Yahya al-Sinwar, who leads the group in Gaza. He then kissed the hands of the children of the deceased. Having paid his respects, the Egyptian then left. His brief appearance at a Hamas event was an unprecedented gesture by an Egyptian official, leading many to speculate about the reasons behind it.

After two days of violence, Nov. 11-13, Egypt had successfully brokered a cease-fire between Hamas and Israel, bringing a quick end to the fiercest military confrontation between them since their 2014 war.

An official for the Egyptian General Intelligence Services who spoke to Al-Monitor on the condition of anonymity, said, “Abdel Khalek’s participation in the funeral was not pre-planned, but he decided to take this step within the framework of Egyptian reactions protesting Israel’s recent aggression against Gaza. Egypt believes Israel provoked the recent escalation.”

He further explained, “Egypt considered the undertaking of the Israeli operation an insult to its ongoing efforts to ratify a genuine truce between the resistance and Israel. Egypt sent a written letter of protest that Abdel Khalek carried to Israel shortly before his visit to Gaza, to ensure that such an act would not be repeated.”

He added, “The letter carried an Egyptian demand to Israel to stop provoking Hamas by targeting its fighters, who do not currently threaten it, and to proceed with the truce efforts.”

The Egyptian official claimed that Abdel Khalek’s appearance at the funerals was aimed at showing Hamas and other Palestinians that Egypt is playing a transparent role in the truce effort and that it will not side with Israel at the expense of Gaza or lifting the Israeli blockade ongoing since 2007. Egypt and the United Nations have been heading a negotiating effort since July 2018 to establish a truce between Israel and Hamas, at which time the siege would be lifted.

Ismail Radwan, a leading member of Hamas, told the Hamas-affiliated Felesteen newspaper on Nov. 18 that the negotiations are geared at “lifting the blockade completely, halting Israeli aggression on Gaza, expanding the fishing [zone],… improving power supplies to Gaza, facilitating the movement of citizens and merchandise through the crossings and encouraging the free flow of export products, the reconstruction of Gaza and implementing relief and development projects in the Gaza Strip.”

Egypt's efforts have already succeeded in obtaining some relief for Gaza, such as Israel agreeing to the entry of Qatari-supplied fuel on Oct. 9 to operate power plant generators. As a result, residents now have electricity for up to eight continuous hours a day, compared to barely four hours before the shipment. On Oct. 31, Israel expanded the fishing zone off the Gaza coast to nine nautical miles, compared to six previously. In another development, despite the ongoing Great Return March on the Israel-Gaza border, the number of incendiary balloons and kites launched from Gaza into Israel are reported to have dropped significantly in the past few weeks.

According to the Egyptian intelligence official, “Egypt will continue its efforts until all Palestinian demands are met. Egypt hopes to instill lasting peace between Gaza and Israel through conciliation.”

Another Hamas leader, Yahya Moussa, called Abdel Khalek’s gesture “proof of the improving relations between us and Egypt, which is playing a decent role as mediator in reaching conciliation with Israel.”

Moussa described the Israeli infiltration into Gaza as “insidious,” adding, “Israel has disregarded the Egyptian efforts while we remain committed to refraining from any military act against Israel, out of respect for Egypt’s endeavors. But, we will break our commitment and defend ourselves, at the first hint of Israeli aggression against Gaza.”

Talal Okal, a political analyst and writer for the Palestinian newspaper Al-Ayam, told Al-Monitor, “Egypt considered Israel’s secret infiltration of Gaza and killing of Al-Qassam fighters an insult to its mediation and as undermining its efforts to cement a conciliation. Egypt’s participation in the funeral procession aims at returning the insult to Israel.”

Okal added, “[This act] proves Egypt’s decency as a broker, unlike US mediation between the Palestinian [leadership] and Israel, which repeatedly showed complete bias toward Israel.”

Mostafa al-Sawaf, a political writer and analyst for Felesteen, sees Abdel Khalek’s visit to the procession as “balanced.” Sawaf explained to Al-Monitor, “He paid his respects to the families, then left without attending the whole ceremony, to avoid angering Israel.”

Sawaf also claimed that Abdel Khalek's action heralds a new stage in Hamas-Egyptian relations, which, he said, have been marred by tensions due to unproven Egyptian accusations of Hamas promoting chaos and disorder in Sinai.

Also according to Sawaf, even though Hamas belongs to the Muslim Brotherhood, which the Egyptian regime considers a terrorist group, Cairo is differentiating between the two because it believes Hamas cannot be overlooked in a political solution of the Israeli-Palestinian conflict.