Egyptian media has renewed its attacks against Hamas following an investigative report by Al Jazeera accusing Egypt of tightening the siege on Gaza. 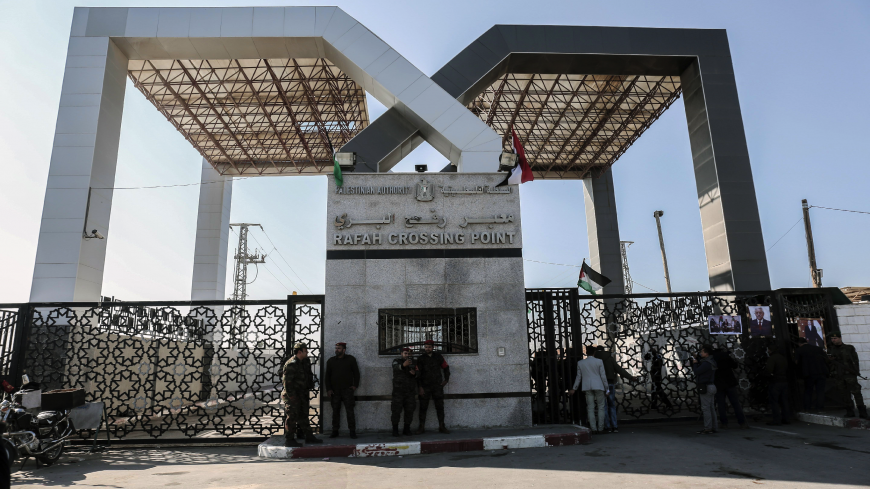 Palestinian security forces loyal to Hamas stand guard outside the Rafah border crossing with Egypt, under the control of the Palestinian Authority, on Dec. 16, 2017. - SAID KHATIB/AFP via Getty Images

GAZA CITY, Gaza Strip — Many Egyptian media outlets have renewed their attacks against the Palestinian Hamas movement after remaining silent for about a year and a half in light of a state of rapprochement witnessed between Egypt and Hamas during that period.

The Egyptian media attacks came a few days after the Qatari Al Jazeera channel broadcast an investigative report on Sept. 13, which accused Egypt of helping to tighten the noose on Hamas in the Gaza Strip and preventing the supply of weapons by establishing a buffer security zone along the border with Gaza.

The media attacks also coincide with the success of the Qatari mediation behind the truce agreement reached between Hamas and Israel on Aug. 31, while the Egyptian intelligence failed in this regard. Meanwhile, Qatar also vowed to increase and renew the financial grants provided to Gaza for an additional six months and pressure Israel into implementing humanitarian projects in the enclave.

This is in addition to Ismail Haniyeh, the head of Hamas’ political bureau, criticizing on Aug. 21 Egypt’s support for the normalization deals between Gulf countries and Israel.

The Egyptian media has highlighted the tight relationship between Turkey, Qatar and Hamas, and accused the latter of exploiting the Palestinian cause in exchange for Qatari financial grants provided monthly to the Gaza Strip.

Another reason behind the media attack against Hamas may be Haniyeh’s visits to a number of countries, namely Iran, Turkey and Lebanon, while Egypt had authorized back in December 2019 Haniyeh to travel on the condition that he not visit those specific countries.

On Sept. 21, Haniyeh concluded his visit to Lebanon — which lasted 20 days — after meeting officials from official institutions and parties, including Hezbollah Secretary-General Hassan Nasrallah on Sept. 6. He then flew to Turkey on Sept. 21, where he held talks with the Fatah movement in Istanbul.

Meanwhile, an Egyptian parliamentarian agreed to speak to Al-Monitor in this regard on the condition of anonymity. He said the state of tension in the relations between Hamas and Egypt has been the same for decades, stressing that the Egyptian leadership and intelligence did not and will not change their position toward Hamas given the latter’s ideology and affiliation with the Muslim Brotherhood.

The source added that Hamas and its policies are harming the Palestinian cause, which Egypt is seeking to preserve in light of the ongoing internal Palestinian division. He further said that Hamas has accepted Qatari money in return for stopping its armed attacks against Israel, and it (Hamas) is even protecting the borders with Israel by preventing other armed factions from carrying out any armed operation against Israel.

The source noted that even Hamas’ position toward Egypt has not changed. He said that Hamas allowed Al Jazeera journalists to film the construction works Egyptian armed forces are carrying out along the border with Gaza to protect Egyptian national security and prevent the smuggling of arms and extremists from Gaza into the Sinai Peninsula, with the aim to tarnish Egypt’s image and accuse it of tightening the noose on Gaza.

On another note, the Egyptian media attack came despite the Egyptian intelligence mediation between Hamas and Israel on a new prisoner exchange deal. Yet these talks did not achieve any progress in light of the widening gap between the two sides (Hamas and Israel) and their insistence on their own conditions. As a result, the talks on a prisoner swap deal have been postponed until after the Jewish holidays.

Mustafa al-Sawaf, a political analyst and former editor-in-chief of the local Felesteen newspaper close to Hamas, told Al-Monitor, “There are goals behind the Egyptian media remaining silent or launching attacks against Hamas. There are Egyptian political and security arms that provide [the media] with information regularly.”

Sawaf believes the Egyptian media attack came after Egypt failed in the latest truce understandings between Hamas and Israel, while the Qatari mediation was successful. He said Egypt fears Hamas will completely turn to the Qatari-Turkish axis and turn its back to any Egyptian efforts in the Palestinian file.

He believes the media attacks will not last long since Hamas is refusing to respond to it and Egypt wants to keep sponsoring the Palestinian file and the relations between Hamas and Israel.

Talal Okal, a political analyst and writer for the Palestinian al-Ayyam newspaper, agreed with Sawaf. He told Al-Monitor the media attack is not surprising since relations between Hamas and Egypt are more out of need rather than strategic given the geographical proximity between the two parties. He also said Egypt does not want to give up the Palestinian file for another country like Qatar or Turkey to pick up.

Okal believes the Egyptian media attacks aim to pressure Hamas not to join the Qatari-Turkish axis and to push the movement into offering some concessions in the prisoner swap deal for Egypt to mark a point after its latest efforts in the truce file failed.

Despite the media tension, it seems the two parties are not heading toward a rupture, as happened after Egyptian President Abdel Fattah al-Sisi assumed power, because both parties need each other in some files, including the security one.