Israel has warned Egyptian intelligence that Hamas operatives in the West Bank are fueling demonstrations and conducting lone-wolf operations there. 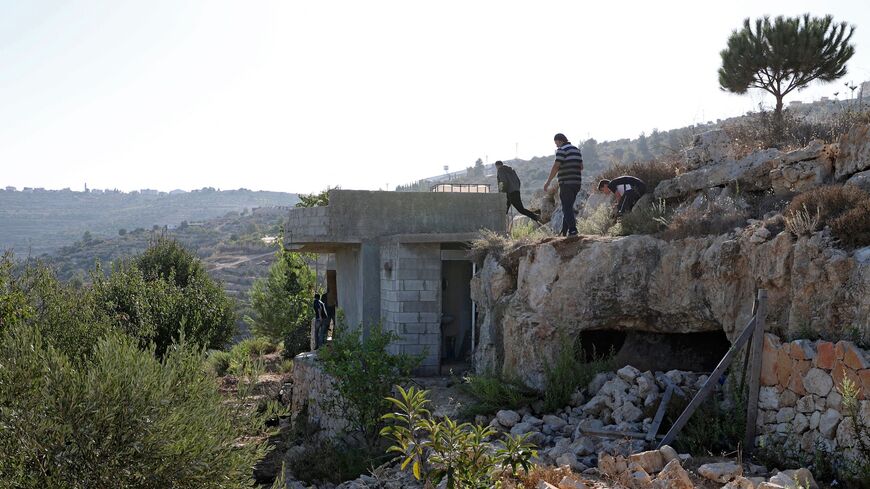 Palestinians gather at the site where three Palestinian where killed during clashes with Israeli forces in the village of Beit Anan, in northwest Jerusalem on Sept. 26, 2021. - ABBAS MOMANI/AFP via Getty Images

Hamas operatives seem to have renewed their activity in the West Bank in response to Israeli raids in the wake of the recapturing of six Palestinians who escaped an Israeli prison in September.

The recent raids of West Bank villages reveal Israel’s concerns over Hamas’ renewed activities. On Sept. 26, Israeli forces killed three Palestinians in the village of Biddu, north of Jerusalem. According to the Israeli military, the three men were part of Biddu cell planning to carry out attacks against Israeli targets.

Israel sent a warning via Egyptian intelligence, accusing Hamas of attempting to inflame the situation in the West Bank by fueling demonstrations and conducting lone-wolf operations against Israel, Rai al-Youm newspaper revealed on Sept. 28.

The London-based newspaper cited anonymous sources as saying that Israel warned in an urgent message via Egyptian mediators that Hamas will pay a heavy price if it continues to inflame the situation in the West Bank and the Gaza Strip and that all the economic incentives announced in early September to instill calm in Gaza will be halted.

The Israeli goodwill gestures toward the Gaza Strip included expanding the fishing zone from 12 to 15 nautical miles, reopening the Kerem Shalom commercial crossing, allowing goods and equipment in, increasing the number of merchants and workers allowed to work in Israel to 7,000 and increasing the water supply to Gaza by 5 million cubic meters.

Egypt brokered the cease-fire that ended the latest conflict between Israel and the Palestinian factions on May 20. Israel had announced that the truce would be “reciprocal and unconditional,” while Hamas and the Palestinian Islamic Jihad agreed to a “mutual and simultaneous” truce.

On May 31, Egypt's intelligence chief Abbas Kamel visited Gaza for the first time since the early 2000s and met with the leader of Hamas in the Gaza Strip, Yahya Sinwar, to advance the cease-fire and discuss reconstruction plans and the issue of Israeli soldiers detained in Gaza.

On Sept. 15, the Lebanese Al-Akhbar newspaper revealed that an Egyptian security delegation visited Gaza with the aim of advancing Israeli Foreign Minister Yair Lapid’s “economy for security” plan, which calls for the reconstruction of Gaza in exchange for the disarmament of Palestinian factions. But the latter vehemently rejected the plan.

On Sept. 23, Egypt began the first phase of the Gaza reconstruction process, for which Cairo pledged $500 million. Egyptian workers, who had been in Gaza for nearly two months, have removed 270 tons of rubble resulting from the most recent conflict.

A Hamas delegation arrived in Cairo on Oct. 3 to discuss advancing the truce with Israel and a possible prisoner swap deal between the two parties.

Ayman al-Sharawneh, a Hamas leader in Gaza, revealed to Al-Monitor that the Hamas delegation will meet with Egyptian intelligence officials during its visit to Cairo to discuss “the developments in the Palestinian territories, a prisoner swap deal with Israel, the Israeli incentives for Gaza and the lifting of the Israeli siege imposed on Gaza.”

Sharawneh said that the three young men that Israel killed in Biddu were indeed affiliated with Hamas but denied there had been any official coordination between them and Hamas in Gaza.

He said Hamas operatives in the West Bank are working to resist attacks by the Israeli military and settlers against Palestinians.

Commenting on Israel's threats to cancel the incentives package, Sharawneh said, “The Gaza reconstruction process has started and Israel will not be able to stop it.” He added, “The Palestinian resistance in Gaza will not stand idly by if the siege intensifies and if the incentives are halted.”

Wissam Afifeh, a political analyst close to Hamas, told Al-Monitor, “The latest cease-fire agreement is only for the Gaza Strip and [should not affect] any other arena in the Palestinian territories.”

He added, “The Israeli policy of dividing the Palestinians has failed, as evidenced by the fact that the fourth Gaza war broke out in response to the developments at Al-Aqsa Mosque and in the Sheikh Jarrah neighborhood.”

On the impact of the Israeli threats on the truce and reconstruction talks, Afifeh said, “The implementation of the cease-fire is going through ups and downs. The mediators [Egypt and Qatar] are trying to maintain a minimum level of stability to delay an implosion of the situation, and their efforts succeed at times and fail at other times.”

Talal Okal, a political analyst and writer at the Palestinian al-Ayyam newspaper, told Al-Monitor that “Bennett does not mind [the incentives] because he wants economic peace. As long as Hamas and the factions do not fire rockets and do [use other] coarse means, Israel will remain committed.”