Egypt is stepping up efforts to reach an agreement to stop the escalation and violent fighting between the Palestinian factions and Israel, amid ongoing international calls for a cease-fire. 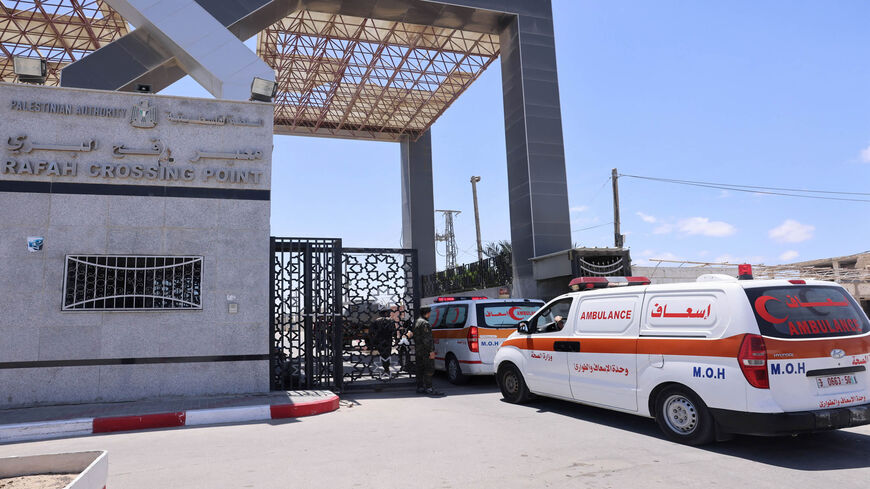 Ambulances evacuating injured Palestinians to Egypt for treatment arrive at the Rafah border crossing with the neighboring country, in the southern Gaza Strip, May 17, 2021. - Said Khatib/AFP via Getty Images

CAIRO — Egypt is stepping up efforts to reach an agreement for de-escalation and quelling the violence between Palestinian factions and Israel, amid ongoing international calls for a cease-fire.

An Egyptian official and a Hamas official told Al-Monitor on condition of anonymity that Cairo is continuing its daily calls with the fighting parties, in an attempt to reach some form of cease-fire — but no such breakthrough has been made yet.

On May 16, Egyptian Foreign Minister Sameh Shoukry said that his country will spare no effort to reach an Israeli-Palestinian cease-fire. Speaking via video call before the UN Security Council, Shoukry stressed the need for an immediate cease-fire in the Palestinian territories.

Israel continues to wage its fiercest air raids on the Gaza Strip since the outbreak of the current round of violence on May 10. Meanwhile, Palestinian militants continue to launch rockets on Israeli territories.

The violence over the past week is considered one of the worst between Gaza and Israel since the 2014 war. This comes weeks after rising Israeli-Palestinian tensions in East Jerusalem, which peaked during clashes at Al-Aqsa Mosque compound.

In response to the events in Jerusalem, Hamas, which controls the Gaza Strip, launched rockets toward Israel after sending out warnings to Israel to withdraw from Al-Aqsa Mosque compound. The movement says its rocket attacks came amid what it saw as Israeli provocation after weeks of tensions due to an Israeli court order to evict Palestinian families from the Sheikh Jarrah neighborhood in East Jerusalem. Israel responded with retaliatory airstrikes against the Gaza Strip. Meanwhile, fears of a civil war inside Israel are looming, in the wake of direct clashes between Arabs and Jews.

On May 14, the United Nations stated that 10,000 Palestinians have fled their homes in Gaza as a result of the fighting. UN Humanitarian Coordinator in the region Lynn Hastings said that people have sought refuge in schools and mosques, amid difficulty to access food, clean water and health care.

Amid the escalating violence, Egyptian authorities opened May 16 the Rafah border crossing with the Gaza Strip, in a show of solidarity with the Palestinian people, state-run news agency MENA reported. A number of equipped ambulances have transported several injured from Gaza into Egypt to receive treatment.

On May 15, Egyptian Foreign Ministry spokesman Ahmed Hafez said that Egypt is engaged in ongoing talks with the concerned parties and is deploying persistent efforts to reach a cease-fire in the Palestinian territories. In TV statements to the Qatari Al Jazeera channel, he noted that stopping the bloodshed is the current priority for Egypt, stating that Cairo is also communicating with the concerned international parties, specifically the United States, to solve the crisis.

“The recent developments have proven that it is important to reach a comprehensive political solution based on the two-state solution. We must address the root of the problem to break the chain of action and reaction between the conflict parties,” he continued.

Egypt often plays the role of mediator between Israel and Hamas, and it was a key player in ending past rounds of fighting.

Hamas spokesman Fawzi Barhoum said that Egypt is making huge efforts to stop the “Israeli aggression on the Palestinian people.” He told Al-Monitor that the Egyptian efforts coincide with similar efforts from Qatar and the United Nations.

Barhoum blamed Israel for the failure to reach a cease-fire thus far. He said that Hamas and other Palestinian factions are dealing “responsibly” with the mediation efforts. But these efforts “still clash with the Zionist criminal mindset, which is only after more bloodshed, destruction of houses and killing people,” he said.

In a televised speech on May 15, Israeli Prime Minister Benjamin Netenyahu stressed that Israel will continue to shell Gaza as long as necessary until Palestinian factions stop their rocket attacks.

The Israeli raids are targeting several locations of the armed Palestinian factions, while several leaders of Izz ad-Din al-Qassam Brigades, Hamas’ military wing, and Islamic Jihad have been killed. The Israeli army announced May 15 that it had shelled the house of Hamas leader Yahya Sinwar.

On May 12, Shoukry condemned the Israeli attacks on Palestinian territories in a phone call with his Israeli counterpart, Gabi Ashkenazi. He said that it is important for both parties to avoid escalation and military methods.

Barhoum said that Hamas and the “resistance forces” want to fulfill the hopes and aspirations of the Palestinian people to halt the aggression completely and remove Israel’s grip on the people of Jerusalem and Sheikh Jarrah, as well as end all forms of incursions and violations of sanctities and Al-Aqsa Mosque compound.

Israel considers Jerusalem its capital, while Palestinians are demanding East Jerusalem as a capital for their future state.

Tarek Fahmy, a professor of political sciences at Cairo University and director of the Israeli-Palestinian Studies Unit at the National Center for Middle East Studies, said that Egypt is the only state capable of making a breakthrough in the current crisis because it can take action freely and without pressure from the conflict parties.

He told Al-Monitor that reaching a cease-fire will not happen overnight, as some believe, because each side is insisting on dictating its conditions to accept a truce. He said, “Communication channels will remain open between Egypt and the Palestinians and Israelis at the diplomatic and intelligence levels, until a satisfactory truce agreement that can be built upon is reached.”

Media reports indicated that an Egyptian security delegation traveled to the Gaza Strip and Tel Aviv May 13 to meet with Hamas and Israeli leaders to broker a cease-fire deal. But Al-Monitor’s correspondent found out from a reliable source that Cairo did not send a delegation, contrary to what has been circulated in the past days. He noted that the Egyptian administration is continuing its calls with the warring parties to halt the fighting.

On May 15, the Israeli army said that the armed Palestinian factions have launched around 2,300 rockets from Gaza since the onset of the fighting. It noted that the Iron Dome intercepted around 1,000 rockets and that 380 fell in the Gaza Strip. Israel launched more than 1,000 air and artillery raids on the densely populated coast in Gaza to target Hamas.

The White House said that Biden spoke on the phone with Netanyahu and Palestinian President Mahmoud Abbas May 15 and filled them in on the US diplomatic efforts. Despite Biden’s calls to halt escalation, he had expressly supported Israel’s campaign against Hamas and said May 13 that Tel Aviv has the right to defend itself.

However, any mediation is complicated by the fact that the United States and most Western powers do not negotiate with Hamas, which they consider a terrorist organization. Abbas, whose power is concentrated in the West Bank, has little sway over Hamas in the Gaza Strip.

“This is where the role of Egypt and the importance of its current mediation come in,” Fahmy said.

Washington is counting on the role of Arab countries that have communication channels with Hamas to play a decisive role, and Washington has called on Egypt, Tunisia, Qatar and others in the Arab region to help restore calm in the Middle East, according to White House Press Secretary Jen Psaki on May 13.

US Secretary of State Antony Blinken discussed the violence in Israel, the West Bank and Gaza in phone calls with the Qatari, Egyptian and Saudi foreign ministers, the State Department said on Sunday, May 16.

Fahmy said that the prospects for the success of the Egyptian mediation depend on two things. The first one is the US pressure on Israel to accept a truce and stop the escalation, which is currently unlikely. He believes that the US administration is dealing recklessly with the Arab-Israeli conflict in the absence of a clear vision about it. The other is related to a more supportive and encouraging Arab position for Egyptian efforts, notably from Jordan, he concluded.